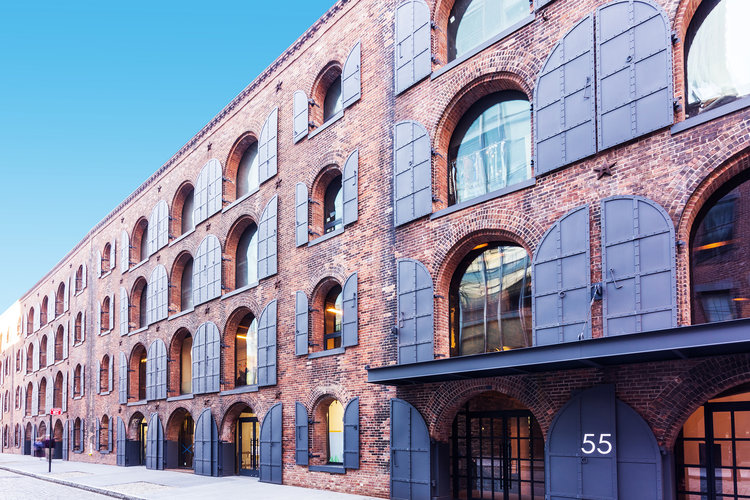 M&T Bank, in conjunction with the Brooklyn Bridge Park Development Corporation (BBPDC), has provided a $217 million financing package in the form of a land loan to developer Midtown Equities—in partnership with Rockwood Capital and HK Organization—to refinance Empire Stores, a mixed-use development at 55 Water Street, along Brooklyn’s East River waterfront in Dumbo, according to records filed yesterday with the city’s Department of Finance.

BBPDC, a subsidiary of Empire State Development Corporation (ESD), a state sponsored entity, acted as a co-lender and co-mortgagee with M&T Bank on the refinancing, a source close to the deal confirmed to CO. M&T Bank provided the loan proceeds to the developers, and post-closing, BBPDC assigned all its interest in the loan to M&T Bank, the source said. BBPDC is the ground lessor of the property—leased to the City of New York—and the developers will pay a Payment in Lieu of Taxes (PILOT), which will be remitted back to the city.

The package consolidates and replaces roughly $117 million in previous debt from M&T Bank and includes a new, $101.3 million leasehold gap mortgage, a $9.1 million project loan and a $18.5 million building loan. The new debt replaces two building loans and two project loans previously made by M&T Bank and the BBPDC in October 2014 and in May 2016.

In September, Commercial Mortgage Alert first reported that M&T Bank had agreed to provide a $250 million, floating rate loan to the Empire Stores development trio. The loan—arranged by Eastdil Secured—had a term of five years, including extension options.

After sitting dormant for several years, the 443,000-square-foot complex, running from 53-83 Water Street in Dumbo, was reopened in the summer of 2016. The three-firm development team secured a bid to redevelop the site in 2013 and signed a 96-year ground lease with the city.

Constructed in “phases” from 1869-1885, according to information from the Empire Stores website, the property’s seven brick warehouses were formerly used for coffee and tobacco storage until the 1960s. The mixed retail and office complex is anchored by furniture and home decor store West Elm, which has leased 137,374 square feet at the location for its headquarters and a retail portion. The property has 584,864 square feet of rentable space, according to CoStar Group.