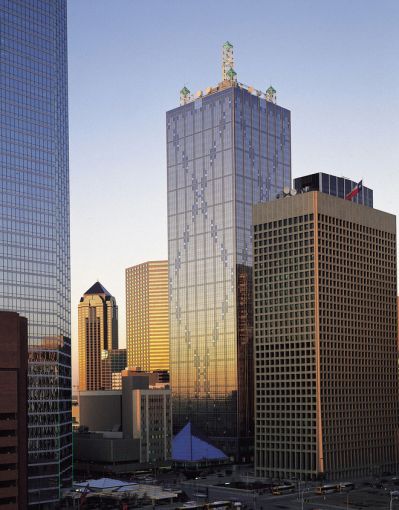 Square Mile brought in Bank of the Ozarks to take a senior portion of the loan, which will be used to repay an existing CMBS loan on the property and bridge the asset through stabilization.

HFF’s Whitaker Johnson and Steve Heldenfels arranged the financing on the dazzling tower, outside shots of which depicted the fictional home of Ewing Oil in the 1980s television series Dallas.

SMA Equities and The Moinian Group have owned the building since 2006. The previous loan was securitized in the Wachovia Bank-sponsored WBCMT 2006-C29 CMBS deal and split into a $64.5 million A-note and a $64.5 million B-note.

The Environmental Protection Agency also recently signed a 20-year lease for 229,000 square feet at the property, and the tenant is scheduled to move in December 2018.

“We are excited to establish a lending relationship with SMA Equities and The Moinian Group on this transaction,” Square Mile Principal Matthew Drummond said in prepared remarks. “As Downtown Dallas continues to benefit from additional redevelopment and as evidenced by the recent signing of the EPA lease, Renaissance Tower is well positioned as a cost-effective alternative to other high-quality office buildings located in submarkets such as Uptown and Plano.”

“We received extremely competitive financing packages from multiple sources but ultimately closed with Bank of the Ozarks and Square Mile,” a spokeswoman for The Moinian Group told CO. “The terms gave us the flexibility we required to complete lease up of our Class-A office tower.”