Loft Landing: Inside the Mayor-Backed Fight to Protect the City’s Artists Lofts 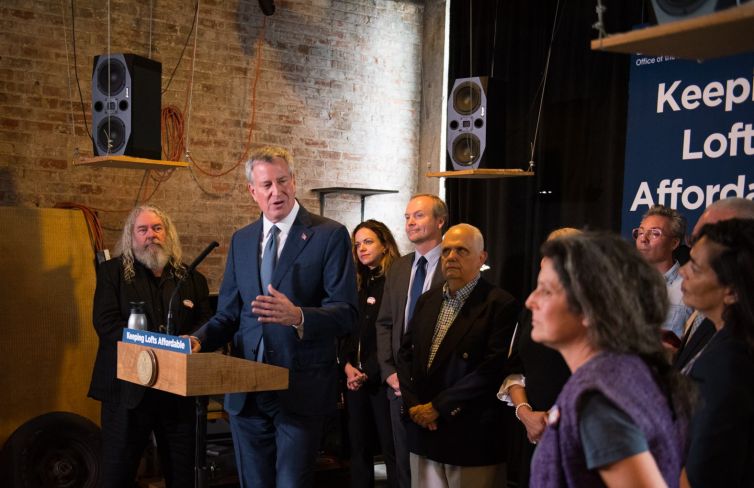 Just shy of two weeks before Election Day and with victory a foregone conclusion, Mayor Bill de Blasio turned his attention to the future of the artists of New York City.

The mayor hunched his body into a creaky freight elevator inside 475 Kent Avenue—a South Williamsburg former factory home to scores of painters, sculptors and photographers—rode up to a ninth-floor studio and announced the city would change how it regulates loft spaces.

De Blasio has never lived in a loft himself, but his wife is a poet and both speak frequently about the vital contributions that the city’s artists have made in shaping New York’s identity.

“This is about making sure the people who make New York City great can afford to live here. We don’t want to lose one of the most essential parts of New York City,” de Blasio said at an Oct. 25 press conference, standing in front of a sign that read “Keeping Lofts Affordable” inside a studio at 475 Kent Avenue.

At the press conference, de Blasio revealed three ways he wants the city to modify how it follows the Loft Law, a state law that gives rental protections to prevent landlords from raising rents willy-nilly on about 10,000 tenants living in formerly industrial loft units. Per the mayor’s proposal, the city would make tenants prove their loft space is their primary residence; allow all occupants of a loft, including family members, to apply for legal protection; and keep units under rent-regulation even if a tenant takes a buyout.

The mayor blamed the Bloomberg administration for inadvertently reducing the number of rent-regulated lofts by 30 percent in the last 15 years.

“The sad reality is we lost those protections not by accident,” he said. “It was a series of choices made at the state level and made by the previous mayoral administration that really favored the private sector over the needs of tenants.”

And he declared that artists deserved to live in the warehouse spaces they inhabit while lambasting landlords for pricing them out of their neighborhoods.

“We have to make it harder for landlords to take buildings market rate,” de Blasio continued. “Once a loft is out of rent-regulation forget it; it’s never going to be affordable again. We’re fighting for every single loft.”

The next day, a couple who runs Williamsburg dance studio Cave 12 at 58 Grand Street—about half a mile north of where the mayor stood at 475 Kent Avenue—saw their legalization application rejected by the state legislature-enacted New York City Loft Board, which regulates conversions of industrial spaces to residential ones. Board members argued that the basement-level arts space lacked external windows because it had a retractable steel gate that rolled down in front of a wall with windows.

Ximena Garnica, a choreographer and one of the Cave tenants for more than two decades, called the reasoning “absurd.” She removed the gate and is currently appealing the decision.

“How is it possible that this hyper-technicality could undermine the original intention of the law? Our space has windows,” Garnica told Commercial Observer. “Everybody who sees a picture of the building says, ‘What? I don’t understand.’ Just because of the windows, we’re ineligible for coverage?”

The challenges that artists face to live and work in an affordable part of the city have become almost insurmountable.

Owners continue to scour rapidly gentrifying neighborhoods for workaday warehouses they can gut and redevelop for wealthier tenants. And the pressures of New York’s rising cost of living has caused many artists to move upstate, out west or abroad in search of an affordable community.

New Yorkers who live in large commercial warehouses have since 1982 been able to petition the city to legalize their apartments, bring them up to code and become rent-regulated tenants (although the original law was mostly limited to buildings around Soho). A 2010 revision brought thousands of outerborough tenants under the law’s auspices, though the law limited protections to those in three of the city’s 16 industrial zones—in the Brooklyn neighborhoods of Greenpoint and Williamsburg and in Long Island City, Queens—and added a number of exemptions including a requirement for windows to face the street or a yard.

But the political tide steadily rising against artists may be turning.

City Hall has engaged with artist activists over regulations after activists asked the mayor in mid-November, after the election, to revise his proposed Loft Board recommendations.

Forcing tenants to prove that their loft has been their primary residence in order to receive coverage is an onerous burden, advocates have argued since 2009. Instead, they want the city to clarify what constitutes an incompatible use for residential living, such as having a working factory in the building, and consider a new building code just for live-work spaces.

“Our buildings are live-work buildings, not apartment spaces, and you cannot apply the same type of building code to a brand new apartment building,” said 475 Kent Avenue tenant activist Eve Sussman, who hosted the mayor for his October press conference at her studio. “All of these code issues cause snarl ups and cause [New York City Department of Buildings] plan examiners to reject plans to codify and legalize live-work space.”

Others want the Loft Board to stop ruling on new cases until the city revises its regulations.

“It’s like trying to change a tire while driving a car,” Garnica said.

Tenant leaders and advocates met with City Hall officials two weeks ago to discuss what regulatory changes they would like the Loft Board to make, and sources told CO that the Loft Board has tabled discussions on the recommendations until the mayor submits new ones. A de Blasio spokeswoman said conversations with tenant advocates are “ongoing.”

As city bureaucrats and tenants haggle over enforcement, state lawmakers will try to make an even wider swath of loft buildings legal.

The Democratic-controlled Assembly passed a bill in June removing some of the limitations in the 2010 law, but it never got out of the Republican-controlled Senate Rules Committee. Democratic lawmakers had tried to make a deal linking the Loft Law revision to a Republican-friendly bill, but nothing materialized.

“The Senate doesn’t pass any tenant legislation unless they get something for landlords. They weren’t interested in a bill giving tenants more protections than they already had,” said Assemblyman Joe Lentol, who is pushing for a Loft Law revision. “If anyone thinks anything will get enacted on the merits, they should know better when it comes to tenant protections. That’s sad but it’s true.”

But the Senate may not be in Republican hands three months from now.

Gov. Andrew Cuomo and Democratic leaders have been working to reunify a group of eight breakaway Democratic senators, who caucus with Republicans, with the mainline conference. With another rogue senator, Brooklyn’s Simcha Felder, they could effectively wrest control of the upper chamber from the GOP and determine what legislation reaches the floor.

In the meantime, Senate Republicans say that the Loft Law remains “under consideration” as they await de Blasio’s 2018 legislative agenda.

“We’re willing to look at what he gives us,” said Senate Housing Committee Director Lorrie Pizzola. “We’re glad to work with him and all the sides in the process to see what we can do on the Loft Law or other housing initiatives.”

Tenants are cautiously hopeful that the law will be revised in a way that protects new artists and keeps others in their current spaces.

“We have an equal shot at both and it’s just about tenants staying vigilant in Albany and with the mayor’s office,” Sussman said. “But we can’t take a year to decide these things. We need to figure it out in the next couple months. Otherwise people could lose their homes.”