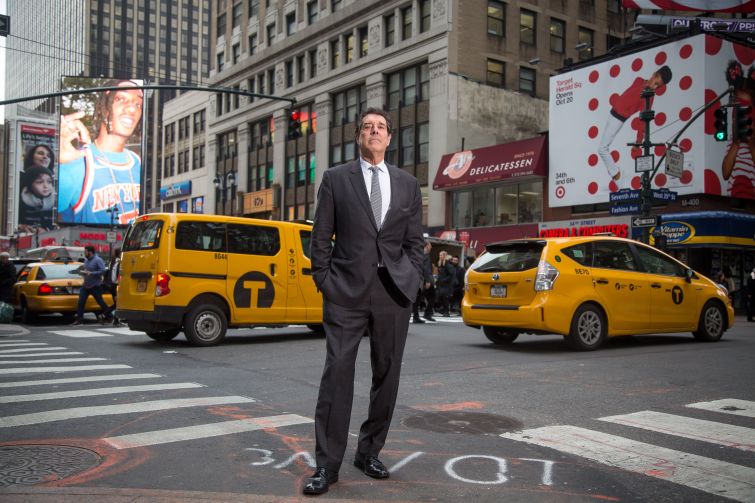 Richard Smith, a senior director at Winick Realty Group, is an old-school operator in all the best ways, relying on shoe leather and people skills to score new business through cold calls, relentless networking and building relationships face to face.

Smith, 62, grew up in Hewlett, N.Y., in the Five Towns section of Long Island. His father, Al Smith, manufactured brooms and mops. (He was not the four-time governor of New York.) Richard spent his Saturdays as a child playing in his father’s broom factory in Canarsie, Brooklyn, while Al played cards with friends.

Always idolizing his dad, the younger Smith got caught up in the excitement of business in 1969, when his father took his company, Ace Industries, public.

“It really drew me in when he got involved in Wall Street, because it was very exciting,” said Smith, who lives on the Upper West Side with his wife of 31 years, Rhonda. “It was really big business, and it made me understand that business wasn’t just going to your office every day; it was Wall Street and financial information that flowed. That really got me going.”

His father’s experiences wound up being educational for reasons other than he expected. Smith entered Boston University in 1973 and expected to join his father when he graduated with a business degree four years later. But Ace closed in 1975, and he got to watch as his father dealt with the aftermath of a disaster.

“He went out of business, and he paid every dime he owed to everybody,” Smith said of his father, who passed away in 1993. “He wanted his reputation to be intact no matter what. I learned that from him.”

Smith worked a few retail sales jobs before entering the garment industry. He sold fabrics at a small company called Holland Fabrics for five years before opening his own firm, Ace Fabrics (the name was an homage to his dad’s company), where he worked as a jobber.

In the garment industry, jobbers sell fabric companies’ excess runs and, as such, are limited in how much they can sell. The big money went to converters, who bought raw fabric in bulk, and could take unlimited orders.

Seeking to grow to the next level, Smith caught a break from the son of one of his mother’s friends.

“My mother spoke about this gentleman my whole life, and we never knew each other,” he said. “He was in the garment center, and his mother kept bragging to my mother about how much money he was making. And my mother would say to me, ‘What’s wrong with you? This guy is making so much money.’ ”

Eventually, Smith met the man, whose name was Howard Rosenblum, and he joined Smith at Ace Fabrics, bringing along experience and clients as a converter. The pair worked together for 20 years and grew the business to the point where they were averaging $18 million a year in sales.

Beginning around 2000, China’s growing prominence in the garment market undercut their prices, and business tapered off. By 2006, Ace was barely scraping by, and Rosenblum left the company to shift into real estate, renting office space.

Smith kept Ace going until 2008 and then followed Rosenblum into real estate by joining Winick.

While they no longer work together, the former partners still speak every day. Rosenblum described Smith as a man he’d trust with his life.

“He was a very hard worker and a very tough negotiator,” Rosenblum said. “He was honest, and he was tenacious.”

Rosenblum said that over about 20 years of partnership, there was only one squabble they ever got into.

“There was a customer around 20 years ago who took advantage of me—he low-balled me, and I gave him a lower price. Richard would not accept the order because he knew I was being taken advantage of,” Rosenblum said. “He called the customer behind my back and got more money. I almost dissolved the partnership because he went over my head. But my anger only lasted a day because I realized he was right.”

By the time he entered real estate, Smith had a base of the business-related skills that are essential to success in the industry, foremost among them the building of personal relationships and a strong, unwavering work ethic.

Starting in real estate at 52, some still called the father of three daughters (Sarah, now 25, and twins Phoebe and Emma, 21) “Kid.”

Smith said he did no business at all his first year, supporting himself with savings, but used door-to-door cold-calling to develop relationships with landlords and potential tenants throughout the city.

“I was a very personable person, and we got to know each other,” he said of people he met along the way. “So if we did business or not, it wasn’t that important. It was important that they knew who I was, and I knew who they were, and we had a relationship.”

His efforts began paying off a year and a half into his tenure at Winick.

Walking by a Korean deli on West 34th Street that had been taking a year to build out, he introduced himself to the owner, a Korean man named John Chun who spoke almost no English and joked with him about how long his buildout had been taking.

Despite the language barrier—Chun sometimes has one of his managers translate—they became friends and Smith began bringing him deals. Sitting with one landlord asking Chun for $80,000 a month in rent, Smith felt the landlord was disrespecting his client with his timing.

“Everyone has to give permits and plans to the landlord to sign,” Smith explained. “The landlord wanted 21 days from when he got the papers to sign them and give them back to my guy. Three days was standard in the market. My guy [would have been] paying $80,000 a month. You have three sets of papers to sign, so if it takes him 60 days to sign all the papers, that’s over $150,000 in rent. The guy said, ‘That’s the best I’m doing.’ I said, ‘We’re out of here.’ I take my tenant and I walk out.

“[Chun] says, ‘Richard, what are you doing? How much money are you losing on this deal?’ I said, ‘Nothing. He’s not being fair with you. It’s going to cost you money, and I’m not interested in doing it. It’s not the deal I want for you.’ To make a long story short, within a year, we got that deal. That goes back to relationships. [My clients] want to do business with me because they know I care about them.” The space became Café Hestia at 513 Seventh Avenue at West 38th Street.

These are the sorts of relationships that helped Smith gain a foothold in real estate.

“I’ve done 10 deals with this guy, and this is a guy I cultivated from nothing,” Smith said. “It wasn’t like I’ve known him since I was 20 years old. I started with him, and we built up, and I have 10 of those guys now.”

This attitude has fueled a steady book of business for Smith.

“It all comes down to his training from his previous career in the garment center,” said Steven Baker, Winick’s president.

“Richard is the kind of guy who just walks into a store and introduces himself, and before you know it, he’s transacting with that tenant. Richard is very results-oriented. We see the fruits of his hard work.”

While Smith does transactions throughout the city, much of his business comes through his old haunt, the Garment District, and he said he finds himself there every day.

Despite the city’s ever-rising rents, Smith said there are still bargains to be had in the Garment District.

“Now it’s catching up, but for a long time there was a very, very good bargain over there—the best bargain in the city,” he said.

“With retail now on a downturn, the garment center never got to the point where [rent prices were] ridiculous,” Smith said. “So they can go down a little bit, and it’s very fair. The places that are ridiculous—the Madison Avenues, the Sohos—they got up so high that even if the rents come down a little bit, it’s still ridiculous. The garment center never got there. So now, the rents are reasonable. You go on a side street, $100 a square foot, you find a beautiful place. You can’t beat it. It’s still the best deal in town.”

In terms of deals, Smith’s strong relationships keep him busy, including a lease signed in September for 8,000 square feet—4,000 on the ground, 3,000 on the mezzanine and 1,000 in the basement—at 248 West 35th Street for Chun, his Hestia client, who sought to open a karaoke place, called Muses 35 Bar, by year-end. Smith said he did the deal at around $100 per square foot for 15 years.

Steve Kaufman, the president of the Kaufman Organization, has done several deals with Smith and said his dedication to knowing the market makes him a valuable business partner.

“I met Richard probably 10 years or so ago,” Kaufman said. “He did a big leasing transaction with us when he rented a big store in our building at 450 Seventh Avenue to Duane Reade in 2013.”

Kaufman added, “He’s proved to be a very good store broker. He works hard, he has good relationships with his tenants and landlords, and he keeps his finger on the pulse of the market.”

For Smith, chasing deals of this sort—simple, what he calls “unsexy” deals that create a positive long-term situation for clients and landlords he’ll continue to be in touch with for a very long time—is the path to business success.

“Every day, I’m calling every one of my relationships up and speaking to them and having conversations and going to visit them and having coffee,” he said. “Every time I go in there, I’m building more and more of a relationship with them. If we don’t discuss business, we can discuss their kids, their future plans, whatever they choose to discuss. I enjoy all of that. Obviously, you want to do business and make money. But if I’m having a successful week, I’m seeing my clients and getting new clients and meeting new landlords. That, for me, makes it successful.”