Greek Drama: Construction on WTC Shrine Grinds to a Halt Amidst Financial Scandal 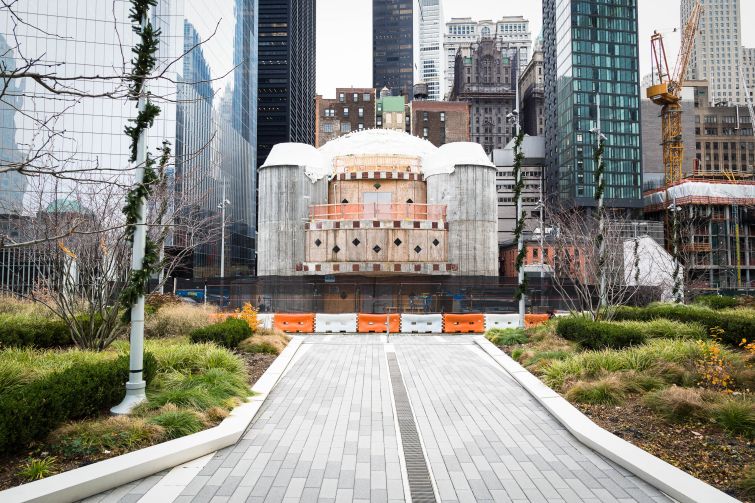 After a year of financial turmoil for the Greek Orthodox Archdiocese of America, construction lurched to a stop last week on the institution’s St. Nicholas National Shrine near the World Trade Center, calling into question the future of the 16-year project to replace a chapel destroyed in the Sept. 11 attacks.

Skanska USA, the lead construction firm on the project, announced in a letter to subcontractors that, because the church has missed a series of scheduled payments in recent months, workers must put down their tools at the site—at 130 Liberty Street in Liberty Plaza Park—until continued funding is assured.

“Effective Dec. 5, 2017, Skanska USA has terminated its contract with the Greek Orthodox Archdiocese of America on account of GOA’s defaults in making payments,” Thomas Perry, the director of the project, said in the letter. “Skanska is demobilizing from the project site.”

The letter, first reprinted on a Greek community website, The Pappas Post, called on subcontractors to depart the site and warned workers that they may not be able to recover any tools left behind.

“Skanska is continuing its pursuit of payment from [the church]…together with any other remedies,” Perry wrote.

The firm declined to comment further for this story.

Sources close to the construction process said that the payment defaults resulted from a financial scandal that plagued the archdiocese this year.

As reported on The Pappas Post, which described the situation as an “unprecedented crisis,” an email to the archdiocese’s managing council from Michael Psaros, its treasurer, admitted that the organization “lacked even the most basic internal controls with respect to expenditures, vendor and travel management and other basic matters of basic corporate governance.”

As a result, the church’s leaders were unhindered as they misappropriated segregated or restricted funds to pay for the travel expenses of the church’s spiritual leposader, Archbishop Demetrios, and other administrative costs, according to the email. Some of those funds, The Pappas Post reported, were earmarked for construction at the St. Nicholas National Shrine.

“The archdiocese is working expeditiously and diligently to address its financial challenges, all of which are controllable and manageable,” the church said in a statement posted on its website last Friday. “Unprecedented actions have been taken in both substance and speed to re-establish…trust [with congregants].”

The committee “will investigate and evaluate…the potential use of certain St. Nicholas Shrine restricted funds for the payment of archdiocesan general operating expenses,” according to the statement.

“We’re dealing with some issues,” Bishop Andonios of Phasiane, who serves as the chancellor of the Greek Orthodox Archdiocese of America, told Commercial Observer, attributing the missed payments to a combination of cost overruns and the fallout from the financial scandal. “That’s part of [the reason] why we’re doing audits.”

The Port Authority of New York & New Jersey controls the land under the new site, but reached a deal in August to lease the site to the shrine for just $1 per year. The church also has the option to buy the land for $1 whenever it wants to during the term of the 198-year lease.

In September, an archdiocese representative told The New York Post that the organization planned to exercise the purchase option once construction is complete.

Representatives from the Port Authority did not respond to a request for comment.

The shrine was designed by the Switzerland-based firm of Santiago Calatrava, the architect who conceived the Oculus at the World Trade Center transit hub, just two blocks north on Greenwich Street.

The Greek Orthodox community’s history near what became the World Trade Center dates to 1919, when a group of worshipers who lacked a nearby church raised $25,000 to purchase a tavern, at 155 Cedar Street, whose dining room they had met in to pray. After converting the building into a chapel, which they named after the fourth-century bishop Saint Nicholas, the congregation started holding services in earnest there in 1925. Beginning in 1966, construction on the World Trade Center placed St. Nicholas, on what is now the southeast corner of Liberty Street and the West Side Highway, directly adjacent to the South Tower, at 2 World Trade Center.

Although the episcopal Trinity Church Wall Street—whose St. Paul’s Chapel was constructed in the 18th century—was famously spared from structural damage after the terror attacks on Sept. 11, 2001, the community of Greek Orthodox worshipers in Lower Manhattan was less fortunate.

When United Airlines Flight 175 flew into the southern facade of the South Tower around 9 a.m., debris rained down on the modest four-story church building, which was only 22 feet wide and surrounded on three sides by a parking lot for the business complex. A congregant told The Wall Street Journal in 2001 that he saw human remains and an airplane’s wheel scattered around the building as he fled the church during the crisis. When the South Tower collapsed just after 10 a.m., the church was instantly destroyed, the only building apart from the World Trade Center complex to fall immediately after the attack.

In the following days, Demetrios visited the Ground Zero site to examine the religious relics from the old St. Nicholas that recovery workers had unearthed as they began to clear debris. So few artifacts from the church could be salvaged, The New York Times reported, that they were stored in a pair of suitcases.

“[St. Nicholas] is in a state of transition but not eclipse,” he said at the time.

The current size of the Greek Orthodox community in New York City is difficult to estimate, Andonios said. At the diocese’s largest New York City church in Flushing, Queens—also called St. Nicholas—typical weekend services draw about 2,000 worshipers. But their ranks swell to nearly 10,000 on important religious holidays, according to the bishop.

At the end of last week, both the Greek Orthodox Church and Skanska USA sounded optimistic notes about the project’s future.

“We regret that stopping work was the only viable option at this point in time,” Tom Webb, Skanska’s executive vice president, said in a statement. “We are confident that they will find the funding to complete this work at some point in the future.”

Andonios, for his part, said he hoped the church could draw on promised donations to get the project back on track.

“We have to date $48 million or $49 million in [pledged donations], but only $37 million have been fulfilled,” he said. “Based on that and some other steps, we’re comfortable that we can move forward again.

“We have a good relationship with Skanska,” he added. “It was a difficult decision, but they understand.”

While construction on the main structure is suspended, work will continue offsite on fabricating skylight panels intended for the shrine’s dome, and the curtain walls of marble and glass, the archdiocese said in a statement. The statement did not specify how that work will be funded.

Last Thursday afternoon, the construction site was quiet. Two blue cherry pickers sat collapsed and dormant alongside the building atop the elevated Liberty Park plaza, and any cranes had departed the scene.

Two women visiting from Texas, who declined to give their names, initially mistook the project for a mosque, perhaps conflating it with Park51, the Islamic community center project that created controversy in 2010 as politicians debated the merits of a “Ground Zero mosque.”

White tarps, covering construction materials on the shrine’s incomplete roof and facades, fluttered in the wind, disclosing gaps in the structure that remained exposed to the elements. At around 1:30 p.m., three workers appeared at the site, entered the unfinished sanctuary and shut the door behind them.