After rebounding from bankruptcy, retail REIT considering $14.8B offer that could change its course 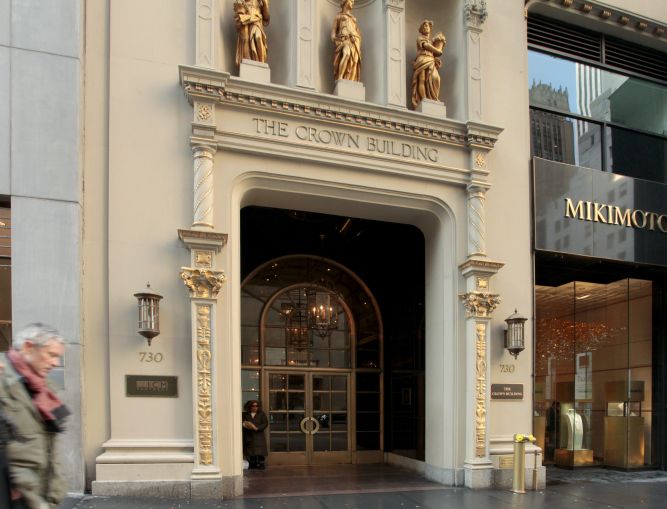 GGP teamed with Jeff Sutton to acquire the Crown Building, at 730 Fifth Avenue, for nearly $1.8 billion in 2015. Photo: CoStar Group

When Brookfield Property Partners lodged a $14.8 billion takeover bid for GGP last month, it raised the possibility of one of the biggest real estate mergers and acquisitions seen in recent years—one that would create a massive company with nearly $100 billion in assets globally and annual net operating income of roughly $5 billion, Brookfield said in announcing the bid.

It also marked the latest chapter in the tumultuous history of the Chicago-based real estate investment trust formerly known as General Growth Properties. The past decade, in particular, saw GGP emerge from the wreckage of one of the biggest real estate bankruptcies in history in 2009—when it was unable to refinance more than $27 billion of debt in the wake of the financial crisis—to re-establish itself as one of the nation’s major players in the Class A mall space, with assets ranging from prestigious shopping centers in Honolulu and Southern California to high-street storefronts on Fifth Avenue.

GGP’s renaissance has come under the guidance of Sandeep Mathrani, who left his role as head of Vornado Realty Trust’s retail division to become the REIT’s chief executive officer in 2010, when the company was just getting back on its feet after the bankruptcy. With the help of investment from the likes of Brookfield and hedge fund investor Bill Ackman’s Pershing Square Capital Management, GGP shed dozens of properties, rid itself of burdensome holdings by spinning off Rouse Properties and the Howard Hughes Corporation into standalone companies and exiled to the past the legacy of the Bucksbaum family—which founded General Growth Properties in the 1950s but also oversaw its descent into financial ruin. Today, GGP has regained its status as one of the largest publicly traded owners and operators of retail properties in the U.S., with a portfolio of more than 120 properties spanning roughly 123 million square feet.

Yet, the Brookfield takeover proposal comes at a significant juncture for both the company and the market in which it specializes. The challenges facing the brick-and-mortar retail sector today have been well documented, with the Amazon-fueled rise of e-commerce having contributed to store closures at a rate unseen since the Great Recession.

Though GGP’s profile as an owner of high-quality, Class A malls has insulated it somewhat from headwinds that have most heavily impacted Class B and Class C malls and shopping centers throughout the country, the company has not been altogether immune from the great retail apocalypse of 2017. The struggles of department stores like Sears, Macy’s and J.C. Penney, which historically were counted on as mall anchor tenants capable of driving customer traffic, have prompted GGP to spend more than $2 billion to redevelop roughly 9 million square feet of space across its portfolio—mostly “anchor boxes” formerly occupied by such department stores that it has sought to reposition into restaurants, cinemas and other uses more relevant to the current retail market climate.

Like fellow Class A mall REITs Simon Property Group, Macerich and Taubman Centers, GGP has seen its stock price undertake a slow and steady slide over the last 12 months as investors have increasingly subscribed to the doom-and-gloom narrative surrounding the retail sector. Market conditions have meant that GGP (also like its peers) has found itself consistently trading at a discount to its actual net asset value (NAV); by Nov. 6, the day before news broke of the Brookfield takeover talks, GGP’s share price had fallen to $19.01, down from its 52-week high of $26.63 and well below the company’s consensus NAV of more than $28 per share (analysts who spoke to Commercial Observer for this story pegged GGP’s NAV at anywhere from $26 per share to $35 per share).

Brookfield’s initial bid for GGP, meanwhile, came in at $23 per share, or $14.8 billion in total, and took the form of a 50-50 cash-equity offer comprising $7.4 billion in cash and another $7.4 billion in Brookfield Property Partners (BPY) stock. BPY, a subsidiary of Toronto-based investment giant Brookfield Asset Management, has held a sizable stake in GGP since helping bring the company out of bankruptcy in 2010, and the deal would see it acquire the 66 percent of GGP that it does not already own. (In the third quarter of this year, Brookfield exercised stock warrants to increase its ownership interest in the REIT from 29 percent to 34 percent by purchasing 68 million GGP shares for $462 million.)

“Brookfield’s access to large-scale capital and deep operating expertise across multiple sectors, combined with GGP’s high-quality retail asset base, will allow us to maximize the value of these irreplaceable assets,” Brookfield Property Partners CEO Brian Kingston said in a statement announcing the bid.

Brookfield noted that its takeover offer constituted a 21 percent premium on GGP’s “unaffected closing share price” of $19.01 on Nov. 6, as news of the proposal immediately pushed GGP stock to north of $22 per share the next day and above $24 per share on Nov. 13, when Brookfield officially announced its offer. In the wake of the bid, GGP said it had formed a “special committee” of independent directors—excluding Mathrani and directors affiliated with Brookfield, such as Kingston, BPY Chairman Ric Clark and Brookfield Asset Management CEO Bruce Flatt—to review and consider Brookfield’s proposal and “pursue the course of action that it believes is in the best interests of the company.”

Representatives for both GGP and Brookfield declined to comment for this story.

With the offer coming in well below most analysts’ valuation of GGP, many are split on whether the deal provides good value for GGP shareholders at a challenging time for the retail sector at large, or if it undervalues one of the top publicly traded commercial landlords in the country and could prove a mere starting point in negotiations between the two sides.

“I’m sure everyone would like to get a deal done; the question is, What is the price Brookfield is willing to pay?” said Alexander Goldfarb, a managing director and senior REIT analyst at Sandler O’Neill + Partners, who noted that the initial Brookfield bid “undervalues” GGP below Brookfield’s own internal net asset valuation of the company of around $30 per share.

Goldfarb and other analysts also called into question whether GGP investors would be willing to accept BPY stock as part of any deal. In a note released last month, BTIG equity research analysts James Sullivan and Ami Probandt described BPY’s stock, which has been trading between $21 to $24 per share for most of this year, as “relatively illiquid with very low average trading volume.”

“Our assumption is they’ll have to improve their offer; no one ever throws in their best offer first,” Goldfarb said. “I think Brookfield sees the real story, which is the company being undervalued by the Street.”

Anita Ogbara, a director and credit analyst at Standard & Poor’s, described the Brookfield bid as “opportunistic” at a time when there is “a lot of pressure on valuations” in the mall REIT sector. “We don’t know what the ultimate outcome is going to be, but there’s a clear sign that [Brookfield is] trying to take advantage of the discount versus the true value of [GGP’s] assets.”

While Brookfield’s first crack at a GGP takeover may have been “an underwhelming offer” for many stakeholders, Haendel St. Juste, a managing director and senior equity research analyst at Mizuho Securities USA, said that challenging conditions in the retail space could end up having outsized sway over whether a deal gets done or not. He noted that, speaking to participants at the National Association of Real Estate Investment Trusts’ annual REITworld convention last month, there is a sense that an offer of around $25 per share “would maybe carry the day.”

“People are disappointed [in the $23-per-share offer], but then again I think there’s been a resignation among folks—that maybe it’s not great on its face, but given the current dynamic, maybe it’s as good as you could hope for or expect,” St. Juste said.

Should a deal go through and Brookfield acquire GGP, it is unclear what will become of the company’s leadership and whether the likes of Mathrani will remain in some position or capacity. What appears more certain, according to analysts as well as sources with knowledge of Brookfield’s operations, is that the combined company would look to leverage Brookfield’s exposure in nonretail sectors, such as office and residential, to potentially reposition underperforming properties in the GGP portfolio.

“We are excited about the opportunity to leverage our expertise to grow, transform or reposition GGP’s shopping centers, creating long-term value in a way that would not otherwise be possible,” Kingston said in his statement announcing the bid.

While GGP has already made steps toward pursuing such repositionings—having recently announced a partnership with residential REIT AvalonBay Communities to build apartments at one of GGP’s malls in Seattle—Brookfield would likely seek to further that approach, as it did with select Rouse Properties assets in New Jersey and Vermont in the wake of its $2.8 billion acquisition of the mall landlord last year.

Mizuho’s St. Juste said the integration of a more diverse array of uses at malls and shopping centers is warranted in an environment where “there’s too much retail in the United States” and landlords are seeking new ways to drive traffic.

Sources also said that while Brookfield would almost certainly look to hold long-term onto GGP’s premier retail assets—such as the Ala Moana Center in Honolulu, Glendale Galleria in Glendale, Calif., and Tysons Galleria in Washington, D.C., suburbs—it would probably seek to offload other lower-quality properties either through outright sales or joint-venture partnerships.

It would also remain to be seen what happens to GGP’s high-street retail portfolio, a market in which former Vornado executive Mathrani upped the REIT’s exposure via the acquisition of pricey storefronts along luxury retail strips like Manhattan’s upper Fifth Avenue corridor.

Sandler O’Neill’s Goldfarb noted that GGP’s foray into the luxury street retail space was one of the few areas where Mathrani “got pushback” from investors and observers, given that the REIT entered that market “right at the peak” of New York City property values—via deals like its nearly $1.8 billion acquisition of the Crown Building at 730 Fifth Avenue, which GGP acquired alongside retail magnate Jeff Sutton of Wharton Properties.

“[Mathrani] had done [street retail] at Vornado and he saw an opportunity at GGP,” Goldfarb said. “It was just that the prices he was paying were top of the market.” While GGP has found success with its street retail assets—most notably signing luxury fashion brand Bulgari to a pricey lease to maintain its presence at the Crown Building—depressed Manhattan street retail rents could contribute to a change in approach.

Whatever direction is in store for a new Brookfield-helmed GGP, it is almost certain that a successful takeover would shake up the market as far as publicly traded retail landlords are concerned—and very well signal a time of heightened consolidation as the industry takes on virtually unprecedented headwinds.

“It’s created an M&A tailwind and brought some investors back in the space,” St. Juste said, citing how the likes of Simon, Macerich and Taubman have also seen their share prices run up in the wake of the Brookfield bid. “Next year is going to be tough from an operational perspective; without this M&A buzz, the stocks would be down. They’re not trading on fundamentals right now.”