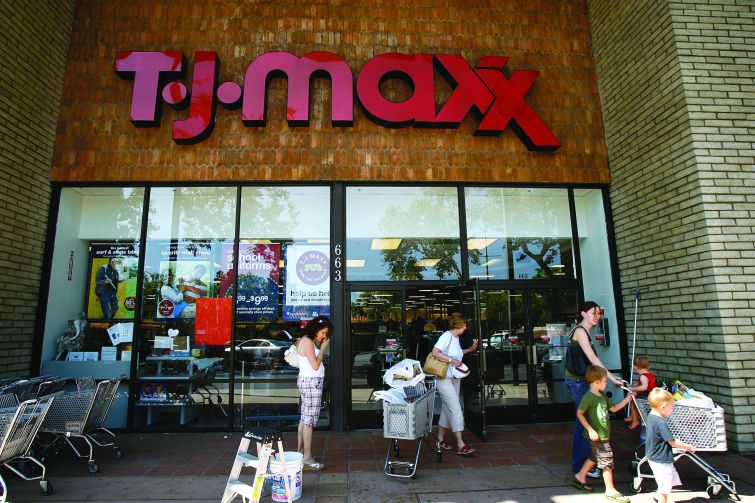 T.J. Maxx, Target and other low-priced retailers are doing well, as are those at the high-end. Photo: Getty Images

Broadway, between Grand and Broome, is one of the most expensive retail corridors in the city—and by extension the world.

Soho, that bastion of Alexander Wang, Chanel and Burberry, has no shortage of high-end fashion brands dotting the sidewalk. So who’s the new neighbor moving into 9,000 square feet at 483 Broadway in a splendid cast-iron building?

If it comes as a surprise, it shouldn’t. On the one hand, Soho isn’t what it was last year. And T.J. Maxx isn’t either but in a more positive way.

While retail continues its full brick-and-mortar meltdown, off-price retailers like T.J. Maxx, Burlington Coat Factory and Ross Dress for Less have been not only resisting the implosion but also thriving.

The secret to their success, they claim, is that they’ve cornered the market on bargain-priced fashion and home goods items that have been purchased from other retailers. T.J. Maxx’s business model, which involves training buyers to scour thousands of different vendors and stores nationwide, is still difficult and expensive to replicate online, retail experts said. Most retail watchers claim that the cost of sourcing and warehousing the diverse inventory of stores like T.J. Maxx and Marshalls is high enough that the e-commerce companies don’t pose a significant threat to their business. Plus, online shopping can’t replace the experience of bargain hunting for brand-name items in a store.

“It’s very difficult to do their model profitably online,” said Bridget Weishaar, an analyst at Morningstar. “They carry a whole lot of merchandise that turns over frequently at low price points. And when you consider the cost of free shipping, of return shipping, of photographing inventory, it creates a barrier to entry in the online space.”

So now, analysts are bullish on the performance of T.J. Maxx parent company TJX, Ross Stores and Burlington. The trio of off-price retailers is expected to see incremental sales growth, from $18 billion to $19 billion, by 2021, according to a report released by JP Morgan in September.

TJX—which also owns Marshalls, HomeGoods, Sierra Trading Post and a newly launched home decor chain called HomeSense—announced in June that it planned to open 250 new stores this year. It has already opened 240 new locations since April—bringing its global total to 3,475—and sees potential for 5,475 stores worldwide, according to data research firm eMarketer.

T.J. Maxx and its similarly fast-growing counterparts are called off-price retailers because they hawk name-brand goods at 20 to 60 percent below typical retail prices. They occupy a market-space that has become increasingly valuable as consumers have grown more budget-savvy.

The Great Recession has fundamentally reshaped buying habits in ways that benefit off-price and discount stores. Millennials, who by and large came of age in a cash-strapped and job-depleted economy, have radically different buying patterns than their consumerist boomer parents. They’re much more frugal, and they’ve grown to become the country’s largest consumer group, said Garrick Brown, a retail analyst at Cushman & Wakefield. The under-35 crowd’s bargain-hunting mentality has fueled the growth of discount retailers and hastened the decline of midpriced apparel chains (think J. Crew, Banana Republic, Gap) and department stores.

“Consumers have to think about if my pool of income isn’t growing and I still have to have a house and a car, you start consuming at these discounters because you can get more bang for your buck,” said Melissa Reagan, the head of Americas research at TH Real Estate.

“That kind of explains the hole in the middle of retail, where middle class shoppers shifted to Marshalls,” Brown said.

The off-price chains have thrived with very little online presence, which also suggests that they are relatively safe from having their market share eaten up by Amazon or Jet.com or the like. Although some have speculated that online, secondhand retailers like thredUP and Everything but the House could threaten sales at stores like T.J. Maxx, analysts say that looks unlikely.

“Those online retailers that are selling secondhand clothing—you have to deal with a lot of cost in terms of shipping,” Reagan said. “E-commerce is really expensive for retailers. So they have that additional cost that a Burlington or H&M doesn’t have. And retailers that don’t have e-commerce don’t have that extra cost. The [online consignment sites] still have to store the goods and ship them. When you average that out for the retailer, they’re probably losing money on everything they ship.”

However, the off-price versions of the high-end department stores—Saks Off Fifth, Last Call and Nordstrom Rack—may be starting to slow their own sales growth as they open dozens of new stores annually.

“In addition to concerns regarding full-price department stores, in 2018, we will be watching their off-price formats very closely,” Eric Thompson and Larry Kay of Kroll Bond Rating Agency said. Thompson and Kay reported that both Nordstrom Rack and Saks Off Fifth have reported declines in same-store sales performance [See more from Thompson and Kay on page 64].

“Off-price stores appear to be ‘over-retailed,’ prompting more competitive pricing and discounting within the sector,” Kroll analysts wrote in their October note on off-price retail.

But in general, the outlook for the off-price retailers is still excellent.

“There doesn’t appear to be an end in sight in the run-up for off-price apparel,” Brown said. “Burlington is opening 40 to 50 stores a year, and they would do 80 a year if they could find places that would give them space at the terms they demand. Nordstrom is closing department stores, but they’re opening 30 to 35 Nordstrom Racks a year.”

With reporting by Cathy Cunningham.