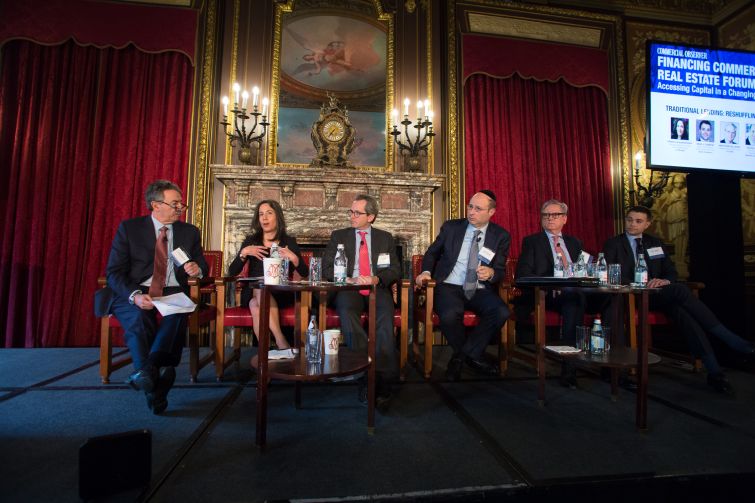 Representatives from J.P. Morgan, CIT Bank and Bank of America as well as brokerage Meridian Capital Group and development firm TF Cornerstone weighed in on various topics such as the use of subordinate financing in transactions, the use of intermediaries and the subject du jour: tax reform.

Bank of America Senior Vice President Brad Dubeck said the bank’s transaction volume has been down in 2017 compared with the last couple of years but that he’s still pleasantly surprised at the bank’s activity, 25 percent of which has been on the construction lending side. Dubeck kicked off the conversation on the use of subordinate financing by saying, “Five years ago we did more. Now, 25 percent of what we do has subordinate debt in the form of preferred equity or mezzanine financing. It doesn’t bother us.” He pointed to the quality of the sponsor behind a deal as the key deciding factor before engagement.

Matthew Galligan, president of real estate finance at CIT Bank, said, “every major deal we do has some sort of subordinate debt, including EB-5.” Galligan said the bank’s transaction volume is up 5 percent this year despite a troublesome first quarter.

J.P. Morgan’s co-head of Real Estate Banking, Priscilla Almodovar, provided a different perspective: “Very few of our deals have preferred equity or mezzanine debt. We have to pick preferred equity over mezzanine. The bigger point is, there is capital for everyone.”

When it came to utilizing brokerages, Jeremy Shell, principal of developer TF Cornerstone, said that the market is “created by intermediaries” but also said his firm tends to utilize the many direct relationships it has formed over the years.

Galligan, on the other hand, said CIT mostly works with brokerages, including Meridian and HFF.  Galligan explained that, because the capital markets can sometimes be quite complex, brokerages can help weather the storm. Dubeck weighed in, saying  that although Bank of America historically operates a direct business, it’s begun transitioning into a more balanced approach, working with brokers.

Meridian Capital’s Chairman and Chief Executive Officer Ralph Herzka responded saying, “no one can predict where [interest rates] will go. I don’t think we’re headed for disaster, but just a softening. We’re in a great city and country, and as long as nothing changes dramatically, the sector will remain strong.”