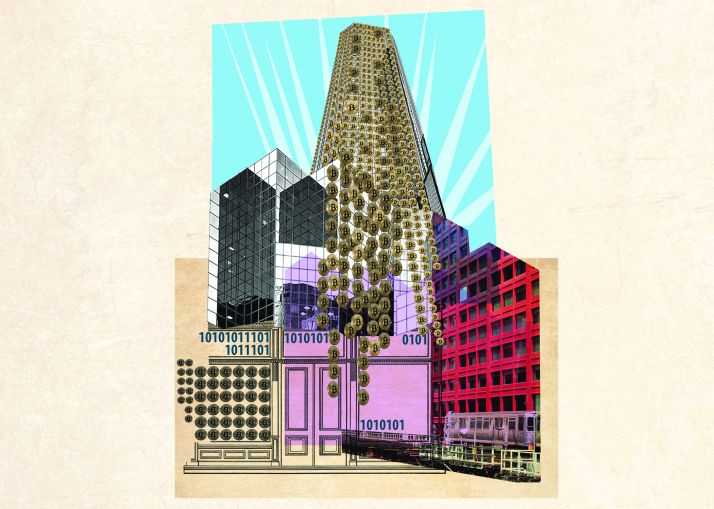 A few years ago, Alexandra Kramer was midcareer as a successful real estate and securities lawyer when her husband asked her an unexpected question:

“Have you ever thought about going back to school?”

The partner at CKR Law, an international firm with dozens of global offices, was befuddled. A graduate of Barnard College, she had already earned a law degree from the University of Pennsylvania and a master’s in real estate from New York University.

“Why would I ever need to go back to school?” she asked.

“Thanks to blockchain,” her husband told her, “we may not need lawyers anymore.”

She had never heard of blockchain, but starting that evening, she made it a point to find out about it.

Blockchain, Kramer learned, is a digital network technology that acts as a self-auditing ledger, creating an ironclad record of transactions and value.

Theorized since the early 1990s, it was given first life in 2008 as a key component of Bitcoin, a digital currency launched by an anonymous group online. Instead of backing from a government that attests to its legitimacy, the currency works by using a transparent public record to guarantee that all users will agree who owns how much of it.

To ensure that users can’t create counterfeit value or spend Bitcoin they don’t have, the network uses encryption to ensure that the chain of ownership is incorruptible.

Today, real estate professionals from brokers to bankers and lawyers to title insurers are having their own blockchain moment, increasingly attuned to the digital ledger infrastructure’s potential to reshape industry. Alerted to the technology’s promise by a plethora of hungry startups, a successful pilot program in Chicago and mainstream business headlines about Bitcoin, industry forward-thinkers are learning about blockchain’s potential with a mix of excitement and apprehension.

“We’ve had a lot of entrepreneurs who have woken up to this intersection” between blockchain and real estate, said Ragnar Lifthrasir, the chief executive officer of real-estate startup velox.RE. “There’s so much more to come.”

Lifthrasir believes that blockchain’s ability to serve as a trusted public ledger will make the technology a linchpin of tomorrow’s real estate industry.

“Right now, it’s pretty easy to fraudulently transfer real estate ownership,” the entrepreneur said. If blockchain did the job instead, “you would have to create counterfeit blockchain” to pull off a scam, he explained. “As far as we know, that’s never been done. It’s much easier to counterfeit a paper real estate document than a blockchain.”

In the years after its launch, Bitcoin, the currency that blockchain was first created to support, traced an ignominious path into the mainstream. Because the currency could be transferred online without an institutional intermediary like PayPal or American Express, criminals seized on its capabilities to buy drugs and fake identities. The largest Bitcoin-based black market, Silk Road, was shut down in 2013. Its founder was convicted on charges of computer hacking and trafficking narcotics.

But in the years since, the technology has spread outside underworld doings into mainstream use. The price of one Bitcoin—ever volatile—broke the $11,000 level this week, a whopping 30,000 percent above its highest price in 2011. Consulting firm Accenture advertises its expertise advising clients on integrating the technology, as do law firms like Covington & Burling and Baker Hostetler.

Now, real estate—that most physical of assets—may be the ethereal technology’s next frontier.

Piper Moretti, a California Realtor, first learned of Bitcoin when a client of hers demanded that she work with him to use the currency to purchase the house she’d shown him.

“It was a $3.2 million house in Manhattan Beach,” the Redondo Beach, Calif.-based agent recalled. “It was an all-cash deal, and we converted the Bitcoin into a wire sale for the seller.”

She recounted how her shock at the unusual request quickly morphed into passion for a new industry niche.

“It just kind of fell in my lap. I didn’t know anything [about Bitcoin],” Moretti explained. “Every day was something new. I was getting a lot of pushback from the seller’s agent. He thought we were trying to scam him.”

But Moretti’s experience also speaks to the hurdles that lie on the road to broader adoption. The traditional banks that her clients typically go to for mortgages, she said, have no intention of financing in cryptocurrency anytime soon. All four of the Bitcoin transactions that her firm—which she rechristened the Crypto Realty Group—has closed have been all-cash deals, she said.

Even if most homebuyers won’t likely be using the technology for decades, its inroads into behind-the-scenes real estate mechanics like title insurance and deed conveyance could be much closer to fruition.

“Intermediaries [like investment banks and title insurers] will be significantly challenged,” said Lewis Cohen, a capital markets partner at international law firm Hogan Lovells. “Once those businesses become less profitable, they can shrink much more quickly than people imagine.”

Title insurers—indemnifiers that protect against the risk that a buyer’s ownership right to a property will be challenged by past fraud or other problems with property records—may be the most vulnerable to the new technology.

To many in commercial real estate, “title insurance seems like an unnecessary cost,” Cohen said. If blockchain could be used to create a transparent record of ownership like it does for Bitcoin, he speculated, there might be a reduced need for the professionals who have guaranteed those records in the past.

“The title industry tends to be a bit of a dinosaur,” said Felice Shapiro, the chief underwriter at AmTrust Title Insurance. But even if blockchain’s role in the field is still five or 10 years away, her colleagues are beginning to pay attention.

“You see [blockchain] in the trade rags now,” Shapiro said. “It’s a hot-button kind of word.”

It wasn’t all that long ago that examining property records meant that title insurers put on their gumshoe hats and headed downtown. Until 2001, when the Big Apple introduced its automated city register information system (ACRIS), deeds were stored exclusively as they always had been, at county offices and libraries, in binders decades or centuries old.

Today, the ACRIS website makes the city’s property records available on the internet, but further afield, record searches are still an affair of file cabinets and magnifying glasses.

“We have 62 counties in New York,” Shapiro said. “You still have counties that are not on electronic recording.”

On a recent Monday afternoon at the New York County office—at the city’s Manhattan Business Center at 66 John Street—all the forlorn tools of the analog trade were still in evidence. A carousel of dozens of ink-and-paper maps stood ready to help perusers track down block and lot numbers. Rows of microfiche machines collected dust. And countless stacks of large-format binders enclosed printed property records tracking parcels of land back to the 17th century.

A pilot program that Lifthrasir’s startup conducted in Chicago this year aimed to prove how easily that apparatus could be brought into the 21st century. Teaming up with real estate lawyers and local government offices, his firm coordinated the exchange of a property deed conducted purely via blockchain—a transaction that the Cook County, Ill., Recorder of Deeds Office recognized as acceptable.

“We tested our software and showed it worked,” Lifthrasir said. “We proved that you can do a conveyance on blockchain.”

Proponents of the technology are optimistic that it could soon fill an even wider variety of roles.

“In CMBS financing, all of the lender documents and information about the particular loan could go onto the blockchain and allow certain investors to get access to it or not through a permissions area,” said Lee Samuelson, a colleague of Cohen’s at Hogan Lovells. “The notes and pieces of the loan that will be traded could be put onto the blockchain. That can happen in the very near term.”

Investment banks, for their part, have expressed a mixed view on the technology.

Jamie Dimon, the chief executive officer of J.P. Morgan Chase, lit into Bitcoin in September, describing it as a financially dangerous craze “worse than tulip bulbs.” (During the Dutch golden age of the 17th century, the price of tulip bulbs briefly soared to astronomical levels before crashing abruptly as the nation experienced a craze for the newly introduced flower.)

“It won’t end well. Someone is going to get killed,” Dimon said at the time, adding that he would fire any traders who he found were transacting in the currency.
Take it as a sign of the sheer pace of the technology’s growth, however, that Dimon is already eating his words.

Just two months later—in a sign of how fast feelings about the technology are shifting—J.P. Morgan is changing its tune. Bloomberg reported last week that the company is now exploring the possibility of helping customers trade in Bitcoin futures contracts. (Dimon has not yet addressed in public why he changed his mind, and J.P. Morgan did not return a request for comment.)

Moves like that could be just the trigger that the real estate industry is watching for as it ponders broader adoption.

“I think certain investors…are looking to see if one of these big players is involved,” Kramer said. “That lends to [blockchain] a sense of legitimacy.”