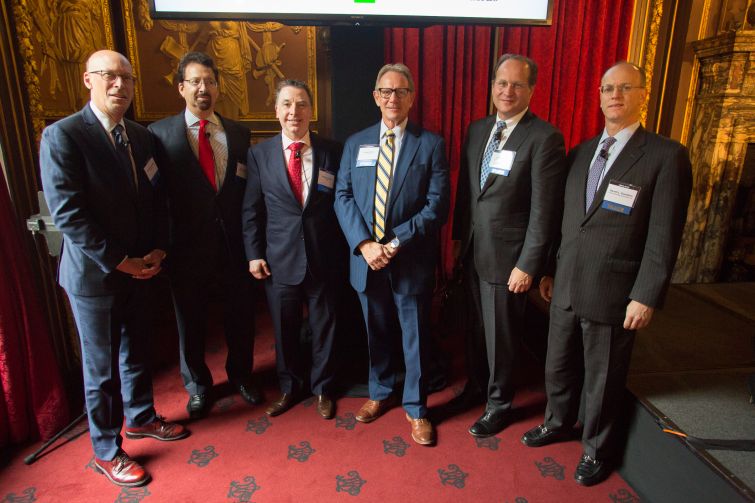 Industry heavy-hitters from Santander, TD Bank, PGIM Real Estate Finance (the investment arm of Prudential), Natixis and Deutsche Bank kicked off the event with a wide-ranging discussion that covered where each is most active in the U.S. and abroad, where they see capital activity across the globe, the pitfalls of strict regulation (both in Europe and in the U.S.) and how they’re competing with alternative lenders.

Despite that the U.S. brimming with capital—both foreign and domestic—a new Federal Reserve chair appointment and uncertainty on where the U.S. economy is headed, David Durning, the president and chief executive officer of PGIM, explained that, “the stability and liquidity of the U.S. market is huge. Interest rates in the U.S. are attractive on an overall basis and borrowers are looking at debt as a defensive play.”

Although the search for yield is driving market participants right now, “people are still mindful of the last cycle,” Durning said. “They want to sleep well but are eating less well as they are getting less return for risk.”

Every panelist but Durning indicted their respective institutions have been engaging in construction lending despite the current challenging environment for construction in major U.S. gateway cities where these banks mostly operate.

“We’re comfortable in construction lending where we get a good spread,” Gerken said. “On term loans we can do five to seven years without having to reach into the space to compete with funds.”

On the topic of regulation, each panelist voiced some frustration over strict monetary and time commitments required to deploy capital. Panelists echoed each other in saying that the current regulatory environment creates an unnecessary hurdle that stifles their ability to compete with alternative lenders that don’t fall under the same regulatory restrictions.

“It’s really a tax on the process, with the vetting that’s required,” said Greg Murphy, the head of real estate finance in the Americas at Natixis. “It’s more expensive, and it takes longer. Debt funds can move faster. We can’t do that on every deal.

Durning weighed in, adding that although the regulatory environment is tough, it’s still more lenient than that of Europe, which has in turn made “folks more interested in bringing debt to the U.S.”

When asked to opine on any looming black swans, Gunther-Mohr said he’ll be keeping an eye on “the growth of non-regulated capital sources. We’re not in crisis-mode yet, but it’s definitely something to watch.”

Murphy perhaps spoke for the masses in simply quipping, “I’d rather be a freed-up traditional lender.”