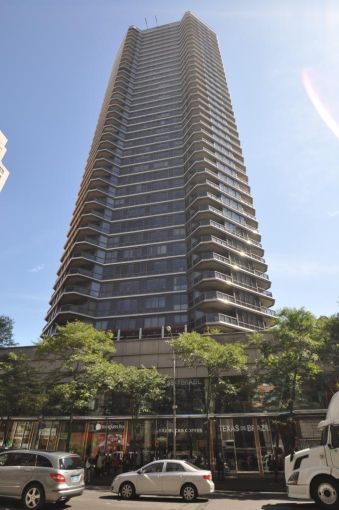 A new Mediterranean restaurant and lounge has reportedly agreed to take more than 14,000 square feet of space at 1011 Third Avenue on the Upper East Side.

Zavõ Restaurant & Lounge signed a 15-year lease at the Savoy Shops on the northeast corner of East 60th Street, The New York Post reported this week. The restaurant is taking 14,180 square feet on the ground and second floors, plus an undisclosed amount of lower-level storage space, at the two-story, roughly 46,000-square-foot retail building located at the base of The Savoy—a 43-story luxury condominium building at 200 East 61st Street developed by Olshan Properties in 1986.

Olshan owns the retail space at 1011 Third Avenue and was asking $1.3 million in annual rent for the space, which was previously occupied by Brazilian-American steakhouse chain Texas de Brazil, according to the Post. Josh Birns, Olshan’s director of leasing, represented the landlord in-house, while John Bremont of Home2Office Realty Services represented the tenant.

In a statement, Birns said the property’s “prime” location makes it “immediately accessible to New Yorkers who are always on the hunt for the next great restaurant and spacious event location.” Bremont confirmed the transaction but did not immediately provide additional comment.

Zavõ is expected to open by early December at the location, which will house an eatery offering Mediterranean cuisine on the ground level and a larger second-floor space that will be mostly used for private parties and events, the Post reported. Proprietor Ilya Zavolunov also owns the Da Mikelle chain of kosher restaurants, catering halls and events spaces located throughout Queens.

Update: This story has been updated to include a statement from landlord broker Josh Birns of Olshan Properties and input from tenant broker John Bremont of Home2Office Realty Services.