I H8 NY: NYC Is Crowded, so Lots of Shrewd Money Is Looking Elsewhere 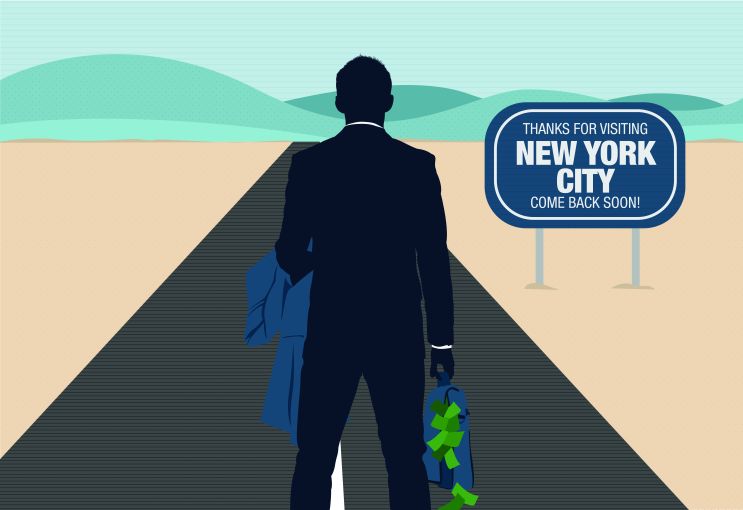 New York City is overflowing with capital—both foreign and domestic—with lenders chomping at the bit to throw debt at the right kind of deal while others are finding their backyards to be quite crowded.

In 2016, New York topped the list of cities that attracted the most foreign capital in 2016: $16.3 billion, according to Knight Frank’s 2017 Active Capital report. Despite regulatory restrictions, Chinese deal volumes hit a record high of $19.2 billion in 2016, up 10 percent from $17.3 billion a year earlier, according to a report from brokerage Cushman & Wakefield.

“We still like New York,” said Gamma Real Estate President Jonathan Kalikow. “We don’t think it’s going away obviously, but because it’s such an investable market for foreigners, the opportunities are so difficult to find.”

Competition for U.S real estate lending opportunities is rife, and it’s strong. But in New York, it may be overheating. An exasperated source recently told CO that there were 35 bids for a $130 million bridge loan in New York City recently (“an absurd amount of competition for a loan that size,” the source grumbled)—he declined to name the property.

“You could say New York is totally overheated, but we’re busy here because we’ll come into projects at a low basis and be fine. So, I think it’s core, gateway cities that are more fully valued,” said Jeff Fastov, a senior managing director at Square Mile Capital Management.

According to JLL Capital Markets Managing Director Aaron Appel, “There’s a tremendous amount of debt capital out there. There’s been a slowdown in the equities market and there’s still a disconnect where buyers are willing to buy real estate versus where sellers are willing to sell. There’s also been some pretty aggressive foreign capital that’s made some purchases [in New York], but it seems to be that that foreign capital market is slowing a bit as the domestic players aren’t willing to pay those prices.”

Outside of the Big Apple, prominent alternative lenders such as Square Mile, ACORE Capital, Mesa West Capital and Gamma have found their competition in regional submarkets to be thinner than in New York—but still quite active. According to Knight Frank’s research report, foreign capital continues to target multifamily housing in the secondary markets of Atlanta, Charlotte, N.C., and Phoenix, and in the past 12 months, more than three-quarters of international investment has gone to U.S. secondary and tertiary markets.

To add to that, a recent survey report of institutional investors conducted by Cornell University’s Baker Program in Real Estate and Hodes Weill & Associates, a global real estate advisory firm, found that investor’s target allocations to real estate has averaged 10.1 percent so far this year, up from 9.9 percent in 2016. Survey respondents indicated that the number will likely rise to 10.3 percent in 2018. Public pension plans have remained mostly flat in their allocations while private pension plans, insurance companies and sovereign wealth funds have increased theirs, the survey found.

“The national lending market today is materially more competitive than a year ago and even two years ago, so it’s been very robust,” said Boyd Fellows, a managing partner at ACORE Capital. “Bottom line is, there’s a lot of competition, and there’s plenty of capital available in the market.”

And size matters, at least to some. The larger, one-stop-shop alternative lenders are beating out competitors in the domestic lending arena, enticing borrowers with a streamlined, intimate approach to deploying capital. This approach is lost on traditional banks that are forced to lend more conservatively and are handcuffed by industry regulations, or on smaller lenders or funds that don’t have the human capital or asset management experience of a larger, fully integrated shop, sources said.

“People tend to find us when their backs are against the wall or they’re under a time crunch and they know they need to close,” Kalikow said. “There are a bunch of relatively newer lenders who might quote tight rates to buy business because they’re not known. We’ve seen a bunch of instances of late where those people failed to close and borrowers come to us in a panic in the 11th hour seeing if we can help.”

In January, Gamma provided a short-term bridge loan of roughly $83 million to help finance a 175-acre development site in Frisco, Texas, called Wade Park. The project is expected to house roughly 600,000 square feet of retail space, two luxury hotels, around 6 million square feet of commercial office space and 1,300 residential units, ranging from apartments, condominiums and single-family homes, according to Dallas News. The project is expected to open its first phase in spring 2018.

“Usually [what makes newer lenders uncomfortable] is going to be the financial strength or experience of the borrower and sometimes it could be the amount of equity in the deal,” Kalikow said. “We underwrite the borrower to the extent that there is no fraud or misdeeds occurring, but we look to the value of the property to cover our loans. Some of these folks don’t have as strong a sense of the property and, therefore, need more checklist items than we would.”

The only hope for some smaller lenders to compete is to simply take on more risk.

“The only way they’ll win business is they’ll have to offer better terms: more leverage, lower pricing,” Fastov said. “If they can’t move with the speed and accuracy of a local footprint, then they’ll have to take on risk in another way otherwise why would the market respond to them…Someone who looks like us is going to be competitive.”

Square Mile boasts eight regional offices across the country and has been playing heavily on the West Coast—California, in particular—with a focus on value-add opportunities. It’s different than many full-service lending shops in that it hasn’t necessarily soured on construction lending or on specialized industries and asset classes such as senior housing.

“In particular, we do a lot of construction and value-add lending, so we make a loan and keep advancing through a project so it’s very important that the borrower or partner has confidence that we’ll be a good capital partner from not just day one but through the life of the project,” Fastov said. “Borrowers know if you’re competent or not and if you know the market and their project, and they want to pick someone who is going to keep up with them.”

Southeastern states accounted for the largest share of capital deployed in 2016, according to the Knight Frank report. Foreign capital has continued to target multifamily opportunities in secondary markets. Over 370,000 multi housing units are expected to be delivered into U.S. markets in 2017, the report said.

Where some major gateway cities such as New York and San Francisco have suffered from unfavorable pricing and overbuilding, other submarkets, like areas in the South, have started to realize the benefits from recent employment growth and demographic shifts, which has created a solid backdrop for demand.

“There’s been job growth in Atlanta that’s been strong, so those submarkets continue to develop and opportunities present themselves out of that,” said Raphael Fishbach, who is a principal on Mesa West’s originations team and heads up the firm’s East Coast originations platform. “The deals we’ve done there have all performed as expected or better than expected. We’ve been there for a number of years, and I think we’ll see more people going there because they’re getting shut out of doing deals in New York.”

Kalikow sees a gold mine in the Southeast, particularly in Atlanta, Charlotte, N.C., Nashville, Tenn., and even smaller parts of Texas, near Dallas. His father, Gamma Chief Executive Officer and Chairman N. Richard Kalikow, attended the Georgia Institute of Technology in Atlanta, so the firm has monitored the region’s heartbeat for nearly 60 years. There’s really nowhere Gamma won’t go, if it makes sense; they’ve made loans in Minot, N.D., St. Paul, Minn., Fort Mill, S.C., Asheville, N.C., Midland, Texas, and parts of Hawaii. The firm has also considered lending in Alaska.

“We like the Southeast because of the demographic growth down there and because of the environment for economic expansion as well as corporate America’s presence,” Kalikow said. “They’re talking about this Trump tax change where you won’t be able to net state and local tax against federal; that would be devastating for New York, New Jersey and Connecticut for example. It would only continue to help the Southeast. The Southeastern United States should be sending the northeast a thank you letter.”