Dumbo Is Finally Getting a Full-Sized Supermarket 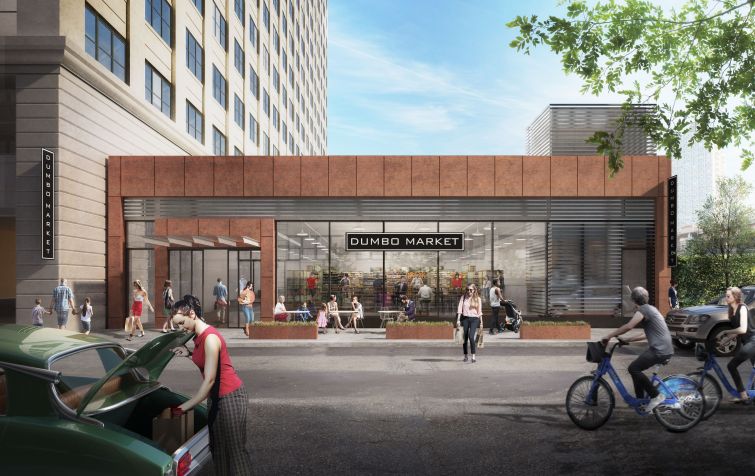 A parking garage at 66 Front Street is about to become the first full-service supermarket in Dumbo, Brooklyn.

Landlord Two Trees Management leased the site between Washington and Main Streets to Dumbo Market, according to a press release from Two Trees. The current parking garage will be converted to a 16,000-square-foot grocery store that offers a full deli, a butcher and seafood department, a bakery, fresh produce and fresh-cut flowers. The family behind Williamsburg’s Brooklyn Harvest Market will operate the store.

The lease is for 20 years, but a spokeswoman for Two Trees declined to give the asking rent. The store is currently under construction and expected to open in early 2018.

“Supermarkets are often anchors for communities, and Dumbo Market will be an incredible amenity for the thousands of residents and office workers in our vibrant mixed-use neighborhood,” Jed Walentas, the chief executive officer of Two Trees Management Company, said in prepared remarks.

Jason Gerbsman of HUDSON represented Dumbo Market in the transaction, and Bonnie Campbell handled the deal for Two Trees in-house.

“I am proud to be a part of such a monumental deal and have the opportunity to bring a true amenity to DUMBO, its residents, patrons, and local daytime crowd,” Gerbsman said in the press release. “This is no doubt going to be one of the most exciting gourmet specialty stores in all of New York City.  I have been working with Two Trees for over a decade and they are true professionals and an absolute pleasure to work with.”