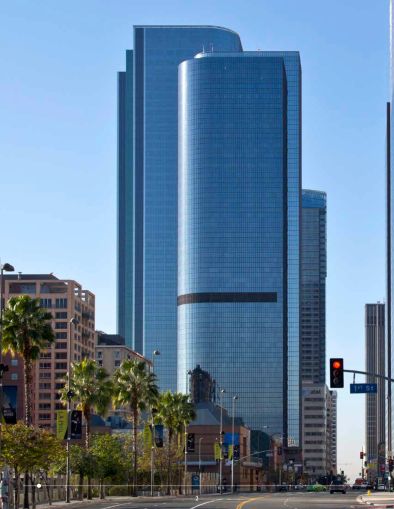 Rising Realty Partners and Colony Northstar nabbed a $300 million loan from Credit Suisse in their acquisition of Downtown L.A. office skyscraper One California Plaza, according to a presale report from Standard & Poor’s.

The seven-year loan was originated by Column Financial— Credit Suisse’s lending subsidiary—and has a fixed interest rate of 3.83 percent. It pays off an existing $288 million bridge loan on the property and returns $7.3 million in equity to the sponsor, according to the S&P report.

The loan is being securitized in a single asset CMBS deal, CSMC 2017-CALI. The trust collateral comprises a $250 million slice of the $300 million whole loan, securitized by the borrower’s fee interest in the office tower. The $250 million included in the securitization comprises an $86 million senior A-1 note and a $164 million junior note.

One California Plaza is a 42-story, 1.1-million-square-foot office building at 300 South Grand Avenue in L.A.’s Bunker Hill district and is part of a larger mixed-use development that includes an adjacent office property, a hotel property and an outdoor plaza. The property also has a lower-level retail pavilion, a five-level parking garage, an outdoor terrace and a helicopter landing pad.

The property was built in 1985 and is 84 percent leased to 34 office and retail tenants, including law firm Skadden and engineering firm AECOM, which signed a 15-year lease in March 2016.

The Real Deal reported that Rising Realty was in contract to buy the building in March, although it was unclear at the time whether the firm would have a partner in the acquisition.

According to the Los Angeles Downtown News, Beacon Capital purchased the property in early 2012 for $144.5 million. A year later,  Madison International Realty acquired a 49 percent stake for a reported $295 million.

Beacon Capital was also the prior owner of the leased fee position, after purchasing the existing ground lease from the city of L.A.for $33.4 million in November 2016.

Officials at Credit Suisse and Colony Northstar declined to comment. Officials at Rising Realty did not respond to a request for comment.