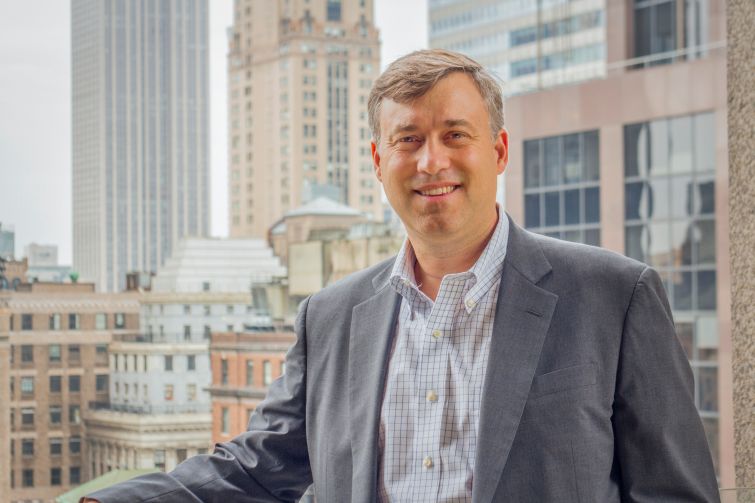 James Scott is the managing principal of CBRE Capital Advisors and heads up its investment banking in the Americas. Over the course of his career, Scott has advised public and private companies in the real estate sector on mergers and acquisitions (M&A) valued at more than $100 billion and has raised in excess of $30 billion in capital on behalf of clients. Philadelphia-born Scott started out as a lawyer at Ropes & Gray before transitioning into M&A banking and real estate investment banking. After eight years at Merrill Lynch, Scott joined CBRE in 2013.

Commercial Observer: What first appealed to you about commercial real estate?

James Scott: It’s a very dynamic sector with both large players and small players. As we [at CBRE] interact with it, we see that it’s global and it touches most other sectors. It’s really the groundwork for the broader economy in many ways.

Describe your role at CBRE.

I joined CBRE to help build a platform to pursue large and structured opportunities and also to lead investment banking in the Americas. We’re 15 bankers, primarily based here in New York but also in California. We’re very closely coordinated globally with [CBRE’s] Capital Advisor teams in Europe, Asia and Latin and South America.

What’s a typical transaction for you, if there is such a thing?

Our activity is really across a spectrum. There’s entity and portfolio M&A at one end of the spectrum with fund placement at the other end and joint ventures and recapitalizations in the middle. That looks like a pyramid to us with most of our activity organized around joint ventures and recapitalizations at the moment. But, we’re active across the entire spectrum.

How has your business evolved over the past five years?

There’s much more integration with [CBRE’s] overall platform. When we’re involved in M&A activities we partner with our investment sales peers or debt and structured finance peers to bring in world-class real estate knowledge and use that knowledge in our process to achieve best results for the client. There’s also been a broadening of business lines. We have continued as an independent adviser—both public and private—with an emphasis on working large portfolios, and in that regard, we’ve done over $8 billion in M&A since I’ve been here. We also moved wholeheartedly into equity placement—so, fund formation, joint ventures and recapitalizations—and we’ve expanded the team significantly to do that.

Are you seeing an increase in joint venturing activity?

Yes. There is a tremendous amount of capital moving towards real estate. Capital is allocating away from fixed income into alternatives and within alternatives to real estate. Capital is coming to the United States as a relatively safe haven offering a good risk return formula, and that capital has become more sophisticated and interested in partnering on a direct basis with sponsors as well as giving money to funds. So, direct investing has driven much more activity on the joint venture side.

Is it predominantly domestic or foreign capital that’s partnering with sponsors?

It’s both North American and international, but the foreign capital has increased dramatically over the last five to seven years post-crisis. It’s both broader and deeper than it ever was before, and there’s no regional of the globe that isn’t active. One of our competitive advantages is having a fully built-out global platform.

How has portfolio sales transaction volume been this year?

We’ve seen a pick-up in larger transaction activity after a slowdown in 2016. We’ve been active in all sectors, but I’d say that multifamily and industrial have led the pack in terms of portfolio activity. We’ve done well with those [at CBRE].

What are your views on the retail sector?

It’s a little dangerous to paint [retail] with a broad brush. We’re working closely with a very high-quality grocery-anchored platform, and I continue to believe that grocers are a relative safe haven within the retail space. There’s no question that other sectors and subsections within retail are under pressure from commerce trends, and that will certainly play itself out. That said, I think there’s an opportunity to reposition assets. Given our expertise in development and redevelopment, I think and hope that CBRE will be in the middle of that repositioning.

How does 2017’s M&A activity compare with previous years?

I think there’s a continuing stream of M&A activity not inconsistent with what we’ve seen in real estate over past decades. There have always been certain inhibitors to M&A activity in the public markets and in the REIT sectors. That said, we continue to see transactions happen. What we’re not seeing is the bubble-driven go-private activity that we saw pre-crisis and that’s probably a good thing. And we’ve seen a debt market that’s been much more disciplined this time around than last.

I think there’s no question it’s partly regulation, which has impacted the bank market and the securitization market. Then I think it’s also lessons learned, not only by the lending community but also by the real estate community. You’ve seen, at a high level, relatively disciplined development activity—but obviously that’s geography and sector-specific.

We have a sizable pipeline of transactions and working to get those deals closed. We hope the market remains conducive to that in 2018, but there certainly are headlines that we are keeping an eye on.