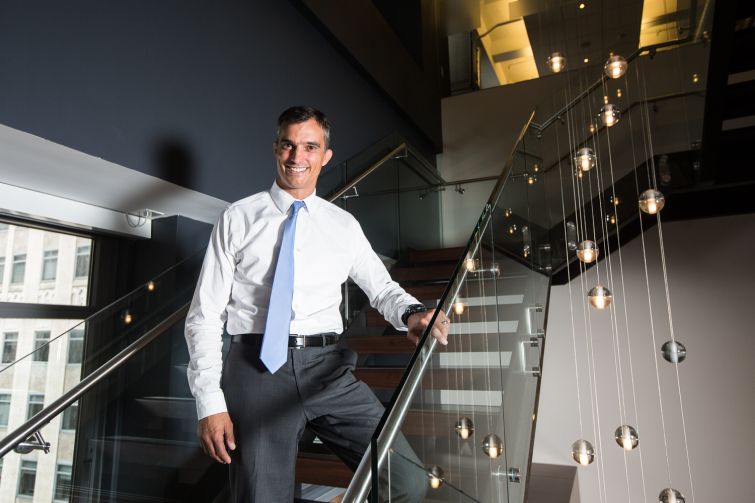 Engineering firm Thornton Tomasetti builds many of the Unites States’ embassies around the world.

These are complicated tasks, as the company has to meet the building codes of both the U.S. and the host country, and it is not uncommon for the methods of the U.S. team to clash with those of the host.

“We did a small project in Gambia, on the western coast of Africa, for the State Department, protecting some of their facilities. And we designed a small building,” said Peter DiMaggio, the firm’s senior principal and protective design practice leader, who has been involved in designing around 70 or 80 U.S. embassies.

“One of the main ingredients in concrete is stone,” DiMaggio said of the project he worked on in 1999. “So we wrote stone [in the specs], and I got a call from the local engineer, and he said, ‘We don’t use stone. We don’t have any real stone. We use seashells.’ How am I supposed to deal with this? I’m a young engineer, and I have to take this to the partner and tell him we’re going to design concrete using seashells. This is the great thing about working in some of these places—you have to solve problems.”

This is just one of the countless challenges DiMaggio has met in his career of ensuring that important buildings are built to be as safe as possible. DiMaggio, 47, is an expert in the field of protective building design, hardening structures from 1 World Trade Center to U.S. embassies, ensuring that damage will be minimized in the event of a potential explosion or other type of terrorist attack.

When DiMaggio—who lives in Chatham, N.J., with his wife of 20 years, Nicole, and their three sons, Nicholas, 16, Michael, 14, and Luke, 11—was around 11 or 12, growing up in Leonia, N.J., he would pedal his bicycle over the George Washington Bridge and ride around Manhattan, marveling at the magnificence of the sort of buildings he didn’t see in his home state. (And to answer what everyone is thinking: No, he’s not related to joltin’ Joe DiMaggio.)

Those clandestine rides—made without his parents’ knowledge—sowed the seeds of a love for structures that would come to define his career.

“I’d ride around New York City and get home in time for dinner, and nobody would be the wiser,” DiMaggio said. “When my father reads this, he’s going to get very upset.”

Although, who knows, his father might have understood. “From a very early age, I was exposed to the built environment [through my father],” he said. “He was a professor of civil and structural engineering at Columbia [University]. He taught plates and shells, nonlinear vibrations and engineering dynamics. I had to take his classes to get my master’s degree.” (His brother, Sam, is an engineer in the aerospace field.)

DiMaggio received two bachelor’s degrees—one in humanities, the other in civil engineering—and a master’s in structural engineering, all from Columbia. While getting his graduate degree, he took three classes with his father, Columbia engineering professor Frank DiMaggio.

“Taking graduate-level structural engineering classes with my father was an incredible experience. Although it was somewhat stressful—winter break might have been tough if I had a poor final exam performance—I was one of a very small group of people who got to truly see their father at work and have the ability to understand how incredibly talented he was. With all due respect to the outstanding group of professors I was exposed to at Columbia University, my father was by far the finest teacher I have ever met.”

As it happens, his father had done consulting for the structural engineering firm Weidlinger Associates, and the younger DiMaggio began working with them in college. That company would merge with Thornton Tomasetti in 2015, and DiMaggio has worked there his entire adult life.

“Looking back, I’d like to think I was the most qualified candidate,” he said, “but I’m sure my father’s reputation opened some doors. In return, I tried to come to work every day and make everybody realize that I did belong.”

According to DiMaggio, Weidlinger created a protective design standard for U.S. embassies at the request of the State Department after the 1984 bombing of the U.S. Embassy in Beirut, Lebanon. When DiMaggio joined the firm 10 years later, it was looking to expand this service, which is “designing buildings to resist high-explosive terrorist attacks—bomb blasts.”

In addition to more conventional structural engineering projects, DiMaggio began working on this in his first year with the company.

“Designing buildings to resist high-explosive attacks is an extremely complex engineering problem,” DiMaggio said. “We have to allow these buildings to sustain a tremendous amount of damage without collapsing.”

As he explained it, most buildings are designed to ensure they remain “static”—that they don’t break or bend. Protective design firms have a different mission. They have to design buildings so that, in the event of a blast or similar catastrophe, they can bend or sway but not completely disintegrate.

“We allow these buildings to sustain tremendous amount of damage without collapsing,” he said. “Most of our buildings have to stay elastic. If a terrorist attack occurs, we’re O.K. with a building deforming, cracking or breaking. We’ve got windows cracked but staying in the frame. So, lots of damage but not collapse.”

Where a conventional structural engineer might design a building to be able to sustain 100 or 150 m.p.h. winds, for example, protective design needs to make allowances for external blast pressure an order of magnitude greater than that.

“If your wind load is 80 pounds per square foot, you might have 80 pounds per square inch from a blast,” he said. “You could have 100 times the [pressure] on your building between wind and a blast. We do everything a structural engineer is doing, but in addition, you’ve added a 2,000-pound bomb that could go off.”

The most important consideration when designing an embassy, DiMaggio said, is ensuring the greatest possible distance between the building and the secure perimeter—the greater the distance, the less damage would be done to the building by an explosion at the perimeter. Local circumstances can make this a challenge, as DiMaggio explained about a project in a country he’s not at liberty to identify.

“We were in an urban environment and had the last site in an extremely important space in that country. We wanted a certain amount of distance from that building to the perimeter, and we simply didn’t have the room. We were too close to one of their major streets,” he said.

“So we talked about: ‘Could we close the street?’ It wasn’t politically viable,” he continued. “But we were able to get their representatives at the table with our representatives and our engineers with their engineers to create a solution. What we did in this case was—it was a three-lane road [outside the perimeter], and we took one lane back. They weren’t tremendously happy about it, but we were able to figure out a new path for the vehicles around that site. So we’re solving multiple problems at the same time.”

DiMaggio has become a master at solving the complex multitude of problems associated with projects of that sort.

“Peter brings two very important pieces of expertise, skill and ability to the table,” said Paul Schulhof, a partner at Tod Williams Billie Tsien Architects and Partners. Schulhof is currently working with DiMaggio on two U.S. Embassy projects—one in Mexico City and another he couldn’t reveal.

“The first is a very deep and sophisticated understanding of what it means to harden a building and deal with the various complexities of blast protection and all of the security associated with that. But the second thing he brings is a very broad understanding of the approach to structural design. He’s a creative thinker in figuring out how to work with us in our designs and what we need to be doing, while also satisfying the general structural requirements and blast protection at the highest level.”

“It poses a phenomenal level of complexity when you’re designing a building with this level of security,” said Bill Blanski, a vice president at HGA Architects and Engineers, discussing their work together on the FBI’s regional headquarters in Minneapolis. “Peter brought it all down to a visible, understandable and achievable level very quickly. His ability to do that was amazing. Peter’s leadership for all things structural was pivotal to these projects.”

DiMaggio’s ability has come into play in some of this country’s most sensitive projects, including 1 World Trade Center and the building that replaced the Alfred P. Murrah Federal Building in Oklahoma City, Okla., after the 1995 bombing that killed 168 people.

DiMaggio worked on both projects, and while there’s much he can’t discuss, he lets us in on his company’s general thinking for these projects.

“For the Freedom Tower [1 World Trade Center] and the Murrah building replacement, we made it such that if there were an incident, the egress paths, the stairwells, are harder and more well-protected so that people can evacuate the building,” he said. “But also, for something like the Freedom Tower, what we don’t want to happen is progressive collapse. A terrorist could bring a bomb, or a vehicular impact, or a plane, and do local damage; they could take out a column, say, on the ground floor. Well, you may not even feel that on the 70th floor. What we don’t want is when that column comes out, the rest of the building collapses into that space. To some extent, that’s what happened in the Federal Building in Oklahoma City and to the World Trade Center. We put things into both of those buildings such that they can withstand a significant amount of local damage and still stay standing after the event.”

DiMaggio was also involved in designing the bollards placed throughout Times Square. When a man drove his car along Seventh Avenue in May, killing a woman, the bollards that eventually stopped him were credited with preventing more deaths.

“The real challenge we’re facing as a protective design community is, How do you deal with large crowds in public spaces?” he said. “[The question] in and around Times Square and now in other cities and other places around New York is, How can we create an environment where pedestrians can move through a perimeter. We see these bollards everywhere. A bollard could be concrete or steel, but they’re mostly steel, they’re pipes that come out of the ground. I wouldn’t call them aesthetically pleasing, although people have tried to modify them. One of our challenges is to create things that don’t look like that but could still stop a vehicle.”

With projects of such significance taking up his time, DiMaggio amazingly also has time for a hobby. He’s a black belt in Brazilian jiu-jitsu and manages to train once or twice a week.

“I’ve been doing it for about 12 years,” he said. “You try to subdue the other individual—the translation of jiu-jitsu is ‘the gentle heart.’ So the idea is, I can either choke you unconscious or put a lock on your arm or your leg or wherever, and you’d be forced to either submit, or something bad would happen. I spar on a regular basis. It’s a wonderful way to stay in shape.”

Given the excellence he’s shown over the course of his career, it’s unsurprising that his one hobby makes him stronger. DiMaggio’s constant grace under pressure plays a key role in keeping American diplomats and others safe from harm.

“Peter’s a natural leader, and he brings that sense of leadership to how he runs his practice,” Blanski said. “There’s an underpinning philosophy of teamwork and collaboration in everything he does.”