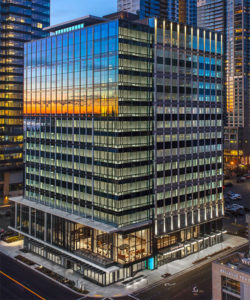 Richard Horowitz, a principal at Cooper-Horowitz, arranged the financing and Michael Magner, a managing director at Natixis, originated the 10-year interest-only CMBS loan.

Amazon moved into the building over the summer and occupies the building’s entire 350,000 square feet of office space. Bank of America and Starbucks are tenants in the 2,500-square-foot.

RFR and TriStar purchased the 356,909-square-foot building from Schnitzer West—which will continue to manage the property—for $313 million, or $877 per square foot, this week, according to an announcement. The acquisition marks the partnership’s fourth transaction, comprising over $1 billion in investment, in Seattle in the past year.

“With tech giants Amazon and Microsoft each occupying more than 10 million square feet in their Seattle-based corporate headquarters, and Facebook and Google calling Seattle home for their HQ2 campuses, we will continue to expand our Seattle footprint,” said David Edelstein, the president of Tristar Capital, in prepared remarks.

Natixis has been busy transacting across the U.S.  In addition to the $550 million refi it provided to Stellar Management and Chetrit Group for Yorkshire Towers and Lexington Towers in Manhattan’s Upper East Side this month, the French bank provided a $125 million construction loan to Madison Marquette for One Light Street, a mixed-use development in downtown Baltimore last month and a $270 million loan to refinance a J.W. Marriott hotel in Chicago in August.