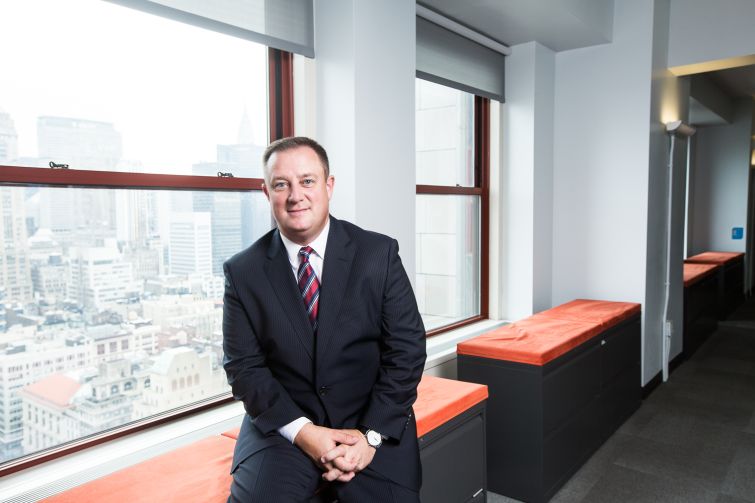 SEE ALSO: What Happens to SoHo After Rezoning?

Ward was only appointed to the position in July (he succeeded Shawn Hurley, who left Skanksa to become the president of Boston-based development firm Marcus Partners). But over the course of 15 years with the company—including stints as the division’s chief operating officer and executive vice president of its development units in Washington, D.C., and Houston—he has helped facilitate the steady expansion of Skanska’s commercial development footprint across the country.

Today, the division’s status as an integrated construction and development operation—and one whose position as part of a multinational behemoth enables it to internally finance most of its projects—has seen it pursue ambitious office and multifamily developments in its four core U.S. markets: Washington, D.C., Boston, Houston and Seattle.

In Boston, Skanska is currently at work on 121 Seaport, a 17-story, 400,000-square-foot office building rising above Boston Harbor and slated for completion in early 2018. Earlier this month, the firm announced that 121 Seaport is now fully leased after Alexion Pharmaceuticals decided that it will move its headquarters there from New Haven, Conn., next summer—joining the property’s other anchor tenant, technology provider PTC.

The 46-year-old Ward—a Washington, D.C.-area native who lives there with his wife and two dogs and works out of Skanska’s Arlington, Va., location—recently sat down with Commercial Observer at Skanska’s Empire State Building office to discuss his career to date, the benefits of the firm’s integrated business model from a development perspective and how it is seriously vetting Los Angeles as its fifth core market in the U.S.

Commercial Observer: While you’ve been with Skanska for 15 years, working in various capacities and in different markets, the firm’s commercial development business is barely a decade old. What has it been like to see that business grow firsthand?

Robert Ward: At the end of 2007, I was approached by some of our global colleagues about the potential of helping launch what would be a commercial development entity here in the U.S. We’ve had commercial development in Europe, in the Nordics, for 20-plus years, and there was a proposal to consider it in the U.S. at that point. I was one of three people that were selected from the [construction division], who also had a real estate background, to participate on a task force.

For the first half of 2008, we toured the country and went to a lot of different markets where we had a strong building presence, and evaluated the real estate markets there and our ability to enter those markets. In the middle of 2007, we presented a business plan to Sweden for us to launch in Boston, D.C. and Houston. In 2008, I was the only employee in D.C. for commercial development; we had one in Boston and one in Houston, and we slowly added to those ranks.

It was an interesting time, because as you recall, the fall of 2008 was not exactly the best time to launch a development venture. A lot of people were scratching their heads. It actually turned out to be pretty fortuitous; you never want to see that kind of economic downturn, but at the same time, it created opportunities for us to enter really high-barrier markets like Boston and D.C.

In 2009, we found what was supposed to be our first commercial development project here in the U.S., a site at the corner of 10th Street and G Street [in Northwest Washington, D.C.] It was a hole in the ground. There had been a financing issue with the previous development—it was a pretty complicated deal. We were able to meet with all the parties and find a win-win solution. We redesigned the building and started building on spec. A commercial, spec office building in Downtown Washington, D.C., in the fall of 2009 certainly raised a few eyebrows—but at the same time, it’s a great building in a great location, five blocks from the White House. The thought was, if we can’t lease this in a couple years, then maybe this is not the right business for us.

So fast-forward from there, we leased that building and sold it a couple of years later. It was a big win for the company and a very successful project, and it led to a second one in D.C. And that really led to the U.S. task force entity becoming a business unit.

What specifically appealed about D.C., Boston, Houston and, later, Seattle?

The task force team [that explored commercial development in the U.S.] had spreadsheets that could cover all the walls in this room with every possible metric you could consider. I think at the end of the day, we looked at—and at the time Houston was an exception to this, but Boston and D.C. certainly met this—places with higher barriers to entry that take a little bit longer generally to get into, but once you’re in them and can be successful in those markets, they tend to have much stronger longer-term viability.

A number of other typical economic [considerations]: demographics, job growth, the right industries driving [the economy], access to mass transit and looking at the government and municipal environments, in terms of zoning and entitlements and the ability to achieve those. We looked at a little bit of everything.

Houston at the time had some very strong fundamentals. It did not meet the high-barrier test per se; it’s a much larger area, and the zoning requirements there tend to be a bit different than Boston and D.C. for sure. But there was a thought that with the strength of the energy sector down there, that there was an opportunity to enter that market sooner than others.

Seattle was always on the list and likely would’ve been one of the first three cities; it rated very highly. I think there was just some concern about a West Coast operation from day one, when most of our folks were here on the East Coast. Since then, all four markets have performed well for us, and thankfully the diversity of the markets has been good for us, too.

San Francisco, New York, Los Angeles and Miami have been reported as markets that Skanska has considered expanding into. Is the company continuing to deliberate over such expansion plans?

We’ve looked at all of those markets. I would say that, right now, L.A. is probably one that we’re spending the most time on and, in the short term, is probably the most promising. I think in the future, any of those are possible. We have a wonderful presence here in New York, and at some point I would think New York should be on the list. It’s not a move we’re making today, but we like New York a lot.

We feel really good about L.A. right now. We’ve got a nice presence out there with our building teams and our civil construction groups, and we have some folks out there now looking at it very closely. The decision on our next market is probably coming at the end of this year, maybe the beginning of next. So a little more exploration, but it could be as soon as then that we’re ready to say.

How big of an advantage does the ability to call on Skanska’s own construction arm and internal financing model give you in pursuing and delivering your own developments?

Quite frankly, it’s a real differentiator for us. We can get really early, accurate pricing when we’re looking at sites. We’ve got [the building arm] literally side by side with us every step of the way helping to manage design. We don’t design buildings and go, “Oh boy, it’s over budget now. How do we bring it back?” We have the building folks at the table in lock step, so we design to a target budget.

We are in a couple of joint ventures, and in those cases we tend to finance more traditionally with an equity and debt structure. But, by and large, our projects are done with 100 percent of our own capital and with our own building company. It gives us flexibility, and it gives us the ability to be pretty nimble—if we see something that makes sense, we can move perhaps more quickly because we’re not waiting for funding approvals.

Skanska has been outspoken in its commitment to environmentally sustainable building practices. Does that give you an advantage over competitors?

That commitment, for us, is paramount. We’re committed at all of our projects to LEED Gold, but I think in many cases we go beyond that. I like the idea that we’re really focused on the tenants and occupant comfort and health and wellness, so we’re spending the money on systems in our buildings that bring more fresh air into the building and clean it through HEPA [high efficiency particulate air] filtration. Those are dollars we can spend and will spend; we’ve never been in a situation where we’ve said, “Geez, the project is a little more expensive than we’d like, hey let’s cut back on some of the sustainable elements.” Those become sacred.

What project of yours are you most excited about?

From an ambition standpoint, I would have to say Capitol Tower in Houston [a 780,00-square-foot office tower, which was unharmed by Hurricane Harvey]. You’re talking about a market that’s gone through some very troubling times recently, in addition to some economic uncertainty over the past couple years.

The building itself is going to be very different than anything you’ve seen in Houston. It actually sits on a full city block that has five [pedestrian] tunnel connections. If you understand the tunnel system in Houston, that’s the way a lot of people get around, especially in the summer time. It’s the only building that has five tunnel connections—in my mind, it’s almost like the Grand Central [Terminal] of the tunnel world. What our team down there has done with this design is create this open, two-volume space to bring the tunnels up to the street, and the street down to the tunnels. So here’s really an opportunity to create a destination within the city with all kinds of cool retail, near a lot of different things in town. I think that’s one that can really be a game changer for us, and we’re doing it and making decisions to commit to all of those things at a time when that’s maybe not the obvious thing to do.

The other one I’m excited about is in Seattle, at 2+U. That’s a little under 700,000 square feet, another big tower, but the views are spectacular. They’ve basically lifted the building 75 feet in the air so that they can put a park and retail—what we’re calling an “urban village”—under it. We couldn’t do those kinds of things if we didn’t have great designers and our building guys on the team with us, for sure.

Both of those projects will deliver around the second quarter of 2019, and if you visit both [when done], I honestly think you’ll be blown away. I think both markets and the communities around them will be better for those buildings, and that’s pretty exciting.