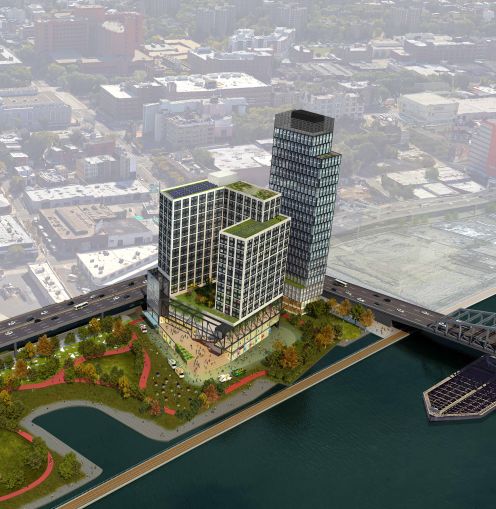 The city announced today a plan to transform a city-owned vacant site in the Bronx that sits along the Harlem River into a mixed-use development with up to 1,045 homes (at least 600 of which will be affordable), public open spaces and a home for the first-ever brick-and-mortar Universal Hip-Hop Museum.

The $300 million project, called Bronx Point, will be developed in the Lower Concourse section of the borough by L+M Development Partners and women-owned developer Type A Projects. It will also include a new movie theater (the only one in the area), educational programing space and a food hall. S9 Architecture is the architect for the development.

The vacant site at 50 East 150th Street, which is adjacent to Mill Pond Park and the Bronx Terminal Market, takes up a full block on the waterfront between East 149th and East 150th Streets. The city is in the midst of rezoning the site to pave the way for the development, and a City Council subcommittee will have a hearing on Monday, Sept. 25.

L+M and Type A Projects, which won a request for proposals for the development from New York City Economic Development Corporation (NYCEDC) in July 2016, plans to construct the housing units in two phases, the first of which will be completed in 2022 and include 600 units of affordable apartments for low- to moderate-income families. The apartments would have two or three bedrooms. It was not immediately clear when the remaining units would be completed.

“Over the last two years, NYCEDC has worked with the South Bronx community to address the area’s most pressing needs: affordable housing and waterfront access,” EDC President and Chief Executive Officer James Patchett said in prepared remarks. “This is a true community project.” (Department of Housing Preservation and Development and the Department of Parks and Recreation are also involved in the project.)

The developers plan to build a waterfront esplanade that will connect to the existing Mill Pond Park. There will be an outdoor performance space with public seating and views of Harlem River.

The food hall will be curated by Anna Castellani, who curated the DeKalb Market Hall in Brooklyn, and is the founder of supermarket chain Foragers Market.

And the education programming component of the project will be operated by various organizations including CityScience and Billion Oyster Project. Additionally, the development team is exploring a partnership with the Bronx Children’s Museum.

The development is expected to create more than 100 permanent jobs and employ 915 workers during the construction phase. And the development will be built to LEED (Leadership in Energy and Environmental Design) Gold Certification standards.

Bronx Point is a “key component” of the city’s nearly $200 million investment strategy in the South Bronx, according to today’s announcement. Mayor Bill de Blasio first announced the investment in 2015. It also includes acquiring land for a new 2.3-acre park on the Harlem River waterfront blocks away from Bronx Point, investment in sewers, a redesign of high traffic intersections and streetscape improvements.

“Bronx Point will deliver hundreds of permanently affordable housing units while establishing a destination for residents from across the borough and beyond,” Josue Sanchez, an project director at L+M, said in a prepared statement. He added that they are excited about “an in-depth dialogue with community members and other local stakeholders about design, workforce development, open space and more as we work to deliver the best possible project.”