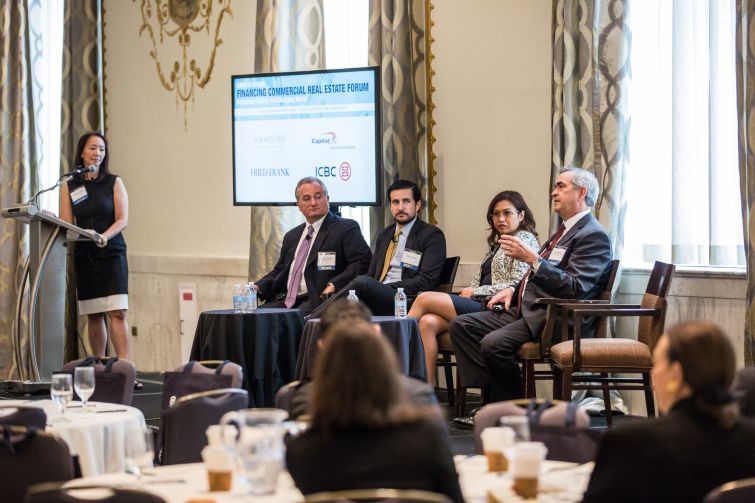 The second and final panel of the morning at Commercial Observer’s Financing Commercial Real Estate Forum in Washington, D.C., on Tuesday—titled “Global Potential: Global Banks Creating Value in U.S. Markets—featured lenders from some of the leading foreign-based investment banks with a presence in commercial property markets across the U.S.

Like their domestic banking counterparts on the day’s first panel, representatives from the likes of HSBC, Natixis, Crédit Agricole and the Industrial and Commercial Bank of China discussed how they, too, have been impacted by regulation, as well as the idiosyncrasies of doing business as a foreign financial institution with exposure in the U.S.

On the matter of regulation, Jerome Sanzo, head of real estate finance for ICBC—the world’s largest bank by total assets—noted that his institution is no different from its American competitors as far as being restricted by regulations on construction lending, in particular.

“We really have a split financial world,” Sanzo said, referring to the schism between traditional and non-traditional lenders. On certain deals, the ICBC executive said, “I say [to borrowers]: ‘Please call our [alternative lender] friends on the panel before us. They can do it; we can’t.’ ”

Sanzo noted that while Chinese regulatory restrictions on capital outflows leaving the country mean that “You’re not going to see the $2 billion acquisition of a building in Manhattan” by Chinese institutional investors anytime soon, he added that such restrictions do not affect banks like ICBC.

The panelists also discussed their banks’ preference for investment in “gateway cities” in the U.S., citing the often difficult task of explaining the fundamentals of secondary and tertiary markets in the middle of the country to their home offices.

“We have to explain a lot about the real estate,” David Perlman, a director and co-head of the floating-rate desk at Natixis, said of relaying the bank’s U.S. investment philosophy to the bosses in Paris—a sentiment echoed by Karen Ramos, managing director of loan syndications at French bank Crédit Agricole.

Even so, Perlman said that Natixis has increased its exposure to markets like Denver, citing strong fundamentals driven by a growing millennial population that has flocked to the Coloardo capital and its surrounding areas. He added that Natixis also continues to look at retail opportunities that have “the right tenant mix,” albeit not the beleaguered big-box sector.

Crédit Agricole, meanwhile, has a great deal of exposure to the hotel market—another segment of the market that has faced weakening fundamentals in recent years, amidst oversupply and competition from Airbnb. Ramos said the hotel sector constitutes 40 percent of the French bank’s portfolio in the U.S., even as lenders have increasingly avoided even core hotel markets like New York.

Perlman, however, estimated that investment in the New York hotel sector is “probably going to swing back” in the market’s favor over the next several years, as the hotel construction pipeline dries up in response to oversupply concerns and the asset class once again becomes an attractive investment.

Glenn Grimaldi, executive vice president and head of commercial real estate finance in the U.S. for British banking giant HSBC, noted that like global banks, foreign equity investors also prefer to do business through gateway markets—often partnering with locally-based, minority equity partners who bring knowledge of domestic markets to the deal and guide them through the investment. “If they’re not teaming with a local partner, they’re plunking down in a foreign environment,” Grimaldi said.

From HSBC’s perspective as a global lender operating in the U.S., Grimaldi said the bank is able to focus on specific markets, rather than taking a nationwide, catch-all approach like U.S. competitors such as Bank of America. “We don’t have to cover all of the markets they have to cover,” he said.

Grimaldi added that the HSBC’s global relationships also give it a leg up on domestic competition when it comes to developing relationships with foreign investors looking to the U.S. market. “Often, the U.S. banks can’t possible know the folks overseas that we know,” he said.