Single Family Goes Big: Institutional Interest in Standalone Homes Is on the Rise 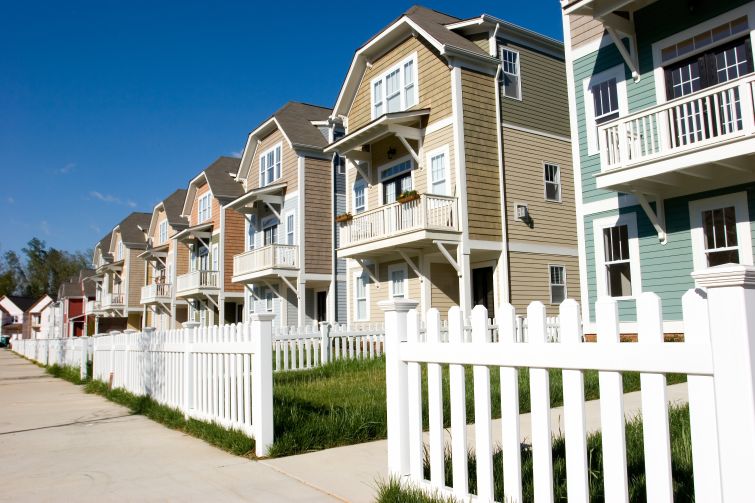 It’s not quite true to say single-family real estate investment trusts  (REITs) came about by accident, but it’s not entirely untrue, either.

In the aftermath of the 2008 financial crisis, home values decreased significantly across the country, leading to what some large institutional investors like Blackstone and Starwood Capital saw as a buying opportunity. Such entities had traditionally shied away from big investments in single-family homes, but with large portfolios of properties available at dramatic discounts, a few decided to take the plunge.

“Traditionally, [the single-family space] has been very much a mom-and-pop kind of industry, very much a cottage industry,” said David Corak, an analyst with FBR Capital who covers single-family REITs. Post-crisis, however, “a bunch of larger investors saw an opportunity to buy up homes that were 40 percent, 50 percent, 60 percent below peak valuations. They were able to do so in bulk, buying portfolios from banks or insurance portfolios, any sort of distressed portfolio, essentially. And they got great deals on them, a lot of times on the courthouse stairs.”

The plan was to buy the homes at a discount, rent them out until occupancy levels stabilized and then sell the portfolio, Corak said. “It was considered…a trade, as opposed to a long-term operating business.”

A funny thing happened, though. “Over the course of about five or six years, these portfolios have been stabilized, the revenue management systems have become a lot more efficient, and [these single-family investments] have turned into operating companies,” he said.

One of the space’s largest entities, American Homes 4 Rent, was launched in 2011 by Public Storage founder B. Wayne Hughes and went public in 2013. The REIT merged last year with American Residential Properties in a $1.3 billion deal that left American Homes 4 Rent with a portfolio of around 48,000 homes in 22 states.

Also in 2013, Starwood spun off its single-family home portfolio into the Starwood Waypoint Residential Trust REIT. In 2015, that business merged with Colony American Homes in a $7.7 billion deal to form Colony Starwood Homes, a REIT comprising 30,000-plus single-family homes in 15 U.S. markets.

In January of this year, Blackstone took its single-family portfolio public in a $1.54 billion initial public offering for its Invitation Homes REIT, which contains some 50,000 homes in 13 U.S. markets.

In addition to these three major players are a number of firms with smaller but still substantial single-family portfolios like Progress Residential, Main Street Renewal, and Silver Bay Realty Trust.

“We first viewed this sector as an accidental or unintentional sector,” said Steven Marks, the head of U.S. REITs for Fitch Ratings. “As these companies were cobbling together these portfolios, it did raise some questions as to whether or not the plan was to make this more of a trade versus more of a business.”

And a business it became. “Once a couple of these companies went public, that was an indication that the equity markets were viewing them as going concern,” he said. “That this wasn’t going to be just a temporary phenomenon and that these companies weren’t just going to liquidate their portfolios.”

One factor driving these decisions to stick with the rental business is the continuing decline of U.S. homeownership rates. Since peaking at 69.2 percent in 2004, homeownership rates have fallen steadily. In the first quarter of 2017, they were at 63.6 percent, according to numbers from the U.S. Census.

Also, institutional investors have traditionally avoided single-family homes due to the perceived challenge of managing such portfolios, said Diane Tomb, the executive director at The National Rental Home Council.

“There has always been this interest in professionalizing the single-family rental industry, much like multifamily [has been professionalized],” she said. “But the challenge is that these are dispersed assets, they’re fragmented. From an operational standpoint, how could [investors manage them]?”

A multifamily investor might own an apartment building with several hundred units on one site, allowing for streamlined management and maintenance. Managing the same number of single-family homes scattered throughout even a relatively small geographic area is inherently a less efficient process, requiring more travel, time and expense.

But now, technology has mitigated this complexity to an extent, said Rob Harper, the senior managing director and head of U.S. asset management in Blackstone’s real estate group. “There are tools that allow you to, for instance, more efficiently communicate with your tenants, manage lease processes online, use routing software and logistics technology to figure out for a repairman that has to visit 20 homes in a day the most efficient way to do that in the least amount of time. There are technologies that 10 or 15 years ago wouldn’t have existed that obviously help.”

Also important is the typically lower turnover of single-family renters compared to multifamily residents, he said. “If your tenants are staying [longer] and you don’t have to spend the time re-leasing the asset and going through that administrative process as frequently, that helps offset some of the inefficiencies that come with dealing with properties that are dispersed geographically.”

Most commonly they are looking for three-bedroom, two-bath homes between 1,500 and 2,000 square feet, he said, noting that larger and smaller homes tend to see higher levels of turnover.

“These are renters by choice rather than renters by necessity,” Corak said. “I think that’s a crucial point for the whole sector. These are people than can afford a down payment. They just choose the flexibility of renting.”

On the other hand, Marks noted the role of tighter lending standards in driving rental demand. “Our view has been, not just for the single-family for rent, but also for the traditional multifamily assets, that the biggest driver of demand has been the lack of single-family mortgage availability,” he said.

Given the role of the 2008 crash in encouraging the move of institutional investors into the single-family market, it’s only natural to ask if large investors will continue to expand into this space absent a similar event.

“Our view is that the growth trajectory of this industry is going to be much slower, mainly because the opportunity isn’t there to buy these houses at extremely attractive valuations,” Marks said. “Growth is probably going to happen more on an episodic basis as opposed to a bulk basis.

“The growth in [single-family] rents has not been to the same pace as the growth in home prices, such that your return on investment is much better if your basis is lower.”

Rahmani laid out what he described as a “base case” for the industry wherein “you have three major REITs that own maybe 200,000 homes each, and that’s really as good as it will get. And it will be sort of a niche REIT sector like self-storage.”

That said, many single-family REITs “are trading at above [net asset value],” Rahmani said, noting that this would seem to favor additional investment. “The stock market is sending the green-light signal.”

In 2016, publicly traded single-family REITs were up 26.7 percent, compared to 12 percent for the S&P 500. This came, however, after several lackluster years for single-family REITs including American Homes 4 Rent and Colony Starwood. Invitation Homes currently trades in the range of $21 to $22 per share, up from its initial public offering price of $20.

“The housing market is the biggest real estate asset class in the world,” Rahmani said. “So it’s not hard to contemplate it extending beyond [this base scenario].”

“Home builders are still only building about 800,000 single-family homes [per year], and household formation is around 1 million,” Rahmani said. “So there’s a positive demand dynamic.”

Additionally, Marks said he expects tougher mortgage standards will continue to push people into the rental market. “At this point, we don’t see that there’s going to be a material loosening of that availability, such that it will still remain the primary driver for rental demand.”

The space’s 20 or so largest investors currently own between 250,000 and 300,000 single-family homes, and Rahmani said consolidation among these firms is one route by which existing REITs might add to their portfolios.

Those holdings represent a mere drop in the bucket, though, compared to overall U.S. single-family rental housing stock, which is estimated at around 16 million units. Midsize outfits that own hundreds, as opposed to thousands or tens of thousands of properties, offer another potential way for institutional investors to expand their investments, Rahmani suggested.

For instance, some 2 million units were purchased by small investors in 2009, he said. “Those portfolios can contain up to several hundred [homes].”

A key question is whether those homes are the sort to attract an institutional investor. “Were those homes bought in a disciplined fashion and are they of a quality that they would really complement and add value to one of these portfolios?” Rahmani said. “That’s really a wild card.”

Tomb said smaller investors have begun putting together single-family portfolios with an eye towards being acquired by a REIT.

“They recognize that the institutional investors are coming into this market, and so they’re going out and buying and putting together their portfolios and positioning themselves to be bought,” she said.

One longer-term uncertainty facing single-family REITS is the question of what the true cost for maintenance will be as these properties age, Corak said.

“When you think about maintaining a single-family home, it’s more expensive than an apartment because you have four walls and a yard and probably more square footage,” he said. “You have all these ongoing maintenance expenses the company has to cover but then also actual capital expenditures that go into the property. When your HVAC blows up or your roof goes out or you need to replace floors or sod the yard, these things take a toll.”

Because the single-family business has largely been so specialized, there’s little good data on long-term operating costs for homes owned as part of institutional portfolios, Corak said. There may be unseen risks in the market segment.