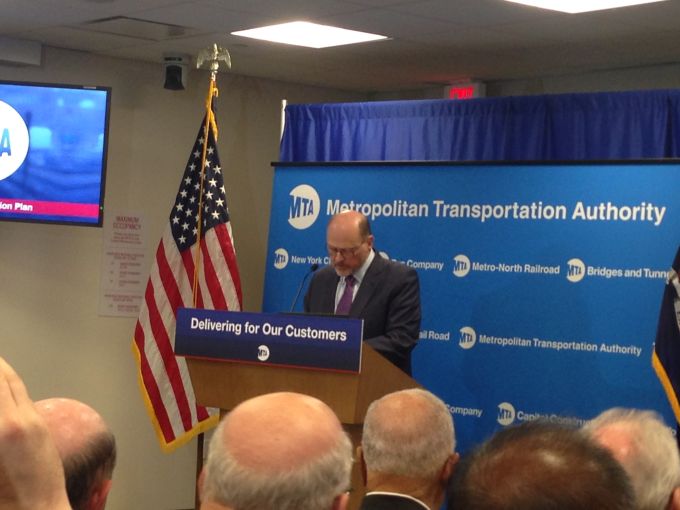 In the midst of a simmering feud between the mayor and the governor over who should fund subway maintenance, Metropolitan Transportation Authority Chairman Joseph Lhota released an $830 million plan this afternoon to reduce delays and accelerate the pace of repairs in the city’s century-old subway system.

“We are failing our customers,” Lhota said during a press conference at MTA headquarters. “Through the ‘80s and into the ‘90s, the city and the state, we weren’t properly funding the capital plan or the operating budget. We saw a rise in the amount of fares going up for all of our riders, but at the same time we didn’t see a whole lot of growth coming in from either the state or local government.”

The plan calls for fixing 1,300 of the most troubled subway signals by the end of 2018, providing more frequent cleaning of tracks and debris, dispatching 31 specialized mobile response teams to handle track repairs and adding additional cars to subway trains on certain lines, like the C train.

“Recently the state government has come to the table with a significant amount of investments,” he continued, but noted that “several issues have come to a head in recent months” as Amtrak chose to make track repairs around Pennsylvania Station, forcing the MTA to reduce Long Island Rail Road service.

The MTA also plans to implement a pilot program that would remove subway seats from the L and S lines, in order to squeeze an additional 25 riders on each car.

In an effort to cut down on trash and track fires, the agency will launch an “aggressive” public awareness campaign to educate customers on the consequences of littering and ticket riders who throw things into the tracks. The MTA already tries to clean all stations and tracks every six weeks, and now it will attempt to clean them once a month.

The MTA expects to spend $466 million in operating costs and $380 million in order to undertake the 30-plus initiatives outlined in Lhota’s presentation. Longer term updates, like replacing the entire signaling system and new subway cars, will likely cost about $8 billion and be included in the agency’s next five-year capital plan.

Lhota proposed that the city and state split the cost of the improvements—a move that seems to incense Mayor Bill de Blasio’s office, which suggested yesterday and today that the state return $450 million in operating funds that Gov. Andrew Cuomo diverted from the subway to other transit projects. At a press conference this evening, the mayor called Lhota’s plan “a step in the right direction” but said he was not willing to split the costs of implementing the MTA chairman’s initiatives. The city gave the MTA $2.5 billion in capital funding two years ago, but the agency has only spent $75 million of that capital commitment, according to de Blasio.

However, he said the New York Police Department will pitch in with enforcement against litterers, and the Fire Department of the City of New York will step up to help in emergencies that require EMTs. The city also “stands ready to help provide help addressing the challenges of the homeless [in the subway system],” the mayor said.

Other highlights of the MTA’s ambitious overhaul include increasing the number of subway cars overhauled per year to 1,100, up from 950; tripling the number of “combined action teams” to reduce the response time to track and signal issues to 15 minutes from 45 minutes; and an effort to eliminate standing water in the tracks by sealing leaks with chemical grouting and cleaning 40,000 street grates to eliminate debris clogging drains. Workers will also clean underground tracks more frequently to prevent track fires.

Since aging track and rail ties (which hold the track together) cause the majority of breakdowns and can damage trains, the agency will triple the rate of installation of continuous welded rail and install 50,000 new friction pads, which will help the existing track last longer.

To address the fact that sick passengers caused more than 34,000 delays last year, Lhota said the agency will start positioning teams of dedicated EMTs at 12 specific stations to ensure that fewer trains are stalled by passengers awaiting medical help.

The agency also hopes to improve communications with customers. It will accelerate the system-wide installation of countdown clocks and eliminate pre-recorded announcements about delays and train traffic. Within the next six weeks, the MTA will launch a new online dashboard so the public can track subway improvements and performance, like the percentage of trains that arrive on time.

The plan comes three weeks after Cuomo gave Lhota until July 31 to draft a “reorganization plan” that would identify what the state agency needs to bring its various systems up to a state of good repair. On June 29, the governor announced a “state of emergency” for the agency, which involved suspending procurement rules in an effort to speed repairs and secure funding more quickly. The state expects to put an additional $1 billion in funding toward the MTA, Cuomo said at the time.