The Plan: Inside the Renovation of 292 Madison Avenue 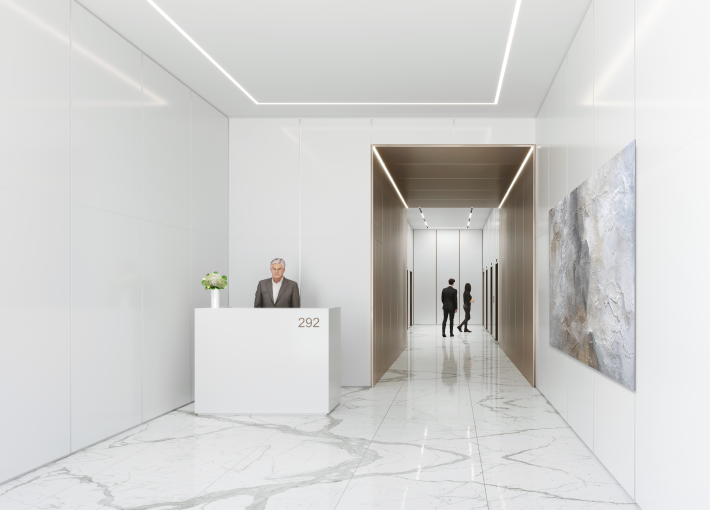 A rendering of the new lobby. Liam La Guerre

When Vanbarton Group purchased the building at 292 Madison Avenue last year for $180 million from the Marciano brothers, it knew much work had to be done—especially with the building’s lobby and entrance.

Walking into the 26-story Art Deco tower at the corner of West 41st Street felt like taking a trip back in time a few decades.

“[The lobby] was in a cherry wood paneling,” said Alan Noonan, a director at architecture firm Fogarty Finger, who designed the renovation of the building for Vanbarton. “It was about eight or nine years old, but it felt extremely dated. It had to go. It looked like it was from the 1980s.”

So the redesign of the 203,000-square-foot structure, which is just a block from Grand Central Terminal, will feature a modernized lobby with white stone walls, revitalized marble flooring and bronzed glass on the walls and ceiling of the corridor leading to the elevators.

Construction to renovate the structure began earlier this year with upgrades to the building systems. Work on a new lobby, canopy, entrance and buildouts of old office spaces is slated to begin soon. The renovations will cost between $5 million and $7 million.

In the case of office space, older vacant units will be demolished and whiteboxed and crafted to allow for more open-plan workstations. The building features full-floor spaces of 3,000 square feet to 11,000 square feet, some of these will be prebuilt units to attract mid-sized financial services firms or technology, advertising, media and information tenants.

Fogarty Finger’s prebuilt designs include dark stain oak wood for reception area walls and sleek carpeting and sofas in social common areas. Each of the floors will have a pantry and four single-occupancy restrooms, and the architecture firm will include glassy conference rooms and a mix of polished concrete and oak flooring in the units.

The 25th and 26th floors will be transformed into a duplex of about 6,000 square feet plus an outdoor terrace. Vanbarton expects to complete the bulk of the work by the fourth quarter of this year. It is also exploring adding an amenity, such as a bike room, in currently unused cellar space.

Despite the modernization, Vanbarton plans to expose the buildings interlocked steel columns in prebuilts, to reveal a piece of its history.

“One of the attractive attributes we found with this building was that it did have great bones, but much of it was covered by sheet rock,” said Jeremy Sedrish, a senior vice president at Vanbarton. “We want to mix that old with the new, showcasing the property’s exposed brick and beautiful steel columns, while also further infusing the building with modern technology. That combination is attractive to today’s tenants.”

Also, while the lobby and entrance will be brand new, the façade of the structure will only be revitalized but not changed from its historical look—since the limestone and brick exterior gives off that classic New York vibe.

It will be “the right combination to attract tenants that appreciate that history but want to feel like they are walking into a trophy-level building,” said CBRE’s Neil King, who is working on a team representing the building.

CBRE is marketing 70,000 square feet of space with asking rents between $70 and $80 per square foot.