Stat of the Week: 23 Tenants 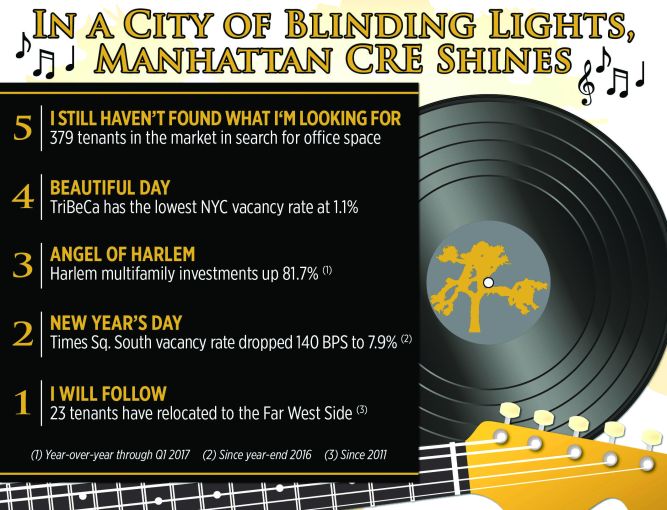 Earlier this year, U2’s The Joshua Tree turned 30 years old. This album was the one that truly put the Irish rock band on the global music scene. So, whether you just think Bono is cool or you’re a fan of arguably one of the best rock bands to emerge out of the 1980s, I thought it would be a nice tribute to one of my favorite albums to write a U2-themed Stat of the Week. So, to start off on the right note, Midtown is the market “Where the Streets Have No Name”…only numbers.

5. “I Still Haven’t Found What I’m Looking For”—There are currently 379 tenants in the market in search for office space equal to or great than 10,000 square feet, but… they still haven’t found what they are looking for.

4. “Beautiful Day”—In one of my favorite U2 songs, the lyrics “But there’s no room, no space to rent in this town” made me think of the Tribeca submarket, which has the lowest vacancy rate in New York City at 1.1 percent. Clearly, it’s a beautiful day for Tribeca landlords.

3.  “Angel of Harlem”—Harlem multifamily investments are off the charts with sales volume up 87.1 percent through the first quarter of 2017, as 58 properties were sold compared with only 31 one year ago. Additionally, dollar volume is up 44.8 percent, with $400 million in sales recorded during 2017.

1.  “I Will Follow”—Since Coach signed on as the first tenant at 10 Hudson Yards in 2011, 22 tenants have followed suit, transforming the Far West Side into the next big neighborhood of the Midtown office market.