How Scabby the Inflatable Rat Became the Ultimate Union Symbol 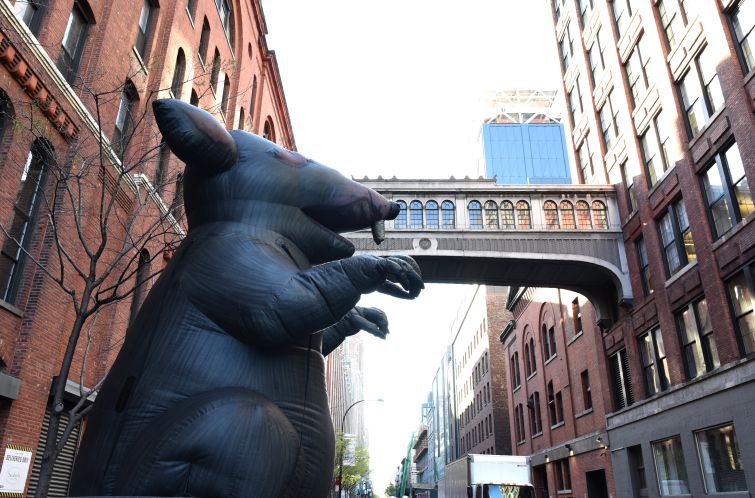 You’ve seen it while walking the streets of New York: the 15-foot-tall inflatable rat with a bubbling, diseased-looking pink belly and big buck teeth. His name is “Scabby the Rat,” and he’s a staple of union construction protests across the country.

Whenever the building trades are dissatisfied with a developer—typically for using nonunion labor on a project—they’ll set up a picket line outside the site, blow up their rat (or sometimes a feline if their focus is a despised fat cat) and announce their displeasure over megaphones. But these days, unions have been known to employ the rat against anyone they consider an enemy of their cause.

“The union rat, the idea of the rat as the scab, or as a union-buster, is a fairly old term within unions,” said Erik Loomis, a labor historian at the University of Rhode Island. “It’s sort of fitting of the kind of mentality that striking workers believe about people who are taking their jobs or an employer who isn’t treating them correctly.”

Sometimes unions even use them in turf battles with each other. In February, The New York Post reported that Local 1 of the International Union of Bricklayers and Allied Craftworkers erected their rat across from Grand Central Terminal to protest MDB Development Corp., which had awarded a contract for façade work at office building One Grand Central Place to a rival union. In response, the owner of One Grand Central, Empire State Realty Trust, deployed a cat that towered over Local 1’s Scabby. The union “quickly turned tail, deflating their rat and scurrying away,” the Post wrote. A few days later, Local 1 returned with a 20-foot-tall rat that stood even taller than ESRT’s cat.

The bricklayers threatened to get a permit from the city and bring in an even larger, parade-style rat balloon. Ultimately, they decided against it because it would block traffic and inconvenience New Yorkers, said Mike Barbera, a vice president and field representative at Local 1. Barbera explained that they originally put up the rat to draw attention to the fact that MDB wasn’t paying its workers prevailing wages.

He added, “No one from any other union contacted us on that project claiming that they represented any of those workers. If they claim to be another trade union, so be it…but it makes one wonder what the union was and what its motivations were.”

When Commercial Observer asked ESRT about the dueling cat and rats, a spokeswoman for the real estate trust simply responded, “Meow.”

The rodent, which has a Twitter account, @ScabbyTheRat, run by a Chicago-based activist, was even enshrined in the revamped version of the 421a development tax break signed into law by Gov. Andrew Cuomo last month. Under the legislation, developers of projects with 300 units or more have to pay their construction workers specified minimum wages, or else they face a fine from the city. However, builders won’t get slapped with the financial penalty if workers engage in a protest activity that interrupts construction, ranging from strikes to protests with the “use of the rat or other inflatable balloons or similar displays.”

Historically, “scabs” or “rats” were workers who crossed a picket line to replace union workers during a labor strike. While Scabby often seems like a tool for intimidating and shaming business owners, Loomis argued that the rat boosts the confidence of workers who might be afraid of organizing against their bosses.

“Being on strike or organizing can be a scary experience,” he said. “Workers can get fired for organizing. So the physicality of a giant inflatable rat brings humor to these situations and provides a visual symbol of bravery and power and of standing up to an employer you might not otherwise be able to stand up to.”

In New York City, unions have been using the rat as a protest tool for more than 40 years. The first reference in print to an inflatable rat used in a union demonstration CO was able to find was in a 1976 New York Times op-ed lamenting a sanitation worker strike.

But the blow-up vermin we’ve come to know and love didn’t exist until 1990. The Chicago branch of the Bricklayers and Allied Craftworkers approached Big Sky Balloons and Searchlights and asked it to design a symbol that would send a strong message during protests.

Peggy O’Connor, who co-owns Big Sky in Plainfield, Ill., near Chicago with her husband Mike, said the bricklayers wanted the balloon to look “snarly and mean with festering nails and teeth. So [Mike] designed the rat and the gentleman said, ‘No, make it meaner.’ ” Once Mike added the diseased-looking, pink belly and a menacing pair of red eyes, Scabby was born.

Soon, every trade union in the country wanted the rat. Today, the O’Connors produce seven sizes of Scabby, ranging from six-footers priced at $2,585 to a 25-footer at $9,295, as well as various colors (the price includes a blower, stakes and an extension cord). Big Sky offers several more protest-oriented balloons, including two varieties of “corporate fat cat” (clad in suits and clutching a construction worker in one hand and bag of money in the other), “greedy pig,” bulldog, cockroach and border patrol agent. It even designed a bed bug—a modification of the cockroach balloon—for a group protesting a New York City hotel with a bed bug problem. The company sells 40 to 50 union balloons a year, O’Connor estimated.

Scabby also stands on strong legal footing. In 2011, the National Labor Relations Board ruled that the inflatable rodent was a form of symbolic speech protected by the First Amendment. Then in 2014, a Brooklyn federal judge upheld the right of a local laborers’ union to deploy the rat in a protest and argued, once again, that it was a form of free speech.

In an age when organized labor—particularly in construction—doesn’t wield the power it once had, Scabby continues to help galvanize workers. People still have strong reactions to the rat, Loomis said, because it’s “the only really tangible symbol of union actions in this country.”