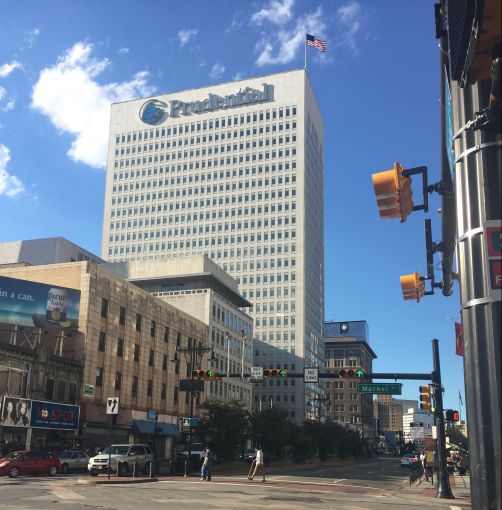 Of all the commuter cities west of the Hudson River, Newark, N.J., gets the least respect from real estate professionals.

Some of the reasons for this are understandable; Newark is more of a pain in the posterior to commute to than Jersey City. It doesn’t have the stock of brownstones of Hoboken. The city was devastated by riots a half-century ago and never quite regained its footing.

But those objections look puny when you consider that major real estate players like Edison Properties and Lotus Equity Group and basketball legend Shaquille O’Neal are investing tens of millions of dollars into hundreds of thousands of square feet of real estate. And the fact that the crime rate is the lowest it’s been since 1967.

“We think the way to change the dynamic is to create critical mass,” Ben Korman, the chief executive officer and founder of Lotus, told Commercial Observer. “It can’t happen organically.” And Korman is not the only one doing his part.

Here are five reasons Commercial Observer is paying attention to Newark—and why other real estate professionals should, too.

We have to give the Pritzker Prize-winning architect Richard Meier, who was born in Newark, props for the fact that he’s pouring his considerable talents back into his home turf in the form of Teachers Village.

Teachers Village—the first of a multiphase mixed-use project in Downtown Newark—consists of six buildings with 204 residential units, 140,000 square feet of charter school space and another 65,000 square feet of retail, which just received its final temporary certificate of occupancy in May.

“One of my partners—Nicolas Berggruen—knew Meier,” said Ron Beit, the CEO and founding partner of RBH Group, which developed the project. A meeting was arranged and the international architect was intrigued at the idea of creating a master plan in the center of the city.

“He really rose to the challenge,” Beit said. “He was very fixated on great design but knowing we had very fixed budgets.”

Beit started assembling lots for the project in 2005. The idea behind Teachers Village was that education and educators would be at the heart of the project. “Our goal is to get 70 percent teachers [as residents],” Beit said. They’ve marketed it directly to educators and found that the reaction has been extremely positive. “Just the fact that we have a community for them makes teachers feel supported.”

All but a handful of the apartments are leased, and Beit is gearing up for the next phase of his master plan: Four Corners, three ground-up buildings consisting of a 130-key hotel, 107 rentals and retail, which he’s aiming to have finished in the second quarter of 2019.

Can an area gentrify without the requisite Whole Foods? Well, Newark won’t need to worry about finding out. A 30,000-square-foot Whole Foods opened earlier this year at the old Hahne & Company building, just across Military Park from the New Jersey Performing Arts Center (NJPAC).

But the Whole Foods is only one reason to get excited about that particular building; it is the anchor of the 115-year-old, 400,000-square-foot namesake department store (with another 100,000 square feet tacked on) that had been vacant since the 1980s and has been converted into a mixed-use extravaganza.

“Rutgers [University] is taking about 50,000 square feet for a collaborative arts space,” said Jonathan Cortell, the vice president of development for the building’s developer, L+M Development. “They’re one of the vital anchors of the project.” But there’s more: Chef Marcus Samuelsson of Red Rooster is opening up a 2,250-square-foot restaurant on the project’s Halsey Street border. There’s also a Petco; a Kite + Key (the Rutgers equivalent of an Apple store); and a coworking space all in the works.

And we haven’t even mentioned the Hahne Building’s 160 apartments (64 of them affordable), which is almost entirely rented. (Market-rate studios start at $1,800 per month—something Newark could have never dreamed about a decade ago.)

The project—which had been developed with Prudential Financial and Goldman Sachs and Citi Community Capital—proved so successful that L+M is already laying the groundwork for the trio’s next Newark project: 540 Broad Street.

The new, 400,000-square-foot project is slated to consist of retail on the first floor, offices from floors two to five and residences from floors six through 20. L+M is planning 263 apartments, 80 percent of which will be market rate and is aiming for completion at the end of 2018.

Not everybody on the New York side of the Hudson knows the short-lived history of the Newark Bears.

The minor-league team was formed in 1998, and some major talent played in their uniforms including Ricky Henderson, Jose Canseco and his brother Ozzie. (It must be admitted, though, it was when all three were on their way out of professional sports.)

But the team was not really built to last; the Bears filed for bankruptcy in 2008 and played their last season in 2013.

However, the stadium made for an enticing piece of real estate for Lotus’ Korman, who is taking a big swing at the property when he picked up the stadium last fall for $23.5 million.

The plan that Korman has drawn up is for a 2.3-million-square-foot mixed-use development, consisting of housing, office, retail and cultural space. (Sorry, baseball lovers; the stadium will be razed.)

“We’re doing everything we can to break ground in 2019,” Korman said. “We hope to start the permitting process later this year.”

This is hardly Korman’s first rodeo in Newark; through his other company, C&K Properties, he picked up the 800,000-square-foot 2 Gateway Center in 2006.

“Brooklyn has a lot of housing and not much office presence,” Korman noted. “It’s the opposite problem here.”

The list of corporate behemoths that have chosen Newark as their home would impress the most skeptical observer: Prudential has their world headquarters in Newark. (The insurer has been in the city since the 19th century, and the city’s indoor arena that opened in 2007 and hosts the New Jersey Devils is named the Prudential Center.) There’s Audible, which has 1,000 employees and is gearing up to expand its office space dramatically. (Last month, The New York Times ran a story about how Audible was paying $2,000 a month in free rent at the Hahne Building for 20 of its lucky employees as part of a housing lottery.) Panasonic’s North American headquarters is in Newark.

Richard Meier isn’t the only Newark son who came back to make his mark on his hometown’s skyline.

Basketball legend Shaquille O’Neal has also returned to spread some of his largesse with the under-construction One Rector, the 168-unit rental on which he is a backer along with Boraie Development.

The $75 million ground-up project adjacent to NJPAC will feature market-rate studios starting at $1,400 per month, one-bedrooms beginning at $1,700 per month and two-bedrooms starting at $2,300 monthly. “It’s an affordably priced building,” said Wasseem Boraie, the vice president of development at Boraie.

Of course, O’Neal has been “involved with a lot of things in Newark,” Boraie said. “We developed a movie theater, CityPlex 12, with him.” This replaced a six-screen Loews multiplex a few years ago. As for One Rector, the project is expected to be completed next year.

“I’ve always believed that residential will unlock the value in Newark,” Boraie said.