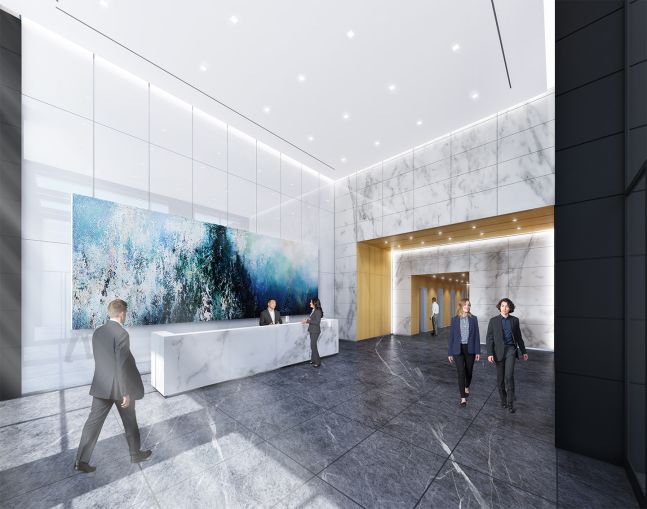 The lobby of the building will be revitalized with more modern aesthetics. Rendering: Gensler Liam La Guerre

One could call this a $20 million case of keeping up with the Joneses.

When U.S. Bank signed a 68,000-square-foot deal to relocate its offices this October from SL Green Realty Corp.’s 461 Fifth Avenue to nearby 3 Bryant Park, SL Green figured it was time to spruce up its building.

The 28-story, 210,000-square-foot Fifth Avenue tower between East 40th and East 41st Streets wasn’t falling apart or anything, but the vacancy provided a good time to revitalize the nearly three-decade-old property.

“So in the face of a large percentage of the building became available it’s an opportunity to refresh the building’s public areas and become competitive in the marketplace,” Steven Durels, an executive vice president at SL Green, told Commercial Observer.

Designed by Raul de Armas of Skidmore Owings & Merrill (SOM), the building opened in 1988. Since then, a lot of properties have been shooting up around the park, such as the Bank of America Tower, known as 1 Bryant Park, and 7 Bryant Park.

No doubt, the upgrades will help SL Green’s buildings compete for tenants for its 80,000 square feet of vacant space on the sixth through eighth floors, and the 10th, 12th, 14th, 16th, 19th and 25th floors.

For the $20 million makeover, SL Green tapped Gensler to redesign the building’s lobby, plaza and entrance. The landlord also plans to install new elevator cabs and renovate the bathrooms. SL Green is currently vetting bids from contractors to do the work, but it expects construction to begin in the third quarter of the year and the project to be completed in the middle of next year, Durels said.

Currently, there is a lot of dark wood and dark stone materials in the lobby and near the elevator areas of the property. SL Green hopes to brighten things up a bit with more contemporary color palattes. White glass material will be added to a wall in the lobby, which leads into the entrance of the building and an off-white stone will grace other walls in the lobby. Also the plaza will be completely revamped with new stone flooring.

Following the renovation of the common areas and the façade, SL Green plans prebuilt units for some entire floors. The landlord selected a CBRE team of Ben Friedland, Silvio Petriello, Sam Seiler, Jason Pollen and Zak Snider to market the vacant space in the building.

The brokerage team is targeting boutique financial services companies, including hedge funds and private equity firms, that are looking for entire floors. The tower floors—which start at the 10th floor—are around 7,000 square feet, while the base floors have just over 11,000 square feet.

“It’s a different feel when a company has a floor to themselves,” Friedland said. “And a 7,000-square-foot tenant can’t do that in some places.”

Also Durels said the floors could work for other types of tenants, including law firms and technology companies, because of the features.