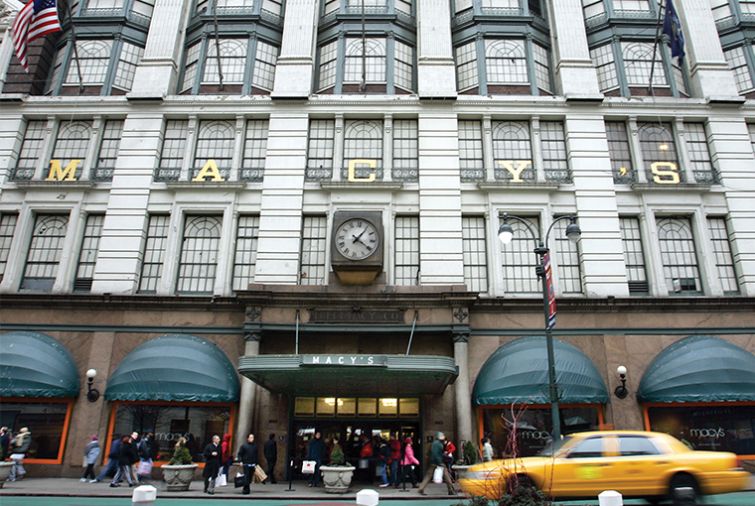 Retail rents have dropped dramatically in Herald Square, which is home to iconic flagship stores like Macy's. Photo: Stephen Chernin/ for Getty Images

A struggling retail market means tenants are going to rent space this year for nearly a third less than they did during the retail peak in 2014, according to a new report from CBRE.

Average asking rents have dipped 2.7 percent across Manhattan retail corridors year-over-year. But the brokerage predicts that net effective rents—which factor in free months of rent and tenant improvements—will be substantially lower. Retail rents hit record highs in 2014, and today’s tenants will be able to sign leases at net effective rents that are 20 to 30 percent less than they did three years ago, CBRE’s report indicates.

Landlords would rather negotiate concessions (which decrease net effective rents) than lower asking rents in large part because they finance their buildings on the condition that they’ll secure certain rents.

“Investors have expectations of returns, so they need to keep rents at a certain level so they match the pro-forma,” CBRE researcher Nicole LaRusso, who authored the report, told Commercial Observer. “And then they negotiate all these concessions on the side. So asking rent might not be down, but net effective rents are.”

Cap rates for Manhattan retail properties have also shrunk to between 3 and 4 percent. The trend reflects a seller’s market where properties trade for steadily increasing prices, even as rents take a dive, LaRusso explained. It highlights the disconnect between Manhattan retail rents, which soared 90 percent between 2010 and 2014, and the borough’s retail sales, which grew 32 percent over the same period.

“In order to catch up to what landlords are looking to find in terms of rent, we need to see a little more growth in retail sales,” she added.

While average asking rents have dropped nearly everywhere in Manhattan since 2014, a handful of corridors have seen major dips. Rents along Broadway in Soho have slid 22 percent, and landlords on 34th Street in Herald Square are commanding 33 percent lower rents. Other hard-hit strips include Madison Avenue between East 57th and East 72nd Streets (21 percent decrease) and Broadway between West 72nd and West 86th Streets on the Upper West Side (25 percent decrease).

And the highest price corridors have seen some of the most precipitous rent decreases, because both luxury brand sales and tourism have declined over the past year, LaRusso said.

The brokerage blames declining rents on the growth of e-commerce, the overexpansion of national chains and the slow death of department stores.

“It’s one thing to open up a store on Third Avenue [or] on Columbus Avenue, [but] it’s a very different thing to open up a store on Fifth Avenue or Prince Street that could be a $5 [million] or $8 [million] or $10 million rent for a year,” said Cushman & Wakefield’s Alan Schmerzler. “For that rent, I could open several stores in malls around the country. Until rents come down to the point where I can defend that decision.”