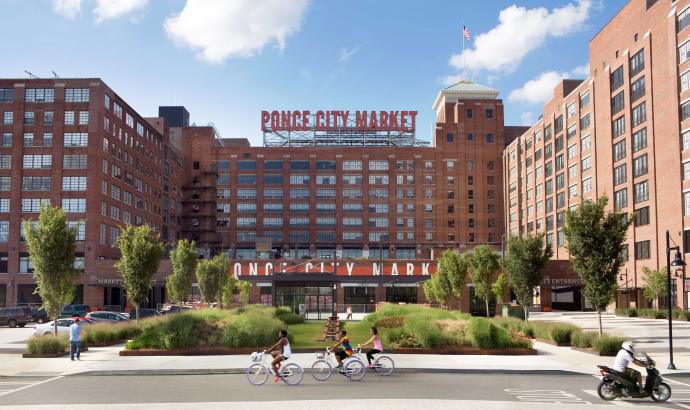 The apparent connection between bricks-and-mortar stores and digital retail sales has motivated at least one landlord to track that correlation.

About eight months ago, Jamestown began using technology from two separate firms to inform tenants at its retail centers of how much their physical locations were driving business online, Michael Phillips, president of Jamestown and a principal at the Atlanta- and New York-based developer, told Commercial Observer at the International Council of Shopping Centers’ annual RECon event in Las Vegas this week.

“The symbiosis between store and online is the most important one,” Phillips said. “This technology allows us to know with [great] accuracy that there was a direct connection between bricks and mortar and the [online] consumer.”

Using the data, Jamestown can learn where its core shoppers are hailing from as well as their behavior patterns, such as which stores they visit and how often they visit a store only to later make a purchase through that retailer’s online store. This comes in handy if a tenant complains to Jamestown about sales slowing down, for instance, as the landlord can then provide consumer intelligence showing the value of its physical location.

Jamestown, which owns 12 retail-based developments in seven major urban markets including New York City, is piloting the technology at its Ponce City Market in Atlanta, and as of ICSC was rolling it out at other properties.

Alan McKeon, the president and chief executive officer of Alexander Babbage, told CO that the data being tracked by the research firm spotlights a trend that many retail market observers have noted in recent years: that physical, brick-and-mortar locations can help increase online sales for retailers.

“Bricks do work, and have [a positive] impact on online sales,” McKeon said. “It’s not about online or offline [retail], it’s about online and offline and blending the two effectively.”

Garrick Brown, Cushman & Wakefield’s director of retail research for the Americas, said this trend has manifested particularly through “clicks-to-bricks” companies like Bonobos and Warby Parker, which established themselves first as e-commerce retailers before venturing into physical locations.

“Almost all [clicks-to-bricks retailers] have told me the same thing—that when they open a store in an area, their actual e-commerce in the same area shoots up 15 to 20 percent,” Brown told CO earlier this month. “The physical store becomes the embassy of their brand.”

The deployment of technology to pinpoint retail trends is also a testament to how the brick-and-mortar retail industry has found itself having to catch up to the e-commerce sector, which for years has used data and analytics to cater to consumer trends and personalize the shopping experience.

“It’s a game of catch-up with every online retailer that probably knows more about us [as consumers] than we know about ourselves, in terms of behavior,” Kate Newlin of Newlin Consulting, a brand consultant for retailers and manufacturers, told CO. “It can feel innovative if you’re looking at retailers, landlords and mall developers. [But] they’re coming late to the game because they have to; they can’t avoid it any longer.”

McKeon said that Alexander Babbage “specialize[s] in driving shoppers to physical destinations” by utilizing a combination of “big data analytics, geographic data systems, and consumer behavior and psychology.” The firm uses its research to help clients “better understand who the shopper is and what they’re doing,” he added, noting: “If you know what [shoppers are] doing, you can influence them.”

David Brennan, a professor of marketing and co-director of the Institute for Retailing Excellence at the University of St. Thomas, noted that retailers have generally deployed customer-tracking data and analysis for a number of years—whether that’s through technology or simply closed-circuit cameras.

“I think, for the most part, retailers have already been using [such methods] for a number of years,” Brennan said. “What it amounts to is observational information.” Brennan noted that retailers have long been able to track customers’ whereabouts in a given store via cell phones’ GPS technology, and have also utilized “observational cameras” to inform everything from store layout to merchandizing.

Brennan added that companies like Jamestown are using relatively new technologies that, by and large, serve the same purpose. “The attempt is to collect data from a wide variety of sources so they can [obtain] analytics on their consumers,” he said.

Update: This story has been updated to include comments from Alan McKeon, president and CEO of Alexander Babbage.