The Plan: A Window Into the Renovation of 1411 Broadway 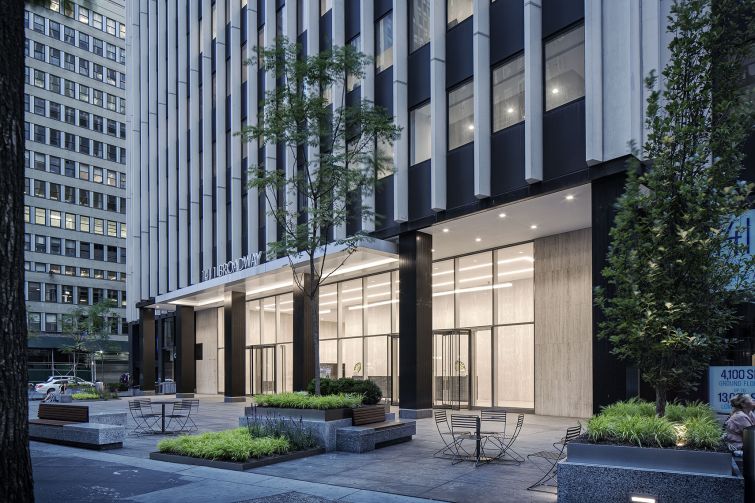 The windows of the tower at 1411 Broadway, which was built more than 45 years ago, had become etched and dirty when Ivanhoé Cambridge and Callahan Capital Properties acquired Blackstone Group’s stake in it in 2012.

After the $360 million purchase, the landlords (The Swig Company also has a stake) considered just washing the glass of the 40-story building, which occupies the entire block between Seventh Avenue and Broadway and West 39th and West 40th Streets. But then the owners reversed course and focused more on the long-term.

“For a reasonable premium, we could change the windows to modern ones providing thermal insulation,” said Michael McMahon, a senior vice president at Callahan Capital Properties. “You’ve got the UV protection built into the glass. It was just hitting all of the right points, and it just made the best sense for us to invest in the new windows.”

Replacing all of the 4,700 windows at the 1.2-million-square-foot building will begin in May and marks the final phase of a $60 million renovation to update the tower, which began by giving a shine to the steel and concrete façade five years ago (nothing was replaced, but the façade got a thorough cleaning).

The window replacement will occur while the building is still operating. The landlords have brought in Skyline Windows to oversee the work, which it expects to do floor by floor during nights from around 8 p.m. to 6 a.m. to “minimize disruption to tenants,” McMahon said. Toward the end of the shift, workers will clean up and prep tenants’ spaces affected by the window swap for business as usual again the next morning. The project is expected to be complete at the end of first quarter of 2018.

“It was built in 1969. It was tired. It had great bones. It was built as a high quality office product, but it needed to be upgraded,” McMahon said. “It needed to be modified to appeal to a broader range of tenants.”

The type of tenants McMahon is referring to have been eyeing the Garment District of late: financial services as well as technology, advertising, media and information (or TAMI).

More than a year ago, the landlords hired MdeAS Architects to redesign the 15,000-square-foot front public plaza and the building’s lobby, which sports approximately 20-foot high ceilings.

The building’s public plazas, which are on both the Broadway and Seventh Avenue sides, featured nothing but concrete and a sculpture, so the architects added plants, seating and lighting.

“The plaza…was not interesting and not a very well maintained expanse of concrete,” said Dan Shannon, a principal of MdeAS Architects. “Now there are a lot of people that come and have their lunch there. So with landscape and seating and lighting, we were finally able to vitalize that outdoor space so people can use it.”

Also, the new owners updated the lobby of the building with a light-colored Travertine stone to keep the classic look. They also added a canopy outside to match the façade.

“We were not trying to make it look like, ‘Here is the new stuff!’ ” Shannon said. “We were trying to make a complete harmonized design so that, in the end, it doesn’t look like an add-on.”