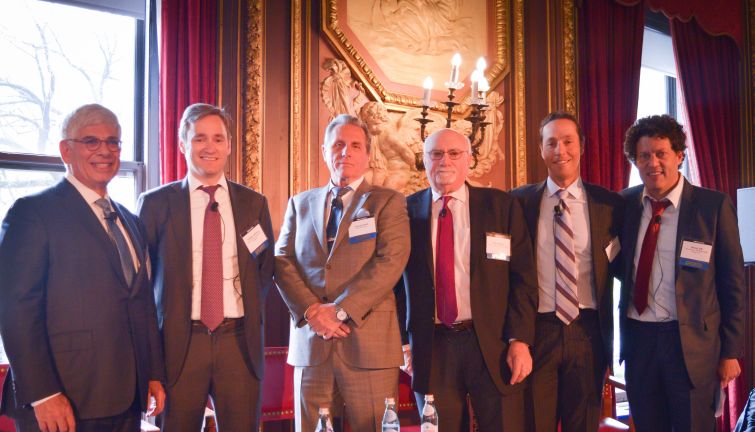 On a rainy day in Manhattan, some of the industry’s heaviest hitters took shelter at the Metropolitan Club to discuss the state of the market at Commercial Observer’s Financing Commercial Real Estate Forum. Here are the highlights.

The State of the CMBS (Dis?)Union

What’s ailing the pipeline for commercial mortgage-backed securities at the moment? Depends on whom you ask.

“A lively panel on CMBS” is a rare sentence to utter indeed, but it was in fact what took place  yesterday morning when bankers, brokers, an executive from Morningstar Credit Ratings and a work-out specialist got together for a chat.

Fears surrounding risk retention rules hampered CMBS origination for the first half of 2016, said Christopher LaBianca, managing director at UBS Real Estate Finance, before the deal pace finally picked back up in the fourth quarter. Now, pervasive trepidation about retail—the validity of which was a matter of much debate—and stagnant lending for multifamily, since agency loans are available, hinder the CMBS market, said Paul Vanderslice, co-head of U.S. CMBS at Citigroup.

Public perception of “the industry’s misdeeds,” has curtailed the use of CMBS loans, LaBianca said. Ronnie Levine, senior managing director at Meridian Capital Group, agreed. “Rarely does the borrower say ‘please get me a CMBS execution.’”

In order to compete, CMBS lenders are offering longer term loans—ten years is the “sweet spot,” said Levine, and banks often can’t do such a long term—and giving borrowers significant interest-only periods. “The I-O component is going up,” Vanderslice confirmed.

“I love the I-O,” chimed in Rob Verrone, founder of Iron Hound Management Company, which represents borrowers and also does work-outs. He sounded downright gleeful.

With retail and hotel lending dwindling, office loans have taken up some of the slack in conduit deals—but not enough to mitigate the headlines about CMBS loans gone awry. Such stories often center on the troubles of retail, specifically malls.

“The problem is how to underwrite them,” said Levine of retail assets, because the qualitative differences between properties are hard to account for. Verrone said he can tell if a shopping center will “live or die,” by “driving past it.”

“Slowing demographic areas,” are often more of a red flag that an asset is doomed than the anchor tenant, offered Lea Overby, managing director of structured finance at Morningstar. But headlines have focused on the troubled anchors like J.C.Penney, Kmart and Macy’s. Vanderslice even joked that the media is obsessed with CMBS: “they’re 15 percent of the market and 85 percent of the press.”

Repurposing a mall property runs a borrower between $25 million and $30 million, said Levine. It’s been hard to find lenders who want to take on that risk.

Vanderslice, for his part, thinks the retail fears are “the new risk retention”—i.e., that the worries about them are overblown. He said he anticipates between $75 billion and $80 billion in CMBS origination in 2017, up from an estimated $60 billion last year.

The second panel of the day saw traditional lenders go up against their non-traditional competition (not literally, although a cage fight was suggested later in the day by Mark Edelstein and Commercial Observer will certainly consider this for future events).

Non-traditional lenders arguably controlled the market in 2016, stepping in where banks feared to tread (or were prohibited from treading, rather), and have a continued presence this year which means “there’s an ample supply of capital out there,” said Jeff DiModica, president of Starwood Property Trust.

Timothy Johnson, head of U.S. originations at Blackstone Real Estate Debt Strategies, pointed out the increasing number of equity players starting a debt platform but warned that “It’s a different animal. It can’t be a side job.” Johnson went on to say that there is a new level of sophistication in the industry and “Investors are not confused about which part of the capital stack they are investing in.”

One of the key differences between banks and nonbanks is the level of regulatory scrutiny they face. Alan Wiener, group head of Wells Fargo Multifamily Capital, discussed the regulatory microscope on banks when it comes to construction lending and (shudder) Basel III’s HVCRE rule. Banks are still making construction loans, Wiener said, but ultimately a deal’s sponsor is key. “Who we lend to is ‘A’,number one on the hit parade,” he said. Additionally, Wells Fargo prefers larger deals that can be syndicated, Wiener said.

While the construction lending conversation continued, Simon Ziff, president at Ackman-Ziff, said that he had predicted that a certain active-yet-mysterious Arkansas-based bank’s name would come up 10 times by 10.30am. Such was his confidence in this fact that he made a wager with his colleague. A bet that was sadly lost (sorry, Simon) as Bank of the Ozarks’ name didn’t cross any of the panelists’ lips except for his.

Ackman-Ziff has arranged $800 million in construction funds across five deals lately, Ziff said. The deals included rental, mixed-use and office properties but no condominium projects. Ziff also said he noticed that nailing down equity for development deals is tougher when compared with previous years, and a lot more calls have to be made before an equity source is found for a project.

It’s safe to say that George Klett, chairman of the Commercial Real Estate Committee at Signature Bank, would like to see a little less interference from the government. Klett gave the example of Washington, D.C. regulators warning banks such as his that “interest-only is too risky,” but frustratingly giving no justification behind the statement when questioned. Granted, it’s hard to tell a bank with a $22 billion real estate loan portfolio and zero recorded losses that it doesn’t know what it’s doing.

While nonbanks aren’t at the mercy of government meddling, firms such as Starwood have regulators of another kind. “Our shareholders are our regulators, and they vote every day,” said DiModica.

Moderator Jay Neveloff ended the panel by asking the group to peer into their crystal balls and predict where interest rates would go over the next year or two. Neveloff got a taste of the life of a reporter when the panelists politely declined to comment. “This panel is way too smart to predict interest rates,” Ziff said.

The morning’s final panel featured executives from some of the top multinational banks—including TD Bank, HSBC, Helaba Bank and Industrial and Commercial Bank of China—who discussed the pros and cons of having global real estate lending operations and worldwide trends in the commercial real estate financing sector.

With their worldwide presence, those banks have been able to capitalize on global capital flows that have targeted U.S. real estate in recent years. “Even though real estate lending is a domestic business, more and more of our clients are coming from overseas,” said Glenn Grimaldi, executive vice president and head of commercial real estate banking for HSBC’s U.S. operations.

Grimaldi noted that HSBC has seen “a lot [of capital] coming from China and the Middle East,” in particular, with international investors “typically” targeting core markets and gateway cities in the U.S. He added that the London-based banking giant’s global operations give it valuable knowledge of, and access to, the foreign capital flowing into U.S. property markets—describing it as a “distinct advantage of the global bank in the U.S.”

“We’re the bridge to introducing them [to domestic debt and capital markets],” Grimaldi said. “Often, the global banks up here [on stage] are the first place they’ll go.”

Jerome Sanzo, the head of real estate finance for ICBC—the world’s largest bank by total assets—has seen “tremendous demand from Chinese investors” in the U.S. as well as other global markets, but said he believes that “it’s difficult to expect the same levels of investment moving forward.”

Sanzo noted that ICBC only launched its U.S. real estate platform in 2015 (”a little late,” as he put it) and that the bank has set its sights high—focusing on “very large transactions” involving sponsors and assets in gateway, coastal markets with quality track records.

The panel spent a good deal of time discussing the present state of the construction financing market. Rick Lavrich, senior vice president at Germany-based Helaba, said the institution has targeted borrowers who “have real skin in the game” on construction financing deals, a segment that some domestic lenders have shied away from given increased regulation, as well as perceived softness in asset classes like residential condominiums and hotels.

Sanzo said that in his role at ICBC, he could easily vet “at least one construction loan package a day,” which he has interpreted as a sign that “a lot of other shops have cut back [on construction financing]”—a position the Chinese bank has also taken. “What more [new construction] is needed?” he asked, citing the “high-end condo” market specifically.

The impact of financial regulations were also discussed, with most of the panelists’ banks subject to banking rules in multiple countries. Lavrich said Helaba is “constantly being audited every time we turn around,” though most of the panelists took a rather nonchalant view toward the effect such rules have had on their business. Roy Chin, TD Bank’s New York regional director for commercial real estate lending, noted that he “wouldn’t say regulations have injured us on deals,” as most bank lenders are “subject to the same regulations”

Chin was also more skeptical on the state of the real estate market moving forward, noting that TD is expecting its real estate originations to be down “20 percent below last year” and saying that he is “anticipating a slowdown,” particularly in markets outside New York.

“I think New York is fine, but I do sense there’s a whole lot of product out there,” Chin said, citing the market’s challenge “over the next 18 months” of absorbing new residential development. He added, however, that “long-term, New York is an incredibly resilient market.”