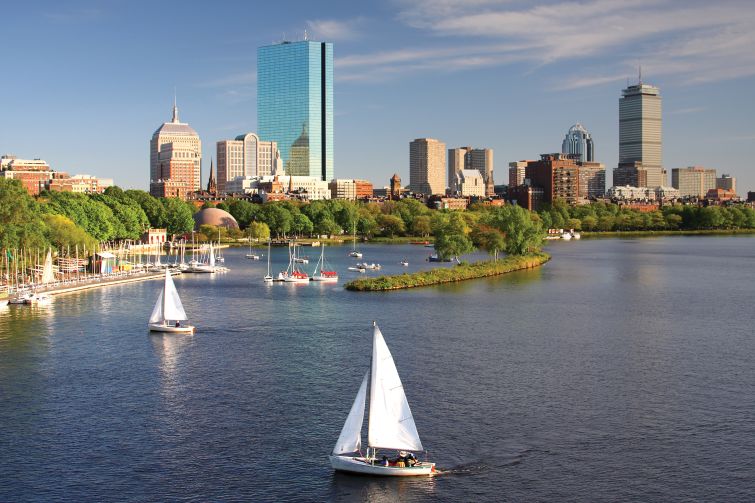 Sailboats on the Charles River with Boston's Back Bay skyline in the background. Photo: Getty Images Rebecca Baird-Remba

For commercial real estate investment, the Boston region remains one of the choicest of markets. It’s not simply because it’s less expensive than New York or San Francisco—though there’s that too—but because New England’s most populous region—4.6 million residents and counting—offers a diverse array of investment opportunities and some phenomenally solid fundamentals.

Here are the top reasons why investors should keep their eye on the area.

Office vacancy is the lowest it’s been since before the Great Recession.

This one’s pretty straightforward: Office vacancy in Greater Boston—which, besides Boston itself, includes neighboring cities such as Cambridge and Newton—fell to 13.8 percent in 2016, according to JLL. That is the lowest in at least 10 years. In Cambridge in particular, the vacancy rate is positively Manhattan-like: It was 3.8 percent at the end of 2016, CBRE tracked.

Office asking rents are the highest they’ve been since before the Great Recession.

These higher rents include even Class B space.

The average asking rent for Class B office space in downtown Boston was $46.04 a square foot at the end of 2016, according to CBRE, the highest since at least the start of 2000. This historic rise has meant that Class B rents have been outpacing those for Class A for years now. The Class A average was $59.95 a foot in 2016, well below a post-2000 peak of $70.23 in 2007. According to CBRE, this discrepancy has driven many otherwise Class B tenants “to consider low-rise options on the lower floors of Class A towers,” further shrinking vacancy.

Job growth in the Boston region is exploding—just look at GE.

These strong fundamentals are only possible because of the Boston region’s steady job growth. “In 2016 alone, Greater Boston added over 50,000 new jobs,” JLL noted in its fourth-quarter 2016 market report. “As a result of this solid, long-term growth, the unemployment rate for the Boston metropolitan statistical area is near historic lows this quarter at 2.6 percent, the lowest rate of any major metro area in the U.S.” An illustrative point for this trend was General Electric’s decision in early 2016 to relocate its headquarters from Fairfield, Conn., to Boston’s Fort Point neighborhood. The company plans to open a 2.4-acre, three-building corporate campus for more than 800 workers in 2018.

And look at the biotechnology industry.

Boston has more biotechnology workers than any other area of the U.S., according to a report from the Biotechnology Innovation Organization, a trade organization, and TEConomy Partners, a tech consultant company. Based on the latest 2014 figures, the Boston region edged out second-place New York by 1,200 employees. The area also commands some of the briskest venture capital investment in biotechnology, with Massachusetts overall second only to much larger California. (Massachusetts is actually No. 1 on a per-capita basis, according to the report.)

Landlords are undertaking or planning upgrades for large blocks of space at several prime Boston office properties in an effort to draw tenants—and spruced up office stock is something any investor should take note of. The 13-story 399 Boylston Street revamped its lobby, for instance. At 500 Boylston Street nearby, owner Hines plans to build a six-story office and retail addition in place of a courtyard in front of the 25-story building.

Meanwhile, new office development is pretty scarce in Boston. The key Back Bay submarket added the 442,000-square-foot 888 Boylston Street in December 2016, the first new high-rise in that area since 2001. The 400,000-square-foot 121 Seaport Boulevard, currently wrapping up construction, will be the only new office addition in Boston’s Seaport District in 2017. Much of the city’s ballyhooed construction boom instead centers around apartments, condos, hotels and dorms, keeping vacancy that much tighter in the office market.

Beyond brick and mortar—or the lack thereof—downtown Boston and its environs have become more attractive areas to work. One case in point: the late-November opening of a 45,000-square-foot, three-level outpost of the Italian specialty juggernaut Eataly in Back Bay’s Prudential Center. It’s the sort of amenity that would have seemed unlikely in the city’s core in years past. Now, along with new restaurants, food trucks and public spaces, the likes of Eataly seem natural. And Eataly is hardly the only one: In April 2015 the higher-end grocery store Roche Bros. opened a two-level location in Downtown Crossing.

The hotel market is one of the nation’s hottest—and tightest.

The nightly occupancy rate for hotels in Boston and Cambridge has been over 80 percent since 2013, according to Pinnacle Advisory Group. That makes the region one of the tightest nationally. What’s more, the average daily room rate has marched steadily upward from under $200 at the start of the decade to more than $250. Revenue per available room now stands at more than $200.

And there are no signs of a slowdown. Some major projects came online in 2016—the 242-key Godfrey boutique hotel in Boston’s Downtown Crossing neighborhood was perhaps the most notable—but, for the most part, hotel development is not keeping up anywhere near with demand. The dynamic can lead to spectacular returns for sellers: That Godfrey hotel cost $83 million to build—and then German real estate fund Union Investment snapped it up for just under $174 million as it opened.

As for Boston’s multifamily market, it’s nearly impossible to find one with better fundamentals.

Boston-area apartment rents have been among the highest in the nation for several years now, according to real estate listings site Zumper, which releases a monthly analysis of apartment sales in major U.S. markets. The latest, for April, pegged the median monthly rate for a one-bedroom at $2,200—behind only San Francisco, New York and San Jose.

Despite an historic building boom—more than 6,100 apartments came online in 2016—this rental dynamic does not seem likely to change. The region continues to add residents, including through its dozens of colleges, ensuring that demand continues to outpace supply.

The region remains a relative steal.

For all its fundamental strength, growth potential and streetscape attractiveness, the Boston region remains a relative bargain for commercial real estate investors compared with other U.S. cities such as New York. The most expensive commercial building sale in Boston in 2016 was Union Investment’s $452 million purchase of the 17-story 101 Seaport Boulevard, which went up just the year before. That deal penciled out to $1,027 a square foot, a record for a large office building in the city. Such a going rate would be normal for a Class A Manhattan skyscraper. In general, Boston investment sales trade for about one-third the price per square foot of similar properties in Manhattan, according to commercial real estate firm Transwestern, and for nearly half of ones in San Francisco.

Tom Acitelli, a former editor of Commercial Observer, is the editor of Curbed Boston. You can reach him at tacitelli@gmail.com