Stat of the Week: 1.2 Percent Increase 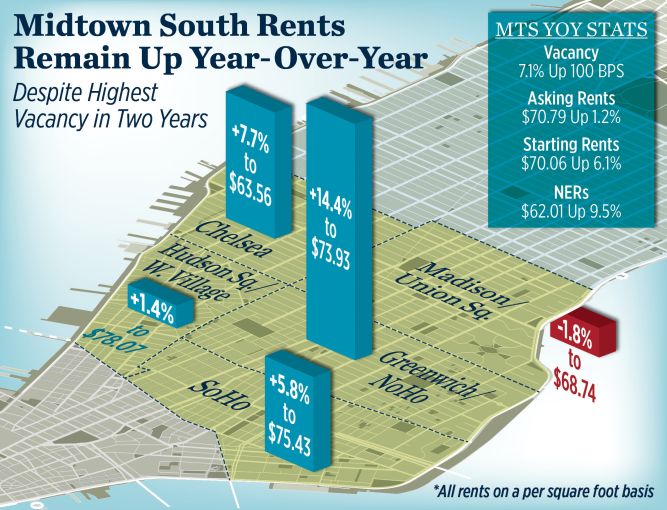 Through the first two months of 2017, the Midtown South vacancy rate jumped 50 basis points to 7.1 percent and is up 100 basis points from one year ago. It also marks the highest level attained in 24 months. The sudden uptick in vacancy is mostly due to three buildings adding significant available space to the market—330 Hudson Street, 1250 Broadway and 148 Lafayette Street. But this is much-needed space, as Midtown South still has the lowest vacancy rate of any major office market in the U.S. and only has eight blocks of space greater than 100,000 square feet available. In addition, leasing activity is off to a slow start, with only 932,022 square feet of new leases completed, 5.1 percent behind 2016’s pace.

Pricing remains at historical highs, as overall average asking rents are up 1.2 percent from one year ago at $70.79 per square foot. Of the five Midtown South submarkets, four had year-over-year asking rental increases:

Regardless of a rising vacancy, Midtown South remains the hottest market in town.

Richard Persichetti is the vice president of research and marketing at Cushman & Wakefield.