Sneaker Stores Are a Shoe-in for Landlords, Especially in Midtown 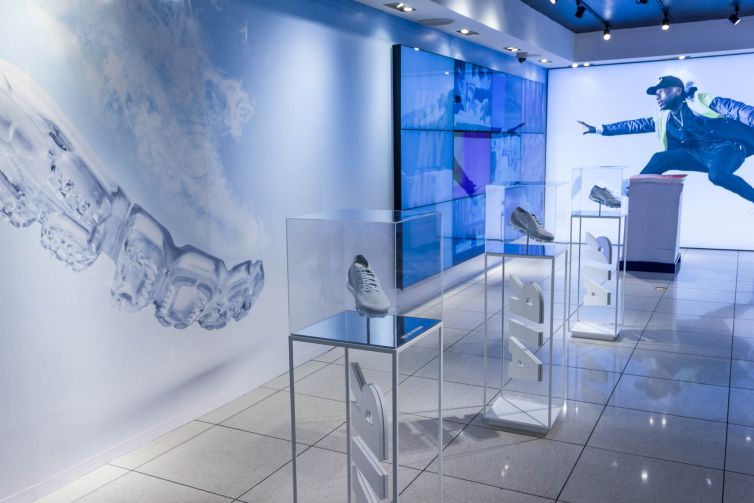 When Nike signed a lease in November 2016 for 69,214 square feet at 650 Fifth Avenue between West 51st and West 52nd Streets, for rents as high as $4,000 per square foot for the location’s 7,000-square-foot ground floor, it was just the latest indication that few retail categories are hotter or more durable these days than sneakers. (And an incredible markup from Adidas’ January 2013 deal for a 10-year lease at 435 Hudson Street, at what now seems like a crazy bargain at just $65 per square foot.)

The deal was yet another sign of how the segment exploded across Manhattan throughout 2015 and 2016, and not just in the tony parts of Fifth Avenue, even if the Nike deal might be the apotheosis of the phenomenon. In July 2015, Adidas signed a 10-year lease for a 5,219-square-foot Originals boutique store at 115 Spring Street between Greene and Mercer Streets. The following month, Nike signed for a five-story, 52,500-square-foot retail space at 529 Broadway between Spring and Prince Streets, for a net rent of $16 million per year.

That December, Adidas took over 34,000 square feet spanning three stories—nearly twice the size of its Soho location at 610 Broadway at Houston Street—for its largest store to date in North America, at 565 Fifth Avenue between East 46th and East 47th Streets, in the beating heart of Midtown.

Then Nike topped them all with its nearly 70,000-square-foot deal in November, as well as the opening of a 55,000-square-foot outlet at 529 Broadway in Soho the same month.

At a time when apparel retail has been battered by high rents and online competition, sneakers have shown to be something of a retail Holy Grail, carrying advantages that make the sneaker retail space, if not fail safe, then at least as secure as a retail store can be in 2017.

The reasons are numerous and varied. One key aspect of the growth of the sneaker market is that sneakers are a product that appeals to the widest possible demographic.

“The rural guy in Iowa, the guy in an urban setting, the suburbanite—they all wear sneakers. It basically crosses demographics,” said retail broker Jason Pruger of Newmark Grubb Knight Frank, who has worked on deals for New Balance and Under Armour (the latter is a growing player in the sneaker space). “Very few apparel categories transcend rural, urban, wealthy, poor. Sneakers transcend all that.” Pruger has been involved in numerous sneaker-related deals, including the one cited above that brought New Balance to 1172 Third Avenue, and Under Armour’s October 2013 deal for just over 20,000 square feet at 583 Broadway between Prince and Houston Streets.

As sneakers appeal to people across diverse demographic categories, the settings in which they’re worn have become more and more varied, serving as athletic wear, casual wear or even formal attire. Kanye West, Justin Bieber, Kristen Stewart, Cate Blanchett and even Sally Field have worn them on the red carpet.

“Although they’re utilitarian, they’re also fashionable,” said broker Robin Abrams of Lansco, who participated in putting Reebok into 670 Broadway between Bond and Great Jones Streets. “You have people who are not only going in and buying new product, but they are also looking for special product that may be vintage, or maybe limited orders. The whole thing has become a very vibrant segment of the footwear industry.”

Jeremy Ezra, a broker with RKF, has worked on over 10 deals with Adidas and Reebok, including putting the former into 565 Fifth Avenue, and finding space for Reebok’s Fit Club store at 1 Union Square West at East 14th Street.

Speaking about Adidas, he said he sees its positioning in the more fashion-oriented segment of the market as one key to its recent success.

“[Adidas’ recent performance] is absolutely in conjunction with them riding high on the fashion and retro component of the business and appealing to people who want [the company’s specialty brands, including] the Stan Smiths, the Superstars and the Gazelles,” he said.

The widening success of the sneaker industry speaks to its expansion from a pure footwear category to one that transcends various apparel categories and even dips into the health and wellness sector.

ABS Partners Real Estate Partner John Brod noted in an email that sneaker brands are “transforming [into] lifestyle brands and adjusting to the growing athleisure-wear sector, all as a result of greater attention to health and wellness in both older and younger segments of our population with both males and females.”

Abrams said, “You have this athleisure, healthy, in-shape attitude, particularly in urban areas, where people are dressing more casually. But even when running errands or going to the office, people tend to wear clothes that weren’t initially intended to be worn outside the gym or the yoga studio. That creates more synergy between all of this footwear product than there might have been when people were dressing more formally.”

On top of all this, sneakers have the further unfair advantage of being a product that almost requires consumers to try them on first, making retail stores less likely than those in other sectors to lose business to e-commerce.

“I see young people ordering shoes online, but not everybody does because from shoe to shoe, style to style and company to company, the sizing tends to be a little bit different,” Abrams said. “People also may go [into stores because] they want to try multiple styles all at once, or look at a variety of colors and try them in different sizes.”

Of course, when talking about a single-brand store, e-commerce is less of a threat when comparing buying online with buying on-site, since the sales have the same end result.

“Maybe to some extent, the store becomes a showroom, and [consumers] end up buying online. That’s O.K.,” Ezra said. “The store serves multiple purposes. Obviously, wanting to create bottom-line-healthy stores is a very important goal, but it’s also about building brand awareness and [providing] that experience.”

Credit for the success of the spaces lies not just with the product but also with the real estate itself, as many sites have become more of a destination than just a store. Nike’s 6 East 57th Street flagship, known as Niketown, has a half-court basketball court and a miniature soccer field and displays that treat its more expensive products like museum pieces. Most brands, meanwhile, feature constantly revolving product lines.

“More and more, the combination of experience with traditional retail is particularly strong with lifestyle brands,” Brod said. “Physical activity and ‘action’ are driving a lot of what’s happening at the store level with these brands. The benefit with brands like Nike, Under Armour and Adidas is [that] it’s easier for them to integrate the experience factor into their bricks and mortar than it is for a traditional apparel retailer.”

“These are not just sneaker stores,” Ezra said. “They have a breadth of product they can show across fashion, athletic apparel, footwear, equipment and experiential. They want people to come in and test the product. At the Adidas store at 565 Fifth Avenue, they have bleachers, where they show different sporting events, and a juice bar. They want to create a place people want to tell their friends about. It’s more competitive these days in retail, when you’re competing with online and other channels, so they have to do something special.”

The universal love of sneakers is so widespread it has translated to smaller boutique shops, as stores concentrating on specific product lines or vintage models can see blocks-long lines for specialty releases.

Zach Diamond of Winick Realty Group represented the rapper Fat Joe in finding the space for his retail specialty store Up NYC, which opened this past November at 3806 Broadway between West 158th and West 159th Streets in Washington Heights.

He said the 2,500-square-foot space is succeeding due to sneakers’ evolving status as prized collectables, or valued items that fetch a sizable markup on resale.

“[Up NYC sells] higher-end Nike and Jordan brands which are limited edition,” Diamond said. “The whole sneaker craze now is that people are waiting in line for three days just to buy shoes at, let’s say, $300, and once they get them, they turn them for $500.”

“The lines [in front of the store] started on Wednesday, and the opening was Saturday,” he said, noting that the opening featured appearances by rappers including Remy Ma and 50 Cent. “There were lines three blocks down the street before the store even opened. It was crazy.”

Given these factors, sneaker brands are often seen as desirable tenants by landlords or leaseholders who see reliable income in the strength and appeal of the brands.

“Landlords are very receptive [because while] you could do elaborate buildouts, it’s a pretty clean use,” Pruger said. “Also [these stores] tend to be more recession-proof, because the demand is there. Nothing is going to replace the sneaker.”

Abrams added, “Landlords anticipate that the tenants will do well and sales will be strong. But regardless, these are large global companies, and even if the sales don’t support the store, the company certainly will be strong enough to do so.”

While many other retail segments are struggling, the sneaker market is showing that with the right product and approach, retail can still attract the masses and rack up sales that justify expensive Manhattan rents.

“We’ve had an issue with absorption, and there [has been] real concern over who the next viable crop of retailers are going to be who can afford the high rents in New York,” Ezra said. “You look at this category, almost everybody wears sneakers or athletic clothing at some point. These are great brands, and they’re building fun, cool experiences. I think [these stores] bring a lot of optimism to the world of New York real estate.”