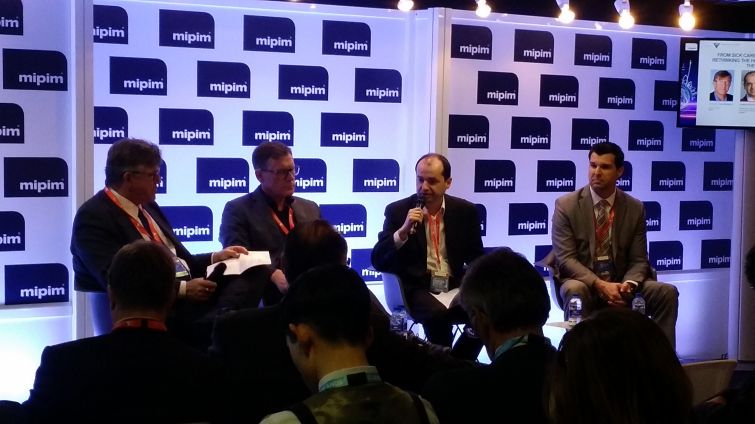 The integration of new technology that allows people to monitor their health or get a diagnosis without leaving their homes is increasing and could change the need for people to go to hospitals, experts said today at the annual Marché International des Professionnels d’Immobilier (MIPIM) conference in Cannes, France.

This was one of the issues which was covered at a panel titled, “How does rethinking the health care industry impact the real estate industry?” on the first day of the international event.

Moderator Scott Muldavin, a senior adviser at Chelsea-based consulting and design firm Delos, had a very personal story about this.

“About a year ago, I had a really sore toe,” he said. “It got all kinds of infected. I don’t know [what happened]. I took a photo from my iPhone, emailed it to my doctor and she did a diagnostics [test] and sent it to me. It took like 10 seconds for her to treat me and do it. We are way more sophisticated [these days].”

So while people may not need to physically visit a hospital as much thanks to technology, medical institutions can make use of the data to help them take care of themselves.

“I think it’s data-driven design,” said panelist David Lewis, a principal at United Kingdom-based architecture firm NBBJ Design. “We are starting to think more about Fitbits and iPhones. What I can see in the future is we make much more efficient hospitals based on data, like how people use those hospitals in a better way. And I also feel that the hospitals should talk more around wellness and not treating people’s illnesses so that the would be less people going to hospitals.”

Hospitals and other organizations have been making bank with their smaller urgent-care facilities, where people can get access to a doctor for more minor ailments on a walk-in basis. And in some states around the country, like Texas and Ohio, there has been a trend of erecting more freestanding emergency facilities. These types of centers allow more people to get the access that they need quickly. (In 2014’s, Manhattan’s first freestanding ER, Lenox Health Greenwich Village opened.)

“[These are] so you can go down the street instead of having to go to a hospital all the way across town and for something that is less acute,” said Luke Savage, the director of European operations and acquisitions at Alabama-based real estate investment trust Medical Properties Trust. “That might be the first stop for a heart attack. So the benefit is for efficiency in time and in location.”

There is no indication that this trend is going to slow down either.

“Up to 60 percent of people in the U.S., 50 percent in Germany and 40 [percent] in the U.K. are willing to accept services from different formats,” Muldavin said. “And now we have mobile health and acute health facilities in retail malls.”

He then asked the panel a grim question: “Why are you so confident in the hospital business? I would think that it’s actually a dying business.”

Hospitals are still necessary, of course. Savage was quick to point out that traditional large-scale campuses are in fact treating more patients.

“So those people are accessing those services and diagnosis more than they used to and then that’s producing inpatients more than it used to,” Savage said. “Because people are winding up living longer and going to the hospital more than not finding out they have cancer and then it’s too late.”

But with hospitals and medical centers opening more of these smaller-format treatment centers, what is to happen to hospitals with large campuses? Mauldvin thinks they could be revolutionized with tenants, as in actual leases with companies and retailers.

“I think hospitals are going to have to radically change,” he told Commercial Observer after the event. “Imagine you are a hospital and you have all of this excess land. You could do a more private-public investment and capitalize rather than selling something you don’t need. And you can have an asset that could fund your oncology center for the next 50 years.”