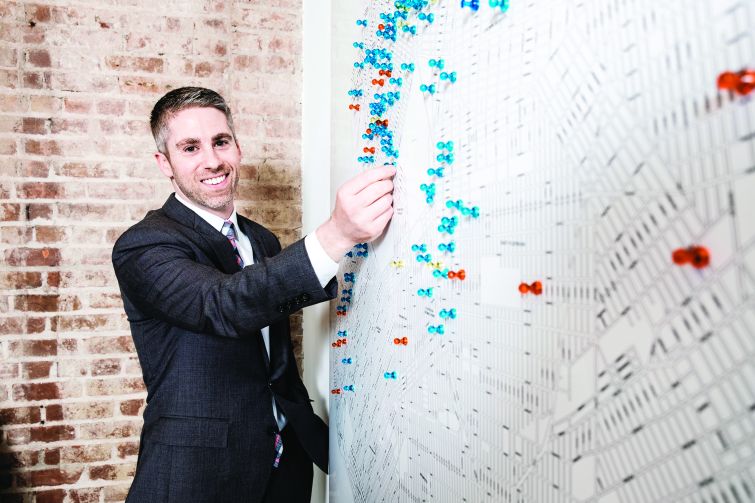 Fresh off the plane seven years ago and hell-bent on working in New York commercial real estate, the then 30-year-old Marks had a list of 20 of New York’s industry titans in his pocket. But he didn’t actually know who they were at the time.

“I met with some really powerful people,” Marks said. “But when you come to a new market you can’t appreciate who these people are. Looking back on it, the fact that I was put in touch with Jeff Cushman [executive managing director at Cushman & Wakefield], Jon Caplan [vice chairman at JLL Capital Markets], Rob Speyer [president and chief executive officer of Tishman Speyer] plus senior executives at big-name companies like Transwestern, Blackstone, Petrus Partners, ING and Shorenstein was very lucky.”

Peter Savoie, chief investment officer at Miller Global Properties and a former real estate broker who had lectured Marks’ class at the University of Colorado where he was getting his MBA, had opened his Rolodex for the eager young buck looking to make his move from Boulder, Colo. to New York City. And the big-wigs that Marks met with graciously encouraged him, for the most part at least.

“I won’t mention his name or company but he basically sat me down, looked at my resume and said, ‘Dan Marks from Glenview, Ill.—pardon my language—who the fuck is Dan Marks from Glenview, Ill.? If I have to choose between you and the stack of resumes that I have from Columbia Business School, Kellogg Real Estate and Wharton School of the University of Pennsylvania I can’t justify that hire—so, good luck.’”

Ultimately, it wasn’t any of the Manhattan-based firms that Marks met with that would snag him, because it wasn’t Manhattan that was calling. It was Brooklyn.

Marks joined Brooklyn-focused brokerage TerraCRG in 2011, made partner in June last year and has been instrumental in the growth of the 10-year-old company.

“This is someone who didn’t grow up in New York City and didn’t know Brooklyn when he moved here, but he very quickly became a market expert,” said Ofer Cohen, the chief executive officer at TerraCRG.

It helps that he’s pretty fond of the borough, also. “What’s not to love about Brooklyn?!” Marks said. “I love the people, the places, the diversity, the art culture, the history, the architecture, the neighborhoods, the food, the energy, the list goes on and on.”

Today, Marks lives, sleeps and breathes the borough. He currently resides in Downtown Brooklyn with his wife, Jelena, and their one-year-old son, Luka, and walks to TerraCRG’s office at 634 Dean Street between Carlton and Vanderbilt Avenues daily.

“I felt that both TerraCRG and Brooklyn were in a good position, strategically speaking,” Marks said. “I knew what my limitations were. I knew I didn’t have the market knowledge but I thought this platform would help me learn it. I packed up my car, sold my condo in Boulder, furnished—I just left everything there—and I landed in Brooklyn.”

Back when he was still a rube, Marks had to work hard and fast to correct his lack of market knowledge and make business contacts. “It was intimidating, but I felt because this company had such a singular focus on one borough it was manageable and bite-sized,” he said. “I could commit to learning that one market. I guess I didn’t realize how hard that would be right off the bat, how big Brooklyn is, and how competitive this market is.”

According to TerraCRG’s data, Brooklyn was a $1 billion market in 2010. Marks was hired a year later as TerraCRG’s industrial expert, and the first couple of years were no walk in the (Prospect) park. But he came at a fecund moment; by 2015 it would be an $8 billion market.

Like many other brokers who are hungry, Marks worked 7 a.m. to 9 p.m. for the first couple of years. When he wasn’t out visiting properties or calling owners, he was researching neighborhoods or running numbers. “I felt I owed it to these people to know what I was talking about. We’re doing deals from $1 million to $85 million and each deal deserves a level of attention and respect.”

For Marks, momentum began to build when he bagged a $21.5 million industrial deal in 2012. “I had been going after some small warehouses in East New York, and then we had a 200,000-square-foot transaction at 75 19th Street in Sunset Park [Marks represented the seller, Hudson Realty Capital, who sold the property to CWN Property Management]. At the time it was the firm’s largest transaction and our first entry into this larger, industrial world,” he said.

The timing was particularly interesting. At the same time another 200,000-square-foot warehouse property at 29 Ryerson Street, across from the Brooklyn Navy Yard, was being snapped up by investor Chaim Miller (the building is now owned by Madison Realty Capital and an office conversion underway). Marks was not involved in the deal, but the contemporaneous sale of the two warehouses demonstrated, Marks said, the beginning of a transition from industrial to creative users in Brooklyn’s office market.

“It was the very beginning of the Brooklyn trajectory, or at least the beginning of the current cycle, and Dan had this interest and passion for industrial properties,” Cohen recalls. “It was an area that we wanted to get even deeper into because there was a huge opportunity for industrial complexes in Brooklyn to become office spaces. It was a match made in heaven; the perfect guy at the right time, in the right place.”

Marks credits local developers with first noticing this opportunity happening organically in small pockets across the borough. “You saw buildings like the American Can Factory on Third Avenue in Gowanus [a 130,000-square-foot, six-building manufacturing and arts complex, developed by XO Projects],” Marks said, “you saw the tremendous number of buildings that the Walentas family did in Dumbo, converting old industrial buildings into offices.” Those projects proved the success of the smaller-office model that was later repeated in Williamsburg and East Bushwick, with larger developers seeing the opportunity to convert these buildings in the hopes of attracting larger footprint tenants.

At the time, LIVWRK perhaps pioneered this vision with its acquisition of Dumbo Heights, a 1.3-million-square-foot, six-building warehouse complex located in Dumbo. LIVWRK purchased the property in 2013 in partnership with Invesco, Kushner Companies and RFR Realty in a transaction that Marks calls “a wake-up call for the entire market.”

“I can’t really put my finger on a deal that changed the market, that one defining deal, but I think that 160 Van Brunt was an important time in the market. The way we positioned that property and the overwhelming response for over the asking price. We all just sort of looked at each other and said, ‘Okay. This is a real asset class that is about to explode.’”

“Dan was representing the family that owned 160 Van Brunt,” said Asher Abehsera, chief executive office at LIVWRK of the transaction. “I connected with him and had a tour the same day. I made him an offer at the end of the tour,” he said. “He was very diligent, polished, honest and we enjoyed doing business with him. It’s refreshing to work with someone like Dan in this city—somebody who understands the streetscape and the nuances to do with buildings and legacy owners and some of the complexities there but someone who is also a person of integrity. He’s very methodical and brings an elegant flair to a transaction.”

“These are not the names and types of companies that you’d expect to be in Brooklyn five years ago. Before, it was more a locally-dominated investment market—local developers and smaller-scale neighborhood property investors.”

And Marks has seen the value in certain neighborhoods change rapidly. “Brooklyn as a whole is reinventing itself all the time, and it happens faster than you’d think,” he said. The evolution of the borough is a testament to the fact that a lot of people are on board with the changes, and he believes the borough is still very early on in its transformation.

As for specific neighborhoods to watch, Marks is a big believer in Gowanus (despite the three-eyed fish that was pulled out of the canal in true Simpsons style in 2015).

“It’s always been my favorite enclave within Brooklyn,” he said. “It’s very unique in that it’s sandwiched between some of the most interesting, highest-priced beautiful brownstone neighborhoods here, it’s primarily commercially zoned and there’s some extremely toxic water running through the middle of it.”

One of the transactions he is most proud of in Gowanus is getting ice cream purveyor Ample Hills into 305 Nevins Street. “A husband and wife came to us and said, ‘Hey, we have this great building and we don’t know what to do with it.’ It was an old iron shop; they were retiring and needed the income. We put it up for lease and got a lot of interest in it, and then put Ample Hills in a neighborhood that was just beginning to pop. When a mom-and-pop really cool brand wants to open in this neighborhood in a former iron works something is happening.”

The commercial site that TerraCRG is currently marketing at 545 Sackett Street is one block away. “The challenge that this neighborhood has is the looming rezoning that everyone talks about,” Marks said. “It has paralyzed that market because people are afraid to sell because they don’t want to leave value on the table by selling too soon. Buyers don’t want to speculate because they don’t know what’s going to happen when it gets rezoned. That’s why you don’t see too much happening right now but someday very soon things will start to change.”

Marks has watched the transformation so closely, that many of the names associated with Brooklyn now view the student as the teacher. In 2015 he represented Normandy Real Estate Partners, Royalton Capital and Sciame Development in the trio’s $27 million acquisition of 333 Johnson Avenue in Bushwick—a 160,000-square-foot property that previously was the site of a slaughterhouse. At the time, Heritage Equity Partners’ Toby Moskovits was figuring out areas to buy into and called Marks and he took her and her colleague around Bushwick (she wound up purchasing 215 Moore Street.)

So, maybe, the next time some green kid from the Windy City is looking for contacts of the big shots in the New York it’ll be Marks’ business card he gets, if reputation is anything to go by.

“Dan and TerraCRG are our go-to guys,” said Boaz Gilad from Bedford Stuyvesant-based development firm Brookland Capital, who worked with Marks on the acquisition of 550 Fourth Avenue in Sunset Park. “Dan is very knowledgeable about the Brooklyn market and bottom line, he’s a really nice guy. New York real estate is kind of rough. It’s an extreme experience of the New Yorker. But Dan is one of these guys that I feel comfortable with calling up and saying, ‘Look at this deal, what is the price that you see there?’ and I’ll get a straight answer.”