The Fantastic Four: How ACORE Has Become a Dominant Bridge Lending Force 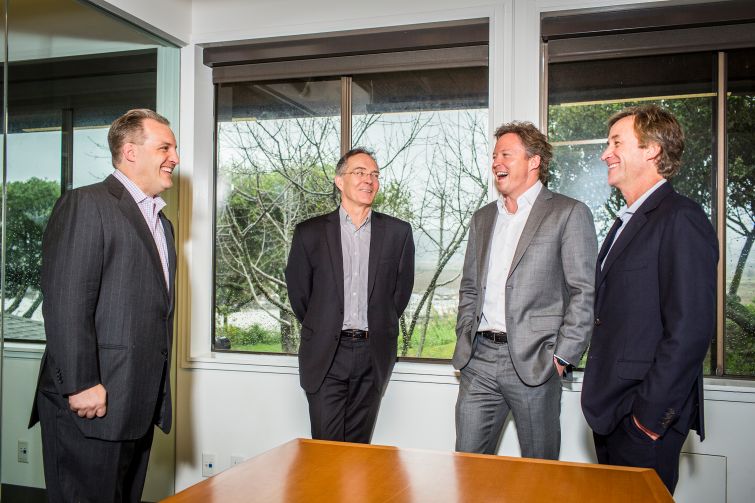 “About 20 years ago, Boyd [Fellows] and I figured out that if we wanted to partner up on a future venture, we would have to find some hardworking kids who would want to work harder than we would,” Stew Ward joked to Commercial Observer over the phone late last month.

In the early 1990s, Fellows and Ward were working in Nomura Securities’ commercial real estate lending practice, where they met Warren de Haan and Chris Tokarski. And nearly 20 years later, the four have gone on to build and run some of the biggest-name debt platforms in commercial real estate, from Countrywide Commercial (a subsidiary of Countrywide Financial) to Starwood Property Trust. In May 2015, the partners went on to co-found ACORE Capital, with an initial backing of $1.6 billion from Tokio Marine Group subsidiary Delphi Financial Group, and in 2016 the company originated roughly $5 billion in debt across 70 deals—all large, floating-rate bridge loans on transitional assets.

In the last 21 months alone, ACORE has become a dominant force in the bridge lending world. According to previous reporting from CO, last year ACORE outperformed competitors like Starwood Property Trust’s large loan lending platform, which provided roughly $4 billion in deals, and Mesa West, which did about $2.5 billion.

“I don’t think there are 10 lenders out there for each deal,” said Jeff Worthe, a principal at Worthe Real Estate Group. “I don’t know 10 lenders that well that I can trust. Relationship lending is critical for us. If [ACORE] says they’re going to follow through on a deal, we know they’re going to do it.”

“We have to worry about trying to buy a property, or leasing up a building, or doing construction. Everything is a moving part,” he said. “It’s about getting a lender who gives us the authority to make decisions, knows what our needs are and how to address them.”

Since launching the firm, de Haan, Fellows, Tokarski and Ward have amassed a team of 58 people across the country, including 22 originators, 15 employees focused on credit and asset management and 17 staffers who work on operations and capital markets. Additionally, ACORE’s four founders—who are all based in California but come to New York often—have invested in the creation of a small technology company that has built custom software for the shop.

“Partnerships can be really powerful, and for me the two critical components of a great partnership are mutual trust and mutual respect,” Fellows told CO during an interview in ACORE’s Manhattan office last month. “That is leveraged by the fact that each of the four of us is very different in our skill sets. We each understand what the other three guys do, but each of us is really, really exceptional at the components of the business we each oversee.”

Fellows, 56, and Ward, 59, both have nearly 30-year careers in structured finance and the two oversee the liabilities side of the business—the former concentrating on capital raising and marketing, and the latter heading up technology and operations. De Haan and Tokarski are focused more on real estate. De Haan, 44—who graduated from the Hotel Institute in Montreux, Switzerland and attended the Cornell University School of Hotel Administration for real estate and finance—primarily works on sourcing transactions, talking to clients and is in charge of ACORE’s origination team. Tokarski, 46, is the firm’s credit expert and oversees underwriting and asset management.

And ACORE isn’t the quartet’s first hand at building a lending platform. After the Russian financial crisis in the summer of 1998, Nomura shuttered its CRE lending shop. The four started and ran an advisory firm called Coastal Capital—which Fellows told CO was essentially “the old roots of ACORE”—until Countrywide Financial hired them to start up its CRE subsidiary, Countrywide Commercial, in 2004.

The group’s “claim to fame” came after the global financial crisis in 2007, when the commercial mortgage-backed securities market temporarily shut down.

“The combination of Chris Tokarski’s credit discipline and Stew Ward’s sophisticated risk-hedging methodologies enabled [Countrywide Commercial] to remain very profitable in both 2007 and through Bank of America’s acquisition of Countrywide in 2008,” Fellows said. “The vast majority, if not all other CMBS shops of our scale, lost billions of dollars, while we made money. It was a really watershed moment in our careers.”

Following Bank of America’s purchase of the platform, the four men picked up where they left off with Coastal Capital and bought distressed loans until they joined Barry Sternlicht’s Starwood Property Trust. In 2009, Sternlicht (who was unavailable for comment) had launched the commercial real estate real estate investment trust and had raised nearly $1 billion in its initial public offering. To say the least, the stars aligned, and Sternlicht brought on de Haan, Fellows, Tokarski and Ward to run the show the following year.

Over their 20 years together, de Haan, Fellows, Tokarski and Ward have built up a client base that de Haan said has made ACORE as successful as it has been in the last 21 months.

“The borrowing community and brokers were our biggest cheerleaders,” de Haan said. “It was unbelievably rewarding to watch the number of deals where people came to us and said, ‘You’ve backed us for the last 20 years on deals we’ve done. Let’s help you build ACORE.’ ”

And according to the borrowers and brokers that CO spoke to, that seems to be the case.

“[Without] the brokerage community and borrowers, there is no chance [ACORE] could have reached success as quickly as they have,” said Trey Morsbach, a senior managing director and co-head of HFF’s Dallas office.

Last year, HFF, a national brokerage, negotiated more than $40 billion in debt and “did a lot with ACORE,” Morsbach said, and within the nonbank, bridge lending space, HFF worked with about 20 lenders and did the most business with ACORE.

Morsbach said that of course when presenting a client with a deal from a new firm, brand and reputation matter, so when clients are reminded of ACORE’s leadership, it resonates with them.

“Among a handful of people we would think are best practitioners in the bridge space, ACORE has a senior established team that does what they say they’re going to do. They’re flexible, creative and can price at market. They really haven’t been around  for very long and have had extensive success from a volume perspective,” Morsbach said. “It’s an experienced team. The name is new, but the execution is not.”

Jonathan Epstein, a partner at GreenOak Real Estate, has known Fellows from his days at Nomura and met the other three founders of ACORE from their consulting days at Coastal Capital. When GreenOak began a major renovation of Hotel Figueroa in Los Angeles, ACORE was Epstein’s first call.

“I immediately called Warren,” Epstein said. “He has a lot of hotel expertise, and I knew he had that interest level in the project, and would understand where we were going with design and concept.”

ACORE provided Epstein’s company with an $85 million loan to remodel the existing hotel, which was built in 1935 and had only seen $2 million in improvements since the 1970s, he said.

“When we built the model rooms, the entire team at ACORE here in L.A. came over,” he said. “While we had several hundred people go through and do consumer research, it was rare to have a lender come in and give their thoughts. But we wanted their views and we worked together pretty collaboratively.”

But ACORE won’t lend on just any deal: Fellows said that out of every 20 deals that crosses their desks, they will likely only lend on one. And Tokarski said that each deal has to fit what he refers to as the “three B’s”: the basis of a deal, the borrower’s experience and the borrower’s business plan.

As far as structure goes, Tokarski said that ACORE is a one-stop shop and will oftentimes bifurcate a loan into a first mortgage and a mezzanine piece. It makes the transaction more liquid and would allow ACORE to either borrow against or sell the A note if it wanted.

De Haan noted that their deals are “very well insulated” with generally 35 percent of equity ahead of their financing.

“As we get deeper into the cycle, we have to be more thoughtful about markets, borrowers, business plans, to make sure we’re safe,” he said. “Borrowers in 2006 and 2007 were at 80 to 85 percent leverage. Today, they’re at 65 percent. The borrowing community remembers what happened in 2008 very well, so they’re looking for more flexible solutions and balance-sheet lenders who are creative and predominantly one-stop shops.”

As far as the economic climate today, de Haan said that there are “more questions than there are answers and we have to see how [President Donald Trump’s] fiscal as well social policies play out.”

Higher interest rates benefit lenders like ACORE, and investment in infrastructure will drive jobs and benefit real estate, which could lead to greater prosperity, de Haan said. But at the same time, geopolitical risk is something to watch for, because “[Trump] could tweet and send the markets into a spiral.” Tax reform remains unclear, as does the president’s plans to deregulate the financial markets.

“At margin, he might be able to deregulate [to an extent], but I’m not sure he’ll be able to go as deep as he wants to,” said de Haan. “I think a lot of the big banks were really hurt in the last down cycle and will self-regulate.”

Internally, Tokarski said that he hopes the firm will be able to broaden its lending platform and bring more lending products to their borrowers.

And so far, the partnership between de Haan, Fellows, Tokarski and Ward is a huge component of their success.

“This pure partnership has befuddled and beguiled a lot of the employers we had,” Ward said. “At Countrywide they loved us, but hated the fact that we were a four-headed monster. Barry [Sternlicht] didn’t like it either. But in the end, we operate as a partnership, do everything jointly and split the money. It makes it difficult to divide any of us, and it also makes us agnostic about what we do.”