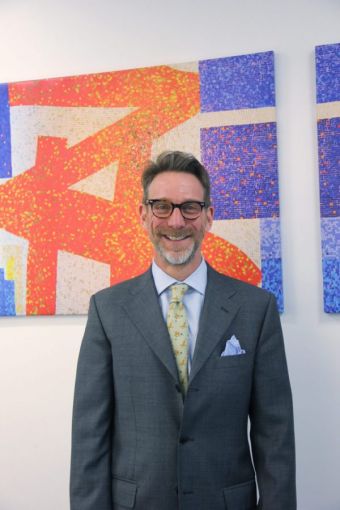 Marc Warren is a busy man. A principal at Ackman-Ziff, Warren executes debt, equity and investment sales transactions for the brokerage and heads up the firm’s loan sale advisory and lender finance practices. Over the course of his 30-year career he has held positions at Credit Suisse, UBS and Heller Financial, providing him with the ability to view transactions from the perspective of the buy side. Warren sat with Commercial Observer at Ackman-Ziff’s offices at 711 Third Avenue between East 44th and East 45th Streets earlier this month and discussed the trends he’s seeing in the industry and which capital sources he’s working most closely with today.

Commercial Observer: How did you get into the industry?

Warren: By complete accident and through a series of chance meetings. I grew up in Omaha, Neb., and received a scholarship to the University of Wisconsin-Madison. I decided that I wanted nice things, and the way to get nice things was to go to business school—although I wasn’t sure which area of business I wanted to study. I met James Graaskamp, a professor and the creator of the real estate business school [at UW-Madison]. He helped me get some internships over the summer. I learned a lot and had multiple job offers when it was time to graduate. I ended up going to Heller Financial in Chicago just as the Savings and Loan Crisis was ending and there were opportunities again.

That’s lucky. And then you joined Credit Suisse?

Yes. My experience at Heller was as an investor and loan workout person. From there I went to Credit Suisse First Boston and I moved from the investment banking side [of the firm] to the capital markets side—which included commercial mortgage-backed securities, debt and equity.

I met Brian Harris [now the founder and the chief executive office at Ladder Capital] during that time, and in 2000 he, Peter Smith, a couple of traders and I started the real estate business at UBS. After UBS, I started a couple of real estate investment trusts [Black Creek Capital and Dividend Capital Total Realty Trust] in the nontraded world, and then, on my own, I was also arranging debt and equity.

How did the move to Ackman-Ziff in 2012 come about?

To be on the advisory side was a pretty straightforward move because that was my training. It’s hard to give advice to somebody—whether it’s about debt, equity or investment sales—if you’ve never done it before. So being a participant on the lending side was very helpful in understanding how a deal is viewed.

Yes. Simon and I have similar backgrounds—we’re small-town boys that moved to New York around the same time in the late 1980s, lived in the same neighborhood, socialized together and did business together.

How has the industry changed since you joined the firm?

It’s gotten more complicated, and especially for construction loans, it’s harder to find capital than it was. Maybe not compared with 2012, as things were just loosening up, but certainly versus 2014. There are also more parties now in every transaction than ever before. Doing single-stop-shop deals with a single investor or lender was far more common before. Now, we’re seeing banks take on less risk, so there is a need for preferred equity, mezzanine debt or for more equity [from the borrower].

Which construction deals are being done right now?

Every market and property is different. Multifamily is probably the least difficult asset to get financing for today. Multifamily rental has a lot of headline risk—every day you read that there is too much free rent and too many deliveries so investors are taking a bit of a step back in some cases. Office construction is more or less “by appointment” and in every market with a sizable building you need a massive amount of equity, a lead tenant or both. Industrial is a very attractive market. We don’t do a lot in our firm—we’ve begun to but the transaction sizes are so small that if our average deal size is $60 million to $70 million you need to do a lot of deals to get to those levels. Condominiums and hotels are the toughest to finance. We manage to get them done, but we look extra hard at those.

Are you seeing more deals occurring in the outer boroughs?

For sure. We’ve been very active in the outer boroughs—Queens and Brooklyn mainly. I have teenagers in college and high school, and the joke with our kids is, “I’m going to live on the Upper East Side to save up to move to Brooklyn.” My wife and I find ourselves in Williamsburg on the weekends—we take our dogs [two golden retrievers] and hang out there instead of Soho or the West Side of Manhattan. It’s just as easy to go there but way more interesting and fun.

We’re seeing rents go up tremendously in Williamsburg. The [rental] transactions I did five years ago at $50 to $60 per square foot are easily pushing $80. Long Island City rents are also 20 percent higher than what they were underwritten to a year or two before. New office leases are getting signed in Brooklyn and Long Island City at very high rents historically but at a giant discount to Manhattan.

What capital sources are you working most closely with?

We still do a lot of deals with banks and insurance companies. The banks are still super important but less than they’ve been [in the past] because of the regulatory constraints that limit them, particularly on construction. So we’ve transacted more frequently with debt funds, mortgage real estate investment trusts and individuals.

We’re doing two interesting transactions right now. One is a condominium construction deal in New York City with a premier developer and at a premier site. I would have expected the debt to be from a nonbank, but in this case it’s from two families, one American and one international.

The second transaction involves high-end apartments with a retail component in a quality, supply-constrained location outside of New York City. A private equity fund that is a client of ours is going to make a loan to our other client and they’ve asked us to get senior financing for two-thirds of their investment to give them equity-like returns [on their portion]. That’s an example of a fund that is a builder of apartments and a co-investor with other developers of apartments. In this instance they have decided that the debt may have a better risk-return than the equity.

The nonbank side seems very crowded.

Yes, definitely. There are more [nonbank lenders], and I can think of three institutional funds that have created debt funds just recently. It’s the 80/20 rule—80 percent of the money is raised by 20 percent of the funds. On the equity side it’s also broadened in terms of the capital sources.

How will lenders’ participation change if President Donald Trump rolls back the Dodd-Frank Wall Street Reform and Consumer Protection Act?

I personally short banks getting aggressively into specialty construction financing—only the best banks can do it and it’s a very risky business. No matter what our new president says about regulation I really don’t think that rolling back Dodd-Frank makes sense. It’s maybe against my interests to have these rules in effect as a transactor and partner at Ackman-Ziff, but from a public policy perspective I think regulation is a good idea.

In terms of regulation, I think we’ll see more change to Fannie Mae and Freddie Mac with the new administration than anything else. It seems to me that [U.S. Treasury Secretary] Steven Mnuchin really understands housing finance. He wants to shore up the balance sheets of Freddie Mac and Fannie Mae and make them fortress-like, in terms of their low-risk nature, and then spin them off to the shareholders and make them operate more like utilities. That to me is a really good solution and that will keep our mortgage market for multifamily, as well as for single family, balanced.

What are your thoughts on risk retention?

I and a lot of other players in the business were concerned that spreads would widen significantly, but the opposite has actually happened. Maybe it’s supply-demand, maybe it’s the time of the year when investors are buying bonds, but bonds have rallied both the top of the capital stack, triple-As, down to the bottom of the capital stack, the BBB- have all come in significantly from last year also and so it seems like investors are appreciative of the securitizers eating their own cooking.

With the retail sector languishing, is “mall” a dirty word?

The best 50 malls in the country that reach $700 or $800 per square foot [in retail sales] are unbelievable. They’re owned by the top real estate investment trusts and big institutional investors, and they aren’t going anywhere—those are the fortress-like malls. So, the best malls in the best markets are going to do well but things are changing; if you’re not an A mall, you’re in big trouble. If you’re in a secondary market, if you’re the third mall in a two-mall city, you’re dead. It’s like an old drive-through movie theater—it has no purpose. And, obviously the closures of major stores like Macy’s or Sears is very problematic, and those transactions are very hard to finance. Also, if you look at the recovery, some of those borrowers are terrific REIT sponsors, but if they own a B or C mall, they may have borrowed $100 million at the top of the market, and today the recoveries are among the lowest that you’ll ever see.

Have you had a busy start to the year?

Right now the firm’s activity and my personal activity are about as high as they’ve ever been, which is why my beard went from red to grey to white over the last few years and I’m always tired. Our flow is high and we have to be extremely careful selecting the transactions we work on. We continue to get involved in large, complex construction transactions because our clients need them. They take longer than they used to and involve more capital sources than they did before and it’s only the best ones that get done. But they do get done. If we take them on we believe in them.