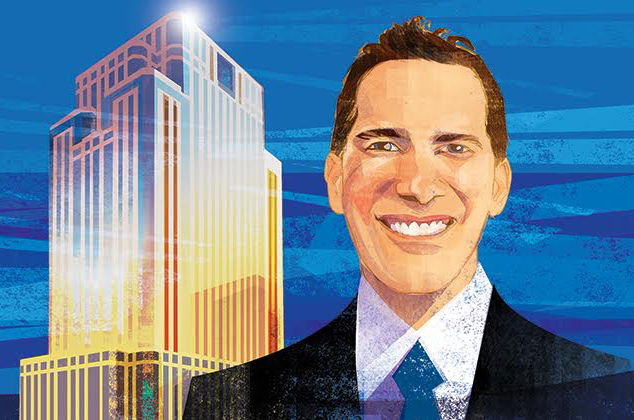 When an office building owner in New Orleans saw their $50 million refinancing efforts derailed by an undervalued appraisal, they turned to Drew Anderman and his team at Meridian, knowing they had the expertise in finding a solution to the problem and obtain the required proceeds.

The Meridian Advantage: Covering All Bases

Anderman – a 20-year veteran of real estate finance, including time at Walker & Dunlop, Deutsche Bank, Credit Suisse, and CIBC World Markets is responsible for over $20 billion in commercial financing throughout his career – joined the firm four years ago to help grow the commercial side, and reinforce Meridian’s position as one of the strongest firms for deals of great size and complexity.

Meridian closed $35 billion in financing across the nation in 2016, which makes them America’s most active debt broker.

Anderman’s success is based on deep knowledge and extensive research, ensuring he understands the myriad complexities of any deal.

“There are seven of us on the team, and given the number of deals we’re working on, our best approach is to divide and conquer,” he says. “We have a local bank expert, as well as members on our team, who have strong backgrounds and are well-versed in development and appraisal. We have a well-oiled machine – a diverse team with a variety of backgrounds and areas of specialization. We have all the bases covered.”

The Barriers to Refinancing: Undervaluation and Tenants on the Move

Previous attempts at securing the loan proved unsuccessful after the owner received an undervalued appraisal on the building.

“The owner worked directly with a lender prior to our involvement,” says Anderman. “Unfortunately, an appraisal was done that grossly undervalued the building, and didn’t allow the lender to provide the proceeds the sponsor needed.”

The appraisal in question determined the building’s value at $47 million. After examining it, Anderman felt it contained “glaring mistakes.”

“The value per square foot was so grossly low compared to other local deals that it just didn’t make sense. That was our first gut check. After we spent time in the market looking at other deals and speaking to appraisers, it re-affirmed that the first appraisal, for whatever reason, completely understated the value of the asset.”

The effort to secure the loan had several other obstacles as well. The building had a significant number of tenants in the energy sector, and with energy prices coming down, this was a big concern. Additionally, one law firm tenant had recently vacated, and another was facing renewal and exploring alternative options.

Anderman was confident, despite these obstacles, that he could secure a more accurate appraisal that would provide the full $50 million loan.

The Road to $50M: Research and Revaluation

Hired in April 2016, Anderman and his team spent a month performing in-depth research on the New Orleans office building market, thoroughly examining recent sales and leases and talking to leasing brokers and appraisers to get their sense of preliminary value for the building. All the while, they methodically built their case for the proper valuation.

With the information in place, Anderman and his team met with lenders including insurance companies, banks, and those in the CMBS market.

“We knew that many lenders would be attracted to the sponsor because the sponsor owns millions of square feet of office buildings around the country, and it could potentially be a new relationship for the lender with ongoing deal flow,” says Anderman. “The sponsor also owned a number of other office buildings in New Orleans, so they had very hands-on experience in management in this market. We felt confident there would be a strong reception to doing business with this sponsor and this building.”

Meridian quickly narrowed the search to five CMBS lenders, who were willing to provide the required financing. In the end, Meridian arranged a $50 million, 10-year fixed-rate loan for the sponsor from a global asset management firm. And Anderman’s instincts on the undervaluation proved correct, as the new appraisal, taking Meridian’s research into account, valued the building at $65 million – an $18 million difference from the initial appraisal.

The transaction was a perfect example of how Meridian’s vast experience helped a client overcome what for many would have been insurmountable obstacles.

“At Meridian, we’re very good at solving problems,” says Anderman. “After obtaining a more realistic appraisal, we used our substantial sales and marketing ability to generate interest in the lending community for this deal, demonstrating to lenders that it was not only a good deal, but a possible opportunity to do business with a very strong, substantial sponsor on an ongoing basis.”