Data Guys: A Michael Slattery-Led Team Is Supplying the Lifeblood to the Real Estate Biz 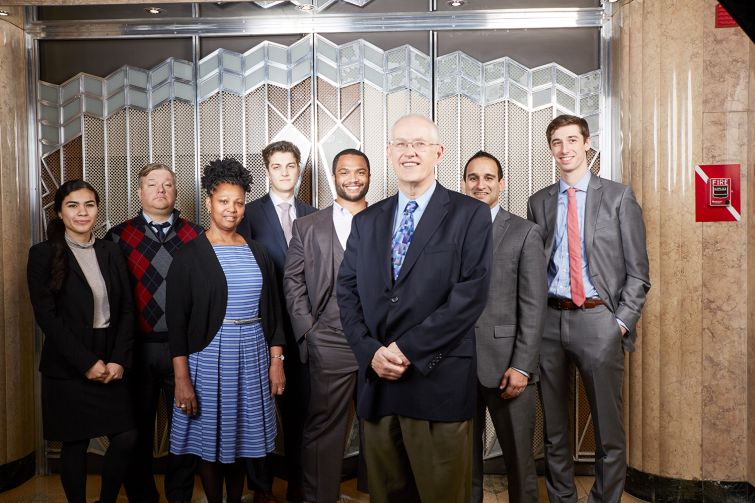 If you’re looking for real estate figures in New York for anything from condominium unit sales in Flushing to how retail rents are holding up in Midtown South, the Real Estate Board of New York’s data division has you covered.

Led by Michael Slattery, its senior vice president for research, REBNY produces comprehensive reports many in New York’s real estate sector have come to rely on for accurate and up-to-date figures on real estate in New York City—the essentials that nearly every broker in the city winds up using daily.

Slattery has been at REBNY since 1986 and part of its research department since three years later.

At the time, someone like Slattery had few of the resources he enjoys today. “There was very little information publicly available,” he said. “So a lot of [research] was rough data collection. It was slow and time consuming.”

Slattery obtained his data at the time through sources including REDI, a sales information directory, and the Record and Guide, which provided weekly reports on mortgage activity, in addition to some tracking of new construction himself. The data was useful, but far less expansive than what’s available now, and it went this way more or less for several decades, Slattery said, until around 2008, when New York City greatly expanded the amount of real estate data it would release.

“The city made available sales information that included not just condos and other properties but co-op info. That was a real turning point in being able to provide market information in the residential area,” Slattery said during a recent interview. “Before that, co-op sales were not available. They were protected by tax secrecy.”

As the city began working to release even more detailed data, Slattery and his team began breaking it down by borough and neighborhood. Having this sort of information available electronically—including through ACRIS, the city’s Automated City Register Information System, which includes property records from 1966 through the present—in addition to statistics from brokers, paved the way for all sorts of different analyses and groupings.

“The city created ZoLa, zoning and land use information, and PLUTO, where they mapped a lot of their information about zoning, landmark issues and historic districts,” Slattery said. “Having that electronically available really opened the door to be able to do a wide range of things, not just simply reporting on sales information, but looking to count the number of properties designated in historic districts. That enabled us to overlay that with permanent information on where activity was taking place.”

Slattery obtains data from REBNY’s member brokers, plus various city agencies including the New York City Departments of Buildings, Department of City Planning and Department of Finance, plus the mayor’s Office of Data Analytics, and the NYC Open Data portal, a public resource where the city posts various data sets. The agencies, in turn, compile their data from a variety of sources, including building permits and tax information.

With so much data available, Slattery has to decide which information is report-worthy, a process that also takes into account REBNY’s advocacy of various issues like landmarking and 421a.

“We have been an important supporter of housing production,” Slattery said of REBNY’s 421a advocacy. “Land construction costs and taxes are so high there needs to be an exemption on property taxes to make residential properties feasible. We’ve tried to highlight these issues in terms of their economic necessity.”

“There’s a lot that’s routine, like the residential and investment sales and the retail report,” Slattery said, “and then we look at, what issues are coming up for renewal? Certainly 421a was one. Economic incentives are coming up for renewal also, so it’s likely we’ll start to look at some of that information if we can get enough of it from the city. We’re trying to track what topics are coming up legislatively, then looking to see what we can do to show the merits of the various programs and their value to the city in advance of their renewal date.”

Given the wealth of data at REBNY’s disposal, Slattery and his team are able to dive deep to offer essential perspectives on New York’s real estate market.

“These reports are very important for firms that don’t have their own retail research departments,” said Richard Persichetti, the regional director of tri-state and northeast research for Cushman & Wakefield, who has made use of REBNY’s retail reports for 17 years. “They really put the retail market in perspective from a trends standpoint, highlighting market trends around the New York City retail market. I’ve always found it to be useful.”

“There was data someone else assembled that was publicly available about rent regulation, in terms of where rent-regulated properties were,” Slattery explained. “Overlaying that information on the landmark information we had, we were able to show that rent-regulating units were leaving the system more rapidly in historic districts than outside them, which was contrary to what preservationists were saying. The availability of electronic data and the ability to mix and match that has enabled us to advance our capabilities, and also provide more useful information to the industry.”

To assemble its reports, Slattery and his staff receive data from the city agencies on a monthly basis and then start compiling reports at the end of each quarter. First they clean the data, ensuring there are no duplicates, then they sort it by property type, borough and neighborhood, which Slattery said takes them about a week.

The team is modest in number—but strong in skills. It includes Lodhi; Brian Klimas, the vice president and chief economist; Carl Hum and Ryan Baxter, both senior vice president, management services and government affairs; and Max Haight and Sam Levy, both research analysts. Their combined experience allows them to see patterns and trends other real estate pros might miss.

“It makes a difference in knowing where to look for information, and maybe that’s a little bit of my contribution here,” Slattery said, “being around long enough, and having identified sources or locations or maybe even contacts within the city to reach out to see if they have the information available.”

Slattery also emphasized that their reports are not compiled in a vacuum, and in certain cases, they’ll share them with an “informal advisory group” to ensure the accuracy of their interpretation of the data.

“We’re always trying to reach out to our membership, to those who have experience [in certain areas], whether it’s in land use, tax policy issues, things like that, to get feedback from them on those kinds of issues.”

Today, the reports that REBNY makes available every year include four on the residential market, two on investment sales, two each on Manhattan and Brooklyn retail, a broker confidence survey and others as needed, such as overviews of construction safety and landmarks.

The Brooklyn report debuted in fall 2015 and reflects the need for more information about this hot borough.

Slattery takes particular satisfaction from how the reports serve local players, including neighborhood-focused media and local brokers. The latter group doesn’t have the resources to compile its own data.

“The reports serve neighborhood newspapers in many ways,” he said, “and they service smaller brokers, who are our members, in many ways. We’ve tried to take a perspective on data that’s different than large Manhattan brokerage firms, whose focus is co-ops and condos.”

Slattery also noted with pride that one of REBNY’s reports was cited in an amicus brief this year in a case before the Supreme Court, Stahl York Avenue Co. LLC v. City of New York and New York Landmarks Preservation Commission, regarding the relationship between property ownership and due process under the 14th Amendment of the Constitution. In the case, Stahl York Avenue Co. LLC sought relief from the city after two of their buildings on York Avenue between East 64th and 65th Streets, which they had intended to tear down, were designated landmarks by the city. (The court declined to hear the case.)

Whatever their use, Slattery takes pride in REBNY’s reports, knowing he and his team can offer perspectives that make a real difference for the city’s real estate industry.

“The data is important, but you just can’t look at data. It doesn’t tell a story. You need us to make sense of it,” Slattery said. “You have to probe data and ask questions about it. It’s comparing one set of data to something else—landmark information with housing production information, for example—and when you marry them, you see results not evident by just looking at data. By marrying those sources, we’re trying to illuminate public policy issues people might not be mindful of.”