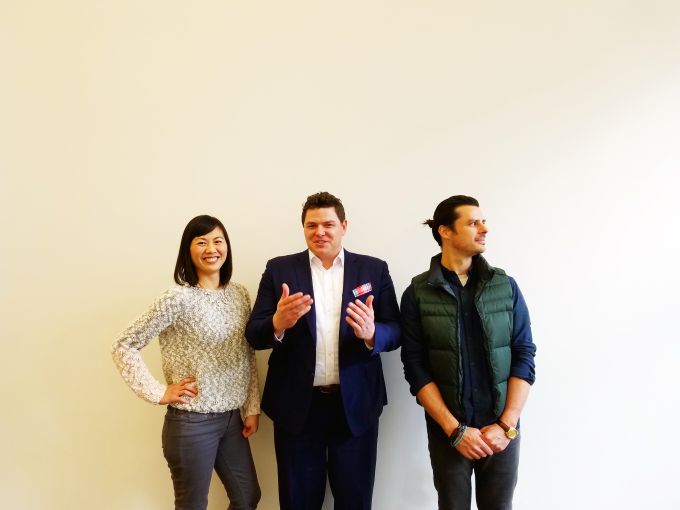 Less than six months since leaving his post as the president of the Downtown Brooklyn Partnership, Tucker Reed is hoping to apply the strategies he used to drive the growth of Brooklyn’s innovation economy to cities and private companies, Commercial Observer has learned. Reed, who has launched a new company Totem, already has an impressive roster of clients in New York City and beyond from United American Land to Rabsky Group to Hello Alfred to Guatemala City.

Totem works on a mix of real estate development projects, as well as ventures with real estate, media and public space tech companies.

Reed’s partners in the Dumbo-based venture are Vivian Liao Korich, who was most recently the chief of staff and managing director of programs and partnership at the Downtown Brooklyn Partnership, and J. Manuel Mansylla, an urban designer with whom Reed consulted while at the partnership.

Tucker brings a wealth of experience in economic development and real estate, and he said that Korich is seasoned in marketing, branding, narrative development and Mansylla’s strengths are architecture, planning and urban design.

“We think those three areas work together really well in terms of 21st century development and community-conscious urban planning,” Reed told CO. “The thing we’re trying to do is take a more holistic approach to these [development-related] questions.” Rather than a visionary having to hire different people to help with development and marketing, etc., Totem provides a one-stop shop.

“I think Tucker’s specialty is rebranding, reinventing, coming up with a vision and that’s what we want to do on Canal Street,” Albert Laboz, a principal at United American Land, told CO. “I know Tucker and I know his company and his team. He’s done great in Downtown Brooklyn.”

Reed spent more than four years at the helm of the Downtown Brooklyn Partnership, where he introduced a slew of policies to spur both residential and commercial development in Brooklyn. Prior, Reed was the director of special projects for Dumbo-based Two Trees Management Company for three years. Reed also worked from 2008 to 2009 as the chief of staff for the Baghdad Provisional Reconstruction Team in Iraq.

Totem has become a partner in Rabsky Group’s 625 Fulton Street in Downtown Brooklyn. Rabsky bought the site for $158 million from Forest City Ratner Companies in January 2016, property records indicate. A Rabsky spokesman, who spoke on the condition of not being identified, said the plans are still in flux, but the company is aiming for an office project with a retail component.

“We are very happy to work with Tucker on this project because he knows the Downtown Brooklyn community very well and they know him and he understands their needs,” the Rabsky representative said.

Reed said that Totem is particularly excited about investing in 625 Fulton Street because it is an opportunity to “bring more Class A office space to Brooklyn.”

And this start-up isn’t limited to New York. Totem is consulting with Guatemala City as a result of Mansylla’s long history of working there in urban design.

“In order to help neighborhoods in Guatemala City manage their growth and attract investment, we are exploring the creation of special districts to foster greater collaboration between the public and private sector,” Rossana García, the director of Guatemala City’s City Planning Office and Urbanistica, a non-profit, city-run redevelopment corporation, said in a prepared statement. “Totem’s body of work, especially as it relates to [Business Improvement District] creation and management, makes them a strategic partner to help in this endeavor.”

Totem has also formed partnerships with a series of real estate technology companies. According to Reed, Totem helps these tech companies “understand the needs of the real estate industry and how to best launch their product and make introductions.”

For Hello Alfred, an online concierge service for residents, Totem has helped the company reposition its sales strategy from a direct-to-consumer to business-to-business model and doubled its pipeline of development clients within the three months Totem has been quietly operating.

Marcela Sapone, a co-founder and the chief executive officer of Hello Alfred, said, “They have combined over 20 years of experience in understanding what it takes to bring expensive multi-stake holder developments from a piece of paper to reality and that’s a pretty rare skill set. And they understand from the public, private and city perspective what needs to get done to do things in a expedited way.”

Why the name Totem?

“The name Totem resonates with us on a couple of different levels,” Reed said. “At the most basic, a totem is an object or thing that serves as an emblem or symbol of significance. For us, our ‘totem’ is our shared belief in the promise of cities. Further, we liked a symbol in which the creation of a whole is greater than the simple sum of its parts, which we feel is reflected in the complementary expertise of our founders, the different service offerings we will be specializing in and the need for multi-dimensional thinking in an increasingly complex world about to be further augmented by technology and automation.”