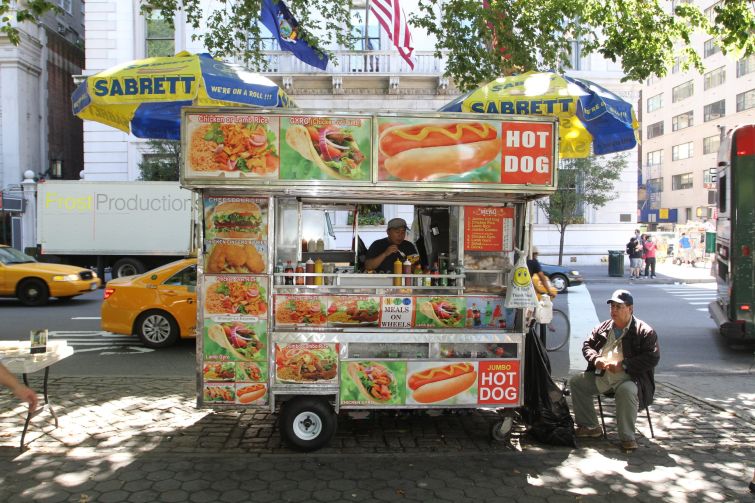 Mobile food cart vendors have been part of the fabric of New York City for more than 100 years.

But since the 1980s, the number of legal permits for a food vending license has been capped, leading to a vast black market for permits selling for as much as $25,000 rather than the $200 for a city-issued one.

The City Council is mulling legislation to double the number of food vendor permits across the five boroughs over a seven-year period starting on March 1, 2018—at a pace of 600 additional licenses per year as well as a one-time issuance of 200 borough-specific ones—while also creating a street vendor advisory board and vendor enforcement. (Under the proposed legislation, the $200 permit fee would increase to $1,000.)

City Council Speaker Melissa Mark-Viverito and other council members are behind the bill, one of a number of proposals that are part of the Street Vending Modernization Act. Other legislation seeks to expand where vendors can sell their food on the sidewalk.

“The number of food vendor permits has been capped since the 80’s,” Mark-Viverito said in prepared remarks. “This legislation will increase opportunities for vendors and reduce the barriers to entry for street vendor entrepreneurs by raising the number of food vending permits while also implementing enforcement mechanisms to ensure that the rules are followed and our public spaces remain safe and vibrant.”

New York City Department of Health and Mental Hygiene has been allowed to issue 5,100 food vendor permits for carts and trucks, according to an agency spokeswoman. That number includes full-term citywide (2,800), temporary/seasonal citywide (1,000), borough-specific (200), full-term disabled veteran/disabled person/veteran (100) and green cart permits (1,000). Any changes to those numbers are subject to legislation by the City Council.

The main bill—the Street Vending Modernization Act—calls for a study of the vending and further permit authorization “on or before Aug. 1, 2024, to conclude on or before March 2025.” That means that hundreds of permits could be doled out long before an assessment is completed. The other bills allow pushcarts to operate within three feet of a curb rather than at the curb and reduce clearance requirements near driveways, subway exits and crosswalks.

The Real Estate Board of New York as well as other groups have taken issue with the legislative package.

“When we looked at the legislation we understood the thought processes behind the proposal, which is to encourage opportunity for immigrants and other entry-level employees to find a little bit of an entrepreneurial window for them. And we support that,” John Banks, the president of REBNY, told Commercial Observer. “Where we run afoul is…the first step should be an analysis of what is going on now in an attempt to address those [problems] before you seek to expand the number of mobile food vendors who will be competing for a limited number of spots. If you increase the number of mobile food vendors citywide, they’re all going to rush to the same corners in Midtown and other business hubs.”

Councilman Mark Levine, the lead sponsor of the bill to expand the availability of food vendor permits, said, “The exorbitant price on the black market shows what kind of pent up demand there is.” He put the number of unlicensed vendors at 10,000, the majority of which are those selling food. The new legislation would work to “try to drain the black market,” Levine said, and would “allow some of the unpermitted vendors to come under the regime.”

He imagines the enforcement unit would be funded by the council and comprised of 100 civilians. The unit could become part of the Department of Health or the New York Police Department.

“Street vendors have been targeted with inconsistent enforcement and shaken down by unscrupulous permit holders who currently control access to the limited pool of vending permits,” Mark-Viverito said. “This legislation will increase opportunities for vendors and reduce the barriers to entry for street vendor entrepreneurs by raising the number of food vending permits while also implementing enforcement mechanisms to ensure that the rules are followed and our public spaces remain safe and vibrant.”

It shouldn’t come as too big a surprise that REBNY’s stakeholders would be opposed to the legislation; after all, street vendors offer competition to brick-and-mortar establishments—but one shouldn’t dismiss all of REBNY et al.’s complaints out of hand.

“Our issue is the proximity to brick and mortar restaurants,” said Andrew Rigie, the executive director of the New York City Hospitality Alliance. Street vendors are often selling similar grub to what the brick-and-mortar businesses are offering a few feet away. “[For another thing,] we don’t want smoke blowing into [customers’] faces. [Plus,] brick and mortar is responsible for the cleanliness of the sidewalk. We don’t want them to leave oil and trash.”

Street Vendor Project’s director, Sean Basinski, whose union consists of more than 700 New York City street vendors, countered that there have been studies showing that food trucks and pushcarts have essentially no negative impact on brick-and-mortar establishments.

“REBNY is [made up of] big office building holders,” Basinski told CO. “All of those people need to go and buy lunch. So if REBNY thought of who filled those office buildings they’d be more amenable to the Street Vendor Modernization Act.”

REBNY testified at a public hearing when the bills were introduced last October. Another group that has been vocal is the NYC BID Association, a nonprofit membership organization comprised of the managers of the city’s 72 business improvement districts.

“Our position on that legislation is that it provides a framework but it needs a lot of work,” said Ellen Baer, the co-chair of the NYC BID Association. She, like other group heads, said the permitting system is “broken.”

Members of Basinski’s Street Vendor Project testified in support of the new bills and said that legislation would increase the number of vendors who could receive a proper license.

‘We want a more organized process that works for the vendors but doesn’t come at the expense of the brick-and-mortar businesses.’ Andrew Rigie, New York City Hospitality Alliance

“It’ll be easier for people who can’t get them yet,” Basinski said.

The bulk of vendors on the street are turning to the underground market, Basinski noted. The greater the supply the greater the likelihood that permits that hit the black market would rent for less than $25,000 for a two-year period.

Rigie said while his group endorses entrepreneurship and the “incredible food being sold on mobile carts,” it does not “believe significantly increasing the number of permits will fix the system.”

Instead, he said new legislation should allow permit holders to sell their certifications when they want to move on so that they don’t feel a need to resort to illegally renting them. And there should be an analysis of vendor placement in the city.

“We want a more organized process that works for the vendors but doesn’t come at the expense of the brick-and-mortar businesses,” Rigie said. “We’ve been waiting for a long time for this issue to be seriously addressed. We just think there should be a group—a council of stakeholders. We should review the issue and come up with recommendations on regulating the sidewalk.”

Banks offered, “Our step would be: If part of the problem is that there’s this black-market economy for the permits, then you should confront that first. And if there’s one person, hypothetically, who had 20 permits…then why are you not going after that one permittee to give up 19 [permits]? There are steps before increasing the number that we think can accomplish the same goal of creating opportunities for the small-business person.”

Levine said the proposals are “still undergoing some revisions based on input from various parties.” In particular he commended REBNY’s contributions.

“REBNY’s input has been constructive and helpful to make us make a better bill,” Levine said.