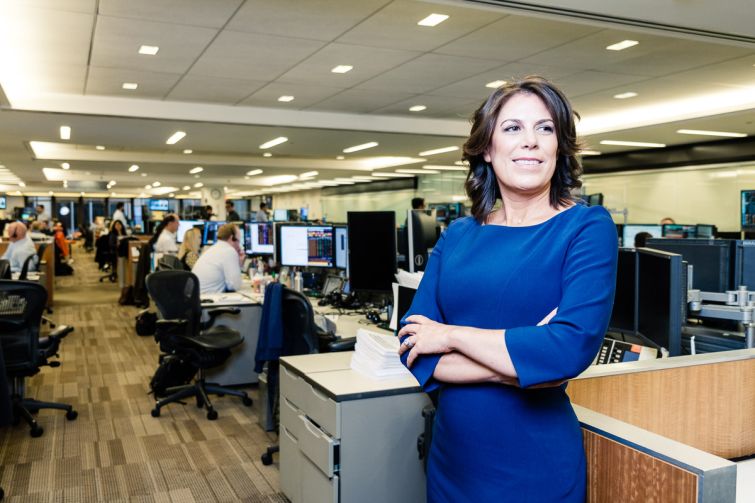 When Kara McShane was 7 years old, her parents bought a charming English Tudor home in Downingtown, Pa. “We naively thought we were going to live in it,” she said.

Instead, her parents saw a different potential for the property. “We got in there, scraped paint, did a bunch of work and turned it into seven apartments and eight garages,” McShane, now the head of commercial real estate capital markets and finance at Wells Fargo Securities, told Commercial Observer. “My dad taught me about commercial real estate and about income-producing assets and how you can have your job and try to make your money, but ultimately you have to worry about the future and have investments trying to work for you.”

The young McShane took that lesson with her into adulthood, and now the 44-year-old (who landed the No. 13 spot on CO’s Top 50 Most Important People in CRE Finance this year) runs some of Wells Fargo’s key commercial real estate businesses, including commercial mortgage-backed securities and commercial real estate collateralized loan obligation securitizations, structured finance and commercial mortgage loan finance. And since McShane joined Wells Fargo in 2010, she has built out its CMBS and CRE CLO business, last year overseeing $67 billion in business across 82 transactions—a drastic increase from $7 billion across eight transactions six years ago (just as the economy was starting to recover from the downturn). Her team—which includes roughly 80 people in New York, Chicago, San Francisco, Charlotte and London—even led the first risk-retention-compliant CMBS deal this summer, WFCM 2016-BNK1.

McShane’s experience with the company actually came as a result of the recession. She came onboard after Wells Fargo acquired Wachovia, which was a major turning point for the bank’s CMBS unit: Pre-crisis, Wells Fargo originated CMBS loans and distributed them through Morgan Stanley and Bear Stearns, but through the merger, Wells then became a broker-dealer. In fact, McShane worked at Morgan Stanley covering its business with Wells Fargo.

At the time, Wells Fargo was looking to build out its real estate capital markets business, so McShane was a natural fit, said Ed Blakey, the executive vice president of specialized lending and investment at Wells Fargo.

“Over the years that she worked with us and our team, she was very effective in developing strong relationships, not only with me but with many people at Wells Fargo,” he told CO. “She’s pound for pound better and smarter than most people in the industry, [and also has the] ability to build relationships and develop long-lasting relationships. Her connection with the broader industry and her influence there was a great value to us, and has been a big distinction as she’s built her career overall.”

While McShane has spent much of her career working in securitization, the business she has built at Wells Fargo reaches far outside of that world. Through the bank’s commercial mortgage loan finance business, the bank “lends to the lenders.”

“A lot of our clients are not just borrowers; they’re also lenders, like the Blackstones and the Starwoods and Rialtos and Ladder Capitals, so they all have debt platforms that have become an important part of their overall businesses strategy,” she explained. “They want financing on their senior loans to help them achieve their underlying return on equity targets and to manage their capital needs. Without financing from us, or another source, they would be constrained in the business that they could do. And then we’re building our commercial real estate portfolio that way with attractive risk-adjusted returns for Wells Fargo and at very comfortable advance rates for us. It’s a great business.”

Indeed, Ladder Capital, one of those lender-borrowers, is one of the largest clients. When the private finance firm started in 2008, Wells Fargo was its main lender, said Pamela McCormack, the chief operating officer and co-founder of Ladder. She recalled hearing about McShane long before they met. “I heard about her as this phenomenal female trader, and I had always really wanted to know her,” McCormack said. When McShane became Ladder’s main point of contact at the bank in 2010, she lived up to those expectations: “She’s been a phenomenal partner,” McCormack said.

The relationship between Wells Fargo and Ladder has more layers to it, however. “She’s a competitor most days,” said Brian Harris, the chief executive officer and co-founder of the finance firm. “Kara always makes you feel like you’re the client, not a competitor. On Memorial Day weekend, she wanted to do a transaction with us. I was in Bayhead, N.J., when she called our people wanting to talk about something. I said, ‘Let’s wait.’ Kara dragged her entire team down to Bayhead, to the beach, and we had dinner that night. I’m not the type of person where that would work, but she certainly won me over on effort, and Wells Fargo can execute well. She could not have been nicer, and ultimately, I will say that we got that deal done.”

McShane’s first job in real estate was actually in high school, when she helped her parents manage the apartments they accumulated over time. When she was a sophomore at Duke University, she landed a summer internship doing industrial sales and leasing for CB Commercial (now owned by CBRE) and, after college, moved to New York and took a job at Sanford Bernstein & Co. as an assistant portfolio manager. Six years later, she became a partner at the firm and earned an MBA in management and finance from Columbia University. In 2002, she joined Morgan Stanley as head of the securitized products group and commercial real estate capital markets division, and for six out of the seven years she was there, Morgan Stanley was the No. 1 CMBS bookrunner.

Beyond her performance, McShane stands out as being a woman who holds an executive position in the commercial real estate industry, according to her friends and colleagues. She currently serves as the co-chair of the mentoring and development committee for Wells Fargo Securities New York Women’s Network and mentors individuals both formally through that platform and informally.

“There have been a million times in my life where I’ve been the only woman in a dinner, or at a conference or a meeting,” she said. “I’m starting to realize that I’ve spent my life sort of fitting in and just being one of the guys, and I don’t necessarily think that that’s the answer. I think women add a whole different level of complexity and thinking.”

She referred to a recent Wells Fargo “gender intelligence training” that she attended, where the focus was “celebrating differences rather than trying to be the same.”

“When you have people that think differently coming together to create solutions, you end up with a better, more successful solution,” she said.

It naturally takes a fighter to get to the top. But McShane stands out for another reason: In 2014, she started her battle with breast cancer.

“What was so overwhelming to me was the outreach from people in the industry, the people at Wells Fargo, my clients, colleagues at competing firms, you name it,” McShane recalled. “People that I didn’t even know knew me or knew what they thought of me…it was so humbling, and it just changed me forever.”

She added, “I’m obviously fortunate enough that it’s been two years and I’m healthy, but it just made me stop and think and change my everyday perspective. I don’t get stressed the way I used to. I know that sounds unbelievable, but it’s true. It also makes me feel like, when I hear that someone is going through something, I want to reach out to that person. It’s not about business; it’s about being a good person, a good friend or a good colleague.”

McShane actually worked throughout all of her chemotherapy and treatment. While she had the flexibility to work from home during that time, Wells Fargo provided her with a more private office, unlike the one that overlooked the trading floor. This way, she was able to come to work in more comfortable clothing, and she didn’t have to worry about wearing a wig when she lost her hair.

“I was able to do all my work upstairs, and my team was super respectful, and everybody on my team just really stepped up tremendously, and from the outside, if you spoke to our clients, we didn’t miss a beat,” she said.

“In this business, people are obviously trying to be good employees and fiduciaries for their respective institutions, but I think Kara brings to her role a very special interpersonal skill, both within her own organization as well as in dealings with clients and partners like myself,” said Nelson Hioe, the co-founder of Raith Capital Partners, who partnered with Wells Fargo on a number of deals, including CMBS transactions. “I remember a time during a period when she was going through her treatments, and even though she was dealing with all of her medical-related issues, she still always made the time to call me and check in on various things, both professional and personal, that were affecting my life. I thought that was pretty remarkable given all the other things on her plate. It’s also a very clear reflection of who she is as a person—dedicated to people and making sure that the folks in her orbit are doing alright.”

McCormack echoed the sentiment. When McShane was going through chemo, McCormack had insisted on going to one of the sessions with her. When McShane began to doze off, she profusely apologized to her friend for being a bad host. “She was more concerned about me being comfortable. That is the Kara I love,” McCormack said.

Like McShane said, she won her fight against the disease. And while she used that period of time to focus on managing her business at Wells Fargo internally, she and her team have been pushing forward and grabbing some of the commercial real estate market’s biggest challenges by the helm.

At the end of this month, on Dec. 24, the risk retention rule from the Dodd-Frank Wall Street Reform and Consumer Protection Act kicks in, but back in August, McShane’s team took the lead on the first CMBS deal compliant with the regulation. “We obviously wanted to lead the market and, even though it wasn’t required, keep our skin in the game,” she said.

They partnered with Morgan Stanley and Bank of America Merrill Lynch, and it was the only conduit deal in 2016 whose 10-year AAA class priced below a spread of 100 over swaps, she said. It priced at 94.

“Classes were five to 15 times oversubscribed. It proved out the theory of risk retention, of having skin in the game, and investors really appreciated what we did, showing that leadership in the market,” McShane continued. “And that’s the position we want to be in. We want to be on the forefront of what the market is doing or best practices when it comes to any of these regulations, and I can tell you that the last five years have been all about regulations. Whether it’s Regulation AB II, Dodd-Frank or the Volcker Rule, whatever it is, Wells Fargo wants to be at the forefront of implementing those regulations and doing it to the highest standard. That’s what we do.”

McShane said that she loves being able to commit capital, and she intends on continuing her career with Wells Fargo. Blakey said he certainly hopes that she will. “She has a very, very bright future,” he said. “She is a naturally strong leader and a very clear thinker, and I believe that she has a lot of opportunity for significant growth within Wells Fargo.”

McShane has an impressive career behind her that is evidently destined to continue on an upward trajectory, but accomplishments aside, her life experience has taught her to appreciate more than the 9-to-5 (though she told CO her days stray from those normal hours).