Tepper Will Go Out! If His Parking Woes Are Alleviated 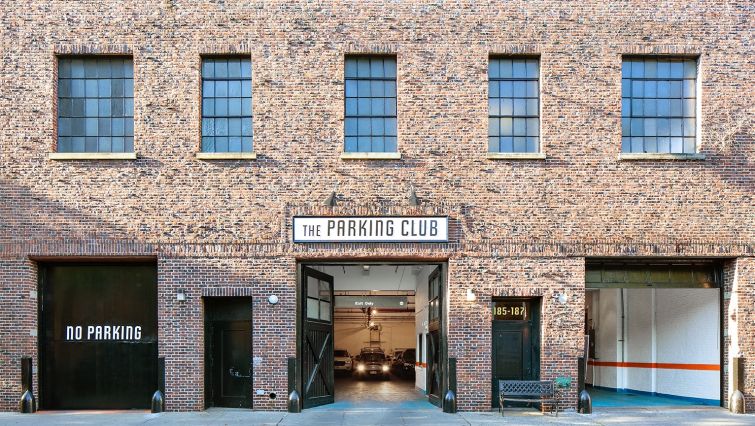 KEEP IT IN PARK: The new Parking Club in Brooklyn rheaarao

“Unfortunately, we’re in this situation that no matter how good the fish is, it won’t equal this parking spot.”

So said Murray Tepper, the “Parking Superstar” protagonist of Calvin Trillin’s novel Tepper Isn’t Going Out, whose main talent is finding parking spots in New York City no matter what. In this scene, Tepper is outside Russ & Daughters on the Lower East Side where the fish is universally considered spectacular.

Most people who own a vehicle in New York City, however, don’t have the talent for finding parking spots. In fact, searching for one is an endless source of anxiety and anger, especially in Brooklyn.

To add to this, the Long Island College Hospital parking garage at the southwest corner of Hicks Street and Atlantic Avenue in Cobble Hill, Brooklyn, shut down late last month.

Fortis Property Group bought the LICH site for $240 million in 2015 and intends to build luxury housing in its place (the hospital closed down in 2014). The demolition of the garage means that the borough is losing around 500 parking spots.

But one real estate firm has a unique proposition to solve this problem. Lonicera Partners started The Parking Club, a valet parking garage condominium at 185 Pacific Street between Clinton and Court Streets, also in Cobble Hill. The idea is to purchase a parking spot rather than rent one. The Parking Club was launched this September and has already sold 20 out of 85 parking condominiums.

“The Parking Club addresses the growing lack of parking in Brooklyn and elsewhere,” Jaime Anthony, a partner at Lonicera, told Commercial Observer. “Many garages and lots are being redeveloped into residential buildings, and street parking has seen a dramatic decrease thanks in part to the new Citi Bike stations.”

It also throws in a 24-hour valet service through an on-demand parking service partner, Luxe. This service is free for the first two years and then comes at a fee of approximately $120 a month depending on the number of times and how it is used. It is available in southern Brooklyn and up to 96th Street in Manhattan.

Pricing at The Parking Club starts at $185,000 (yes, you can afford a small house in many parts of the country for that price), and sales are exclusively being handled by residential real estate brokerage Compass. The brokerage ventured into the commercial real estate business for this project because it saw a synergy between selling residential and parking condos since the demand came from existing homeowners, according to Anthony.

This is clearly a luxury product, Anthony admitted, not one that perhaps middle-class New Yorkers could afford. However, the cost of buying a parking space, Anthony said, can be financed via a home loan. And according to Anthony, buying a parking condo unit gives homeowners a chance to increase their property values by about 20 percent.

Lindsay Barrett, a broker at Compass who handles sales at The Parking Club, is also an owner of a parking condo at the club and echoes the comment about value addition.

“There is no clear way of measuring the demand,” Barrett said. “But as parking becomes more scarce, people value the knowledge that the spot won’t go away and purchase a spot with the same rationale.”

Barrett owns a townhouse in Cobble Hill, about six blocks from The Parking Club, and considers parking one of her biggest hassles. She has lived in the neighborhood for 12 years and used to compete for street parking constantly before she switched to a rental at the now-closed LICH garage. So she regards her new parking condo, which she got at a slightly preferential price that she declined to reveal, both a relief and a “solid investment.”

That being said, the parking condo doesn’t look any different from your typical parking spot in a garage. Each car gets the same nine-by-18 foot space as it does in the traditional rental garage. It is private in the sense that all the spots in the garage are bought and not rented.

Anthony said The Parking Club is currently negotiating nine additional condominiums. He links this demand of buying over renting parking spaces to the closure of garages around the city.

Sure enough, The Corcoran Group has also noticed a demand for personal parking spaces in the neighborhood. The four-story building it markets at 325 Henry Street between Atlantic Avenue and Pacific Street has eight residential condo units. Deborah Rieders, a broker at Corcoran, has already sold seven out of eight of those units and attributes this to one amenity—an automated indoor parking spot that comes with each apartment.

The owner of a condo unit in the building brings his or her car to the lobby, enters a code, and the vehicle is automatically sent to the basement, eliminating the need for valet services. The cost of this is rolled into the price of the condo, which ranges from $2 million to $5.5 million for a unit between 1,250 to 3,000 square feet. Though Rieders couldn’t quantify how parking increased the value of the condo units, she did admit to it being the dealmaker.

“Every single person commented on the ease and convenience of the parking,” Rieders said. “The value added is beyond the price; it makes a difference because there is very limited street parking in the area.”