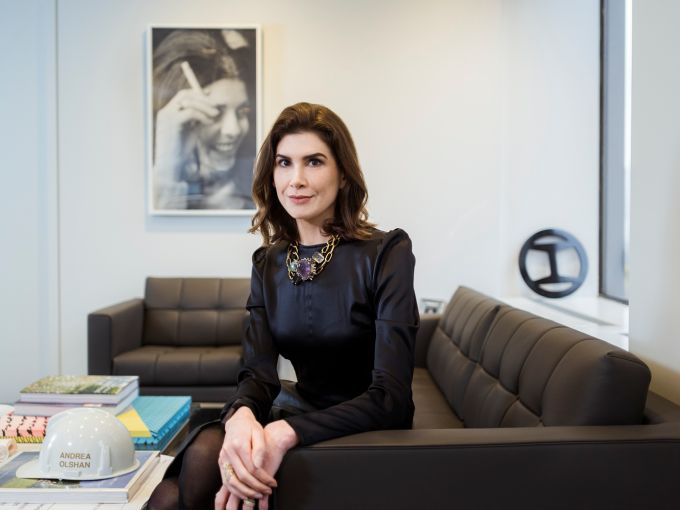 Andrea Olshan is getting ready for her firm’s annual meeting later this month, where she has to address the company.

As her husband, Michael Odell, who works in Olshan Properties’ capital markets division, told her, she has to kill it. That’s because the year wasn’t so great for retail, which makes up a sizeable portion of the 57-year-old company’s national portfolio—it includes about 10 million square feet of retail (and another 3 million square feet of office space).

Olshan, the 36-year-old chief executive (and daughter of founder Morton Olshan), didn’t mince her words about the sufferings of the brick-and-mortar retail market when she met with Commercial Observer last week at her 600 Madison Avenue office between East 57th and East 58th Streets. In the age of online shopping, the physical stores are hurting.

And while on the painful topic, the company made some unwanted headlines in that realm last year when New York institution Zaro’s Bakery announced it would shutter its location at Olshan Properties’ Parkchester complex in the Bronx because the rent was too high.

Old news. In fact, Olshan is currently working on getting the bakery—which had been at the location since 1959 before closing last December—into another spot in the sprawling complex.

But while Zaro’s might have a happy ending, it’s still a tough time for others. Olshan is planning on spending her time at this week’s International Council of Shopping Center’s New York National Dealmaking Conference, to meet with retailers that lease space with Olshan Properties and figure out what’s going on with the market.

She’ll also be passing out hats that say “Make Retail Great Again.” (Does this mean that she’s a Trump booster? She declined to tell Commercial Observer for whom she voted.)

The mother of three young children and a resident of the Upper East Side (she boasts a 15-minute walk to work) discussed exactly how you make retail great again, managing the company’s vast portfolio—which also owns hotels and residential properties—and how she came up through the ranks of Olshan Properties.

Aside from company-branded reports and drawings from her children, her office is outfitted with pieces of baseball memorabilia here and there. You see, Morton Olshan is a part owner of the New York Yankees and her mother is a rabid fan. So, of course we asked how she felt about America’s pastime and whether she’d ever buy her own stake in the team.

Commercial Observer: Last year you guys were in the news because of Zaro’s closing. What was that like?

Olshan: We’re actually talking to Zaro’s now about putting them back in Parkchester. It just didn’t make sense for that [spot in the complex]. Listen, we think that it’s a great use; we also think that Boston Market [which replaced Zaro’s] is a great use. I mean, Boston Market is healthy food that is easy, that is relatively affordable and it’s whole food that’s cooked there.

And quite frankly, we’re landlords. They were willing to pay the rent that we thought that location commanded. And if Zaro’s would have matched that rent and would have matched that deal, we would have been happy to do it. They couldn’t in that location. They have enough of a following, and they’re a good enough tenant that they will do very well in the alternative location that we’re talking to them about right now.

How close is that deal?

We’ve been talking to them for a while. We’re trading paper with them. But it takes two to tango, so I don’t know if it’s going to happen. It would be great for a lot of reasons. We’re excited to have them back. And obviously, if they’re talking to us, I guess the fences could be mended.

What types of tenant do you look for in a complex like Parkchester versus a building in Manhattan?

At any price point, you have to listen to your consumer. The TJX deal [subsidiary Marshall’s opened a store there] that we did was something where there weren’t a lot of retailers like that that were in the market.

Blink Fitness is another concept. There are not a lot of gyms that are affordable and yet have a great buildout. We took a basement space and built out Blink Fitness. I think it’s a real service to the community.

We constantly look at what else is around. So if there are so many delis, you don’t want to open up another deli. We look for holes; we do what we call “a void analysis.”

How are you gearing up for ICSC this year?

Every Friday we have a portfolio meeting, and we go through our entire commercial portfolio. We go through every property. And it’s a real chance for all the different operating disciplines to coordinate and to talk. We’re sitting in the conference room—you’re there since 8 a.m.—and it’s usually like a three-hour meeting. We were talking about how challenging the brick-and-mortar retail business is right now.

We constantly slice and dice that to understand from a very fundamental standpoint what’s working and what’s not working. We’re having one of those types of discussions and Josh Birns, who is the director of leasing for us, said, “See, we’re just trying to make retail great again.”

We’re really, really focused on being strategic and smart in very murky waters in retail right now. We thought it was funny. He said, “I finally got to use my marketing degree.”

So how do you make retail great again?

You have to be incredibly compelling as an experience to get people into the store. Apple to me is such an interesting case study.

How do you think the hats are going to be received given the political climate this year?

We all need to have a sense of humor. I think having a good chuckle after a very bruising year of politics is good.

Listen, it’s not easy to be in retail right now. I think having a good chuckle at a shopping center convention—there are not a lot of chuckles happening—so I think that’s probably a welcome respite.

What was the learning process for you coming into your role as CEO?

I started at the bottom [in 2004]—without an office, because [my father] didn’t want to invest in building a partition for me. So I sat at his conference table, and I became a professional eavesdropper. I just listened to him all day, every day. I went around the office and I asked everyone there, “What can I do to help you?”

I remodeled and totally reimagined 99 Hudson Street in Tribeca [in 2006]. It was a 22 percent occupied office building. We had CUNY Graduate School; they were paying low $20s per square foot in rent.

I’m not telling you this story because I’m such a genius. I was given one of the best corners in Tribeca to try to do something with. So the world was certainly my oyster. But it was one of those things where it still made money. No one really thought much about it.

We looked at it as a residential conversion to condos. We looked at selling the whole building. But we ultimately renovated it and made it Class A office. It’s amazing loft office [space]. We restored the lobby and the exterior. I was able to go in front of landmarks twice, personally.

You said that it wasn’t on people’s radar, but once you had it as this Class A office building, what was everybody’s reaction?

They were thrilled. I really had incredible anxiety about coming in. My father raised me to work harder than everybody else. When you go into a meeting…be more prepared than anybody else. He always studied for a meeting, and he called it “studying.” That was his philosophy.

My paranoia—and just thinking about it in the most negative sense—is I didn’t want people to think that I’m coming in and making their lives burdensome in any way, or I’m doing anything that I didn’t deserve to be doing. I really wanted to help. So people were generally appreciative because I approached it that way. I said, “What do you have no time for, but you know that my dad’s going to be upset with you about if you don’t do it.”

So he’s the chairman now. You’re the CEO. And your husband is in the capital markets division since 2011. What’s the dynamic like between everybody?

It’s amazing, actually. My husband [of six years] has a very open and honest relationship with my father, really with my whole family. Because he’s straightforward, he really has earned my family’s respect in terms of his opinion; he doesn’t tell you what you want to hear.

I can certainly attest to the fact that he does not tell me what I want to hear. He’s actually one of my sharpest critics. He said to me this year, “You just really have to kill it at this annual meeting. No pressure, but you just have to crush it this year because the market is down and people might be negative. So you really have to do a great job.” I was like, “No pressure. Thanks.”

We’ve also been very lucky in that his partner in capital markets similarly is almost like a family member. [They both add] a perspective to the family—where I’ll say something to my father and he wants a second opinion. I totally respect that. And he will go to them, and he will speak to them, listen to them. He challenges them; they challenge him.

If [my father] disagrees with me, it doesn’t become this pitched battle between the two of us. He can gather his information on his own and make a decision.

Are you as big of a Yankees fan as your dad and would you consider buying a piece of the team yourself?

So, my father really bought it as an investment. My mother is the biggest Yankees fan. My father would probably not watch as many games as he does, but for the fact that when you hear my mother screaming in the other room when she’s watching it, you might as well watch the game. That is how he ends up watching every single game.

So are you a big baseball fan?

It’s sort of interesting that a few real estate people are owners in the team. It’s the real estate team. Would you ever buy in?