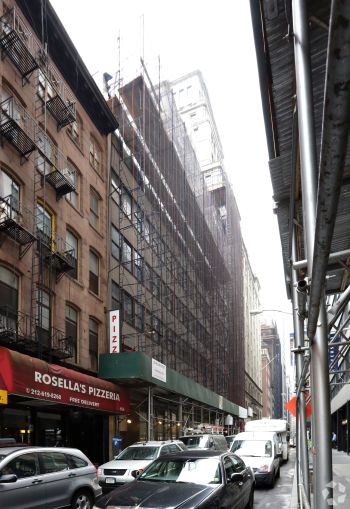 The Port Authority of New York & New Jersey’s deal to relocate its medical offices to 156 William Street has closed, the landlord announced in a press release today.

The agency’s Office of Medical Services will occupy 8,459 square feet on part of the fourth floor, according to the release from William Macklowe Company. The division plans to move into the building between Ann and Beekman Streets from the Union Square area sometime in spring 2017.

As Commercial Observer reported in October, the agency planned to enter a 15-year lease with a five-year extension option. Over the course of the lease, the agency will pay $8.3 million in rent (it will pay another $3.5 million if it takes the extension).

The medical offices, which provide services to promote health and safety for the agency’s employees, have been based at 233 Park Avenue South between East 18th and East 19th Streets since 9/11—when the Port Authority was divided into various locations. The Port Authority is headquartered at 4 World Trade Center.

Paul Wexler and Josef Yadgarov of Corcoran’s Wexler Healthcare Properties represented both the tenant and the landlord in the deal.

“In an area with limited medical space that has been flooded with thousands of residential units, the Downtown medical building at 156 William Street is an amazing opportunity for a forward-thinking tenant to collaborate with the William Macklowe Company, one of the city’s most accomplished developers,” Wexler said in prepared remarks.

William Macklowe Company bought the 250,000-square-foot 156 William Street in 2013 with LaSalle Investment Management. The new owners embarked on a conversion of the 12-story structure into medical offices, which are anchored by Weill Cornell Medical College with 85,000 square feet.

Along with sealing up the Port Authority relocation, the landlord also announced a 17,000-square-foot renewal with Riverside Research Institute. The firm, which leases the whole ninth floor, has been based at the Lower Manhattan property since 200, according to CoStar Group.

The new Riverside Research Institute deal is for five years and four months, and had an asking rent of $60 per square foot, according to a spokesman for the landlord. Richard McBride of Richard McBride Real Estate Services and Craig Reicher of CBRE represented the tenant, while Wexler and Yadgarov represented the landlord. McBride did not immediately return a request for comment, nor did Reicher via a spokeswoman.

“Given its strategic location across the street from New York Presbyterian/Lower Manhattan Hospital and the relative dearth of nearby medical offices to serve the Downtown community, we knew that targeting healthcare tenants was the right prescription for this asset,” William Macklowe, the chief executive officer of his eponymous firm, said in a statement.