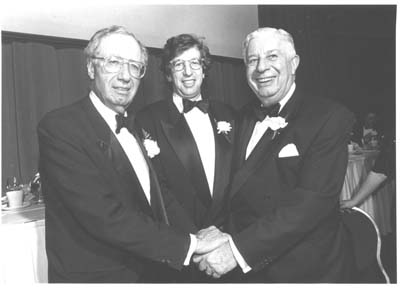 Jack Rudin, the patriarch of the Rudin family who oversaw a vast New York City real estate empire alongside his late brother Lewis, died at his home yesterday. He was 92.

The cause of death was pneumonia. Rudin’s passing was peaceful, according to a press release from the family.

He was part of the second generation to run Rudin Management Company—the 92-year-old firm with a real estate portfolio that includes 345 Park Avenue between East 51st and East 52nd Streets, 3 Times Square between West 42nd and West 43rd Streets and 1 Battery Park Place between Pearl and Bridge Streets. Jack was instrumental in developing all of those properties.

Until his passing, Jack served as the chairman of the company, which was established in 1924 by his father. He had previously served as president of the family-owned company. A 2014 profile of the Rudins in The Wall Street Journal noted that Jack spent his career focused on construction and operations, while younger brother Lewis, who died in 2001, was the public face of the company.

Both, however, were active in the New York City civic scene. The brothers were the original sponsors of the Five-Borough New York City Marathon in 1970. They requested that the trophy presented to the winner be named for their father and avid runner Samuel Rudin (it is still named for the family patriarch, who died in 1975, and is presented by Jack’s grandsons).

He was also involved in a slew of civic organizations and charities, sitting on the board for such places as Memorial Sloan Kettering Cancer Center, Jazz at Lincoln Center and the American Museum of Natural History.

Jack was born on June 28, 1924 in the Throgs Neck section of the Bronx to Samuel and May Rudin. His grandfather, Louis Rudinsky, was an immigrant from Belarus who bought his first property in 1905—launching what would become a multigenerational New York City real estate dynasty.

The family relocated to Manhattan when Jack was still young. He attended P.S. 166, followed by DeWitt Clinton High School and had a brief stint at City College of New York. In 1942, he enlisted in the United States Army and fought in contentious battles during World War II including the Battle of the Bulge. Rudin, according to the press release, was among the U.S. soldiers who liberated Nazi concentration camps at the end of the war. He was awarded the Bronze Star—one of the highest designations a soldier can receive.

His first wife, Roberta, died in 1983. Jack is survived by his second wife Susan; children: Eric (currently the president of Rudin Management) and his wife Fiona; Madeleine Rudin Johnson and her partner Bruce Barnet; Katherine Rudin; grandchildren: Grant Johnson, Samuel and Nicholas Rudin; as well as stepdaughters, Inda Schaenen and her husband Michael Dee and their children Stella, Oliver and Nathan; and Eve Schaenen and her husband Frank Hentschkerand their children, Claire and Leo; nephew William Rudin (currently the chief executive officer of Rudin Management) and his wife, Ophelia and their family; niece Beth Rudin DeWoody and her husband, Firooz Zahedi and their family; and sister-in-law Rachel Rudin.

Funeral services will be held at 11 a.m. at the Central Synagogue at East 55th Street and Lexington Avenue.