Under Construction: The Retail Plaza at 111-115 Broadway 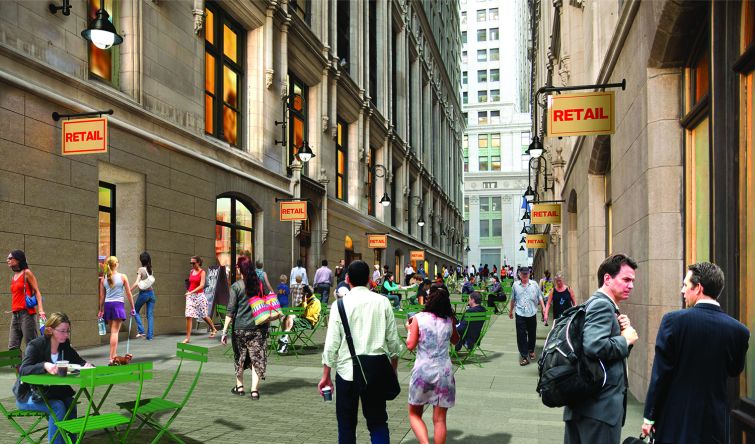 A rendering of Thames Street, which runs between 111 and 115 Broadway.

There are plenty of famous landmarks (official and unofficial) in the Financial District: The Charging Bull, Federal Hall, the New York Stock Exchange. And the streets are pretty well trod by tourists: Wall Street, Fulton Street, Broadway.

Then there’s Thames Street between Broadway and Trinity Place: “The street that no one ever goes through except delivery trucks,” said Richard Cohen, the president of Capital Properties.

It’s a dark 270-foot stretch between the landmarked 111 and 115 Broadway buildings, which are known together as the Trinity Centre. So Capital Properties, the owner of the two structures, has a plan: Close the street to vehicular traffic and transform the lane into a street market.

“It will become like Stone Street. It’s going to become a marketplace,” Cohen told CO referring to FiDi’s buzzy strip of eateries and watering holes. “But unlike Stone Street, which is off by itself, there’s the World Trade Center Memorial, Trinity Church and Wall Street nearby. It should be a terrific amenity for the city and the buildings.”

The project is a part of an extensive renovation of the two buildings, for which the landlord hired architecture firm Beyer Blinder Belle—the company that designed the popular street market on Stone Street.

A $15 million revitalization of the façade is already underway, and it will be followed by an upgrade of the lobbies of both towers. Although only the exteriors are landmarked, the original 1907 appearance of the buildings’ lobbies, which feature marble walls, metal work on the ceilings and stained glass, will be kept intact. The security desks, however, will be shrunk by reducing the quantity and size of equipment, which will make the lobbies appear larger.

For the Thames Street part of the equation, Beyer Blinder Belle envisions filling the street with granite pavers and making it the same level as the curb, eliminating the street’s depression.

The architects also plan to open up blocked up windows and doorways on Thames Street that have been shuttered for decades (for unknown reasons), according to Richard Metsky, the lead architect on the project. The new glass storefronts from those blocked spaces will be filled with retailers and restaurants. The landlord has also hired consultant Philip Habib as well as Al Borden of The Lighting Practice, who designed the lighting at the Empire State Building, to create historically accurate street lights for Thames Street.

“This neighborhood has now become a 24/7 neighborhood, and it’s much more dynamic and vibrant. It’s no longer 9-to-5,” Metsky said. “There is a potential to produce a really compelling space. You want to transform Thames Street into an extraordinary public amenity—a very dynamic space and add a new layer of urban life to Downtown.”

Cohen couldn’t tell CO yet how much square footage he will have between the two buildings for retailers on Thames Street.

Because this project will raise the manholes, the landlords are in talks with the city’s Department of Environmental Protection. But they are also looking for permits from the Department of Transportation (to close the street), Department of City Planning, the Landmarks Preservation Commission and are talking to Community Board 1 and the Downtown Alliance for community input.

With all those parties involved, the Thames Street portion of the renovation project isn’t expected to be completed until the end of 2017. But, hey, this is just a few short blocks from the Oculus and World Trade Center site, so we think the locals know a little bit about being patient enough to wait for a good thing.