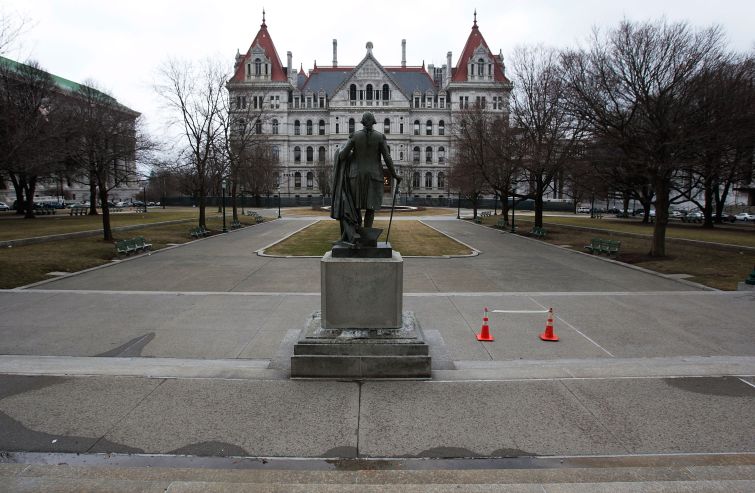 Much like the rest of the country, the New York State Senate is seeing red.

Republicans beat back an effort by Democrats to claim control of the Empire State’s upper chamber, winning a razor-thin majority in yesterday’s general election.

Real estate players are rejoicing that the G.O.P. (mostly represented by legislators from upstate and the suburbs) will keep the lead over downstate Democrats who have often aligned with rent-stabilization groups.

“The Republicans keeping the majority in the Senate is something that is encouraging from a rent-regulation perspective,” said Robert Knakal, the chairman of New York investment sales at Cushman & Wakefield. “Even with a Republican Senate in the past, rent regulation has gotten increasingly pro-tenant to the point where some multifamily property owners here have given up on trying to build portfolios of regulated housing.”

Sherwin Belkin, a partner at law firm Belkin Burden Wenig & Goldman, said a Republican majority in the state Senate also creates a balance of power with the Assembly, which holds a strong Democratic majority.

“This is vital for the multifamily industry,” Belkin said in a statement. “The Assembly has shown that it prefers to demonize the real estate industry rather than work towards programs that spur affordable housing, while also allowing business to flourish.”

The timing is especially relevant given the lapse of the 421a tax abatement, which significantly reduces property taxes if 20 percent of new rental housing built on a given site is designated below market value. The tax break, which expired in January, has led to the stalled development of multifamily rental housing, especially in New York City, where land and construction costs are high.

Gov. Andrew Cuomo has worked will state Senate Republicans since they took the majority three years ago, despite his recent effort to give the chamber to the Democrats. Republicans have pushed through balanced and on-time budgets. But its leadership has been maligned with corruption in the last few years, with its ex-Majority Leader Dean Skelos and his Deputy Tom Libous being convicted in separate corruption charges.

Arzt, a political consultant, added that a Republican-led state Senate would allow for more real estate bills, such as 421a or rent regulation, to be more balanced between interests. A Democratic incarnation of the chamber would be more in favor of tenant rights in these types of bills, experts told COF.

“Let’s see what happens to the 421a legislation,” Arzt said. “Certainly any rent-control legislation will be carefully scrutinized. Affordability issues will be looked at.”

The Real Estate Board of New York, in a statement, heralded the victory by Republicans in the state Senate, noting that REBNY’s political action committee, Jobs for New York, was active in voter outreach during this year’s state elections.

“The people of New York have once again voted for a fiscally responsible government that holds the line on spending, controls taxes, looks to create good middle-class jobs and helps create the housing we need for a growing economy,” REBNY President John Banks said in prepared remarks. “We would like to congratulate state Senate Majority Leader John Flanagan and his first-rate team of candidates.”

Jobs for New York spent heavily in support of Republicans who represent districts in Upstate New York and Long Island, according to campaign filings. The group poured more than $664,000 into a total of four Republican state Senate campaigns, according to the most recent disclosure filing with the state.

The PAC has been a powerful fundraiser and spender in city and state politics. At the end of October, it had $600,027 on hand, according to disclosure documents. A November 2015 analysis by Commercial Observer found that 10 of the city’s top landlords and developers donated $1.2 million to Jobs for New York between 2013 and 2014, which was spent in support of City Council and state legislature candidates.