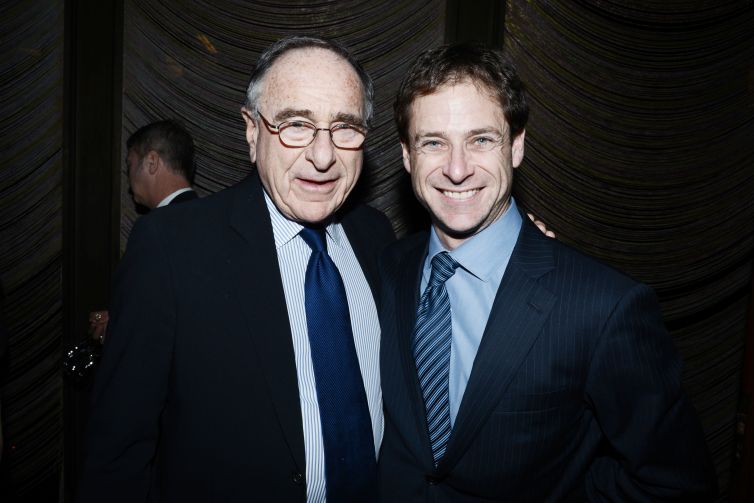 Just when you thought the billion dollar-plus divorce between Harry and Linda Macklowe was the biggest news to rock the famed real estate family, buckle up because there’s some new drama just in time for the holidays: a Nov. 14 lawsuit pitting Harry against his son, William “Billy” Macklowe.

“There were a couple of empty seats at the Thanksgiving table this year,” said a source close to the family.

The suit contends that the younger Macklowe threatened to cut off his father’s administrative services earlier this month—including human resources, payroll and email—and co-opted two websites that belong to Harry.

Harry is said to have “absolutely blindsided” Billy by the legal action.

“[Harry] went in and filed this ex parte, meaning that he didn’t even serve [Billy],” a source close to the situation told Commercial Observer on the condition of anonymity. “He just went to the court and filed it. Billy received an email about it and that is how he found out.”

Did we mention that Harry is asking for $300 million in damages from his son in this supreme court lawsuit? (In one court document, however, Harry’s camp mistakenly asked for a measly $300,000.)

The suit comes at a particularly tenuous time for the family—namely the extremely expensive divorce. “Under a gentleman’s agreement, Billy has been running his father’s IT and HR services,” said a source close to Billy. “Now all of a sudden, in the middle of a divorce battle, Harry starts this?”

“MIP has been advised that MM will effectively terminate said services,” the court filing says. “If this court does not… [intercede, Harry Macklowe and his] employees will be irreparably harmed and will be left with no adequate legal remedy to right this clear and unequivocal wrong.”

“The litigation started when Billy Macklowe informed Harry Macklowe that he had the intent to terminate processing the payroll as well as interrupt and potentially terminate Harry’s emails, which would have had material damage,” said a source familiar with the situation who spoke with CO also under the condition of anonymity due to the pending litigation. “I think it had been Harry’s hope that this could have been resolved in a different fashion certainly, but anyone who felt that their businesses’ normal processes were going to be interrupted would have to take some kind of action to prevent that from happening.”

Not so, said a source close to Billy. “Harry [filed the complaint] two weeks after he and Billy entered into the agreement by which Harry would assume responsibility for his own IT, human resources and payroll and had initiated the transition. Harry can’t substantiate his claim [of a threat on Billy’s part] because it simply isn’t true.”

Billy’s side filed a stipulation [dated Nov. 14], which states that he will continue to provide all of these services. “[Billy] isn’t looking to turn off services or do anything nefarious,” said a source close to Billy. “When he heard this was happening it was after they’d been negotiating the proper terms for a transition of services and an agreement had already been signed that said ‘These services will continue to be provided to Harry’s company.’ ”

The complaint further states that Billy is seeking to “dilute the Macklowe trade name” that has become synonymous with Harry’s real estate empire specifically, according to the suit. Harry claims ownership of both macklowe.com and hmacklowe.com.

To provide a little backstory, when Billy, now 48, left MIP in 2010, Harry, now 79,  “allowed” his son to take over MM as well as certain properties “as an affectionate father and out of great admiration and care for his son,” according to the complaint. The complaint further asserts that Harry and Billy agreed that in exchange for Billy taking over MM, Macklowe Management Co. would continue to provide administrative services to both companies.

“Harry has not sought out a contentious relationship with his son,” a source close to Harry told CO. “There’s a lot of history that points to Harry launching Billy successfully in the world and supporting him as a young man, a professional and a member of his family.”

This comes as news to Billy’s supporters.

“The relationship between Billy and Harry is very complicated, and the way Harry sees the world is very skewed, otherwise he wouldn’t be suing his son for $300 million and asking him for something that he gave to him [Macklowe Management Co. and the domain names],” said a source close to Billy. The claim that Harry “launched” his son is also one that comes under dispute. “I wouldn’t say Harry mentored Billy,” that source said. “When he got out of a bank training program and went to work with Harry he went to work in various parts of the business at Billy’s insistence, because Billy’s training had been in the financial aspect of real estate and he wanted the hands-on, nuts-and-bolts experience.”

Further, sources close to Billy say that he was responsible for pulling Harry out of some sticky situations over the years.

Harry acquired the Equity Office Portfolio in 2007 for $7 billion with a $5.8 billion one-year financing from Deutsche Bank and a $1.2 billion personal guarantee from Fortress. The seven-building portfolio was seized by creditors, and Harry was forced to sell four of his other properties, including the General Motors Building.

“It was a bad deal,” said a source close to both Macklowes of the acquisition. “He didn’t get extensions and he didn’t work on a proper capital solution [to pay down debts].”

Added the source: “Harry likes to buy and to acquire and doesn’t always think of consequences. Billy put his life on hold and spent three years getting Harry out of a personal debt obligation, looking down the loaded barrel of very rapacious lenders who had the ability to push the button on his dad and force him into bankruptcy. Billy stopped all of that from happening.”

The current lawsuit states that at or around the time Billy branched off from Harry’s company in 2010, Billy took over the domain name “hmacklowe.com,” which Harry asserts is the “brand name and creative license” of Harry.

Harry’s side maintains that macklowe.com is his corporate domain. “Harry was the first person in the family to go into the real estate business and has an extensive, 50-year career that has shaped the New York City skyline that we all know and love,” said the source close to Harry. “The company name has been Macklowe Properties and the domain that Harry has used in the business, into which he welcomed his son, is Macklowe.com. Clearly that has been the corporate domain.”

Although Billy was “allowed” to take over MM, per the lawsuit, Harry asserts that he still owns and controls Macklowe Management Co. and “to the extent [Billy] believes otherwise, any information provided in support of said assertion was obtained through duress, mistake and/or undue influence.”

A spokesperson for Harry responded, saying: “This agreement is not relevant, as it has absolutely no bearing on the issue of ownership of the domain names of macklowe.com and hmacklowe.com.”

Regarding that particular gripe: “Billy would happily give Harry hmacklowe.com, and Harry knows that,” said the source close to Billy. “Why he included it in this complaint is beyond me. But it shows how irrational he is being. Billy has used macklowe.com to do business for six years, and he shouldn’t have to give that up.”

Sources close to Harry maintain that hmacklowe.com was never the issue. “Harry has always requested macklowe.com, [Billy] has only been willing to give over hmacklowe, which is not used by anyone.”

The source went on to say that, for Harry, “no offer and no agreement would be sufficient that didn’t include the principal domain of macklowe.com, which redounds back to Harry’s company. It was originally registered by Harry and then at some point—without Harry’s awareness—re-registered by Billy.”

“That’s not accurate at all,” a source on Billy’s side said. “In 1998, while Billy was working there he set everything up including the building of the website, registering the domain name, putting emails together.”

The source on Billy’s side went on to say “The companies have been operating this way for six years, with Billy using macklowe.com, without issue. Why now is there a problem and a lawsuit?”

The real estate patriarch is now seeking a temporary restraining order against Billy’s “draconian actions,” in the words of the suit, as well as an inspection of Billy’s books and records to determine any amounts owed to MIP, an accounting of all amounts owed to MIP, a declaratory judgment that MIP is the owner of Macklowe Management Co., and any damages resulting from MM’s “breach of fiduciary duties to MIP.”

All this is happening under the cloud of the divorce Harry announced in June, leaving his wife of 57 years, Linda, for his mistress Patricia Landeau.

“Billy has sided with his mother through this,” a source close to Billy said. “I don’t know why Harry is going after Billy, but you look at the timing and you connect the dots. It’s venomous, and very one-sided on Harry’s part.”

Sources close to Harry say the two court proceedings are unrelated. “What the matrimonial case is about is an action for divorce that was commenced by Linda on a no-fault basis—they have been married for 57 years and now both parties have told the court they want a divorce. This [complaint] is about [Harry] Macklowe’s access to his domain name and his emails.”

A judge will hear out the Macklowe men on Wednesday.